Fancy an afternoon of sunbathing by the water, a boating excursion, or a quiet picnic after a game of pétanque? Look no further than Berlin’s Landwehrkanal! Kevin Caners takes us on a journey along the canal’s grassy shores. 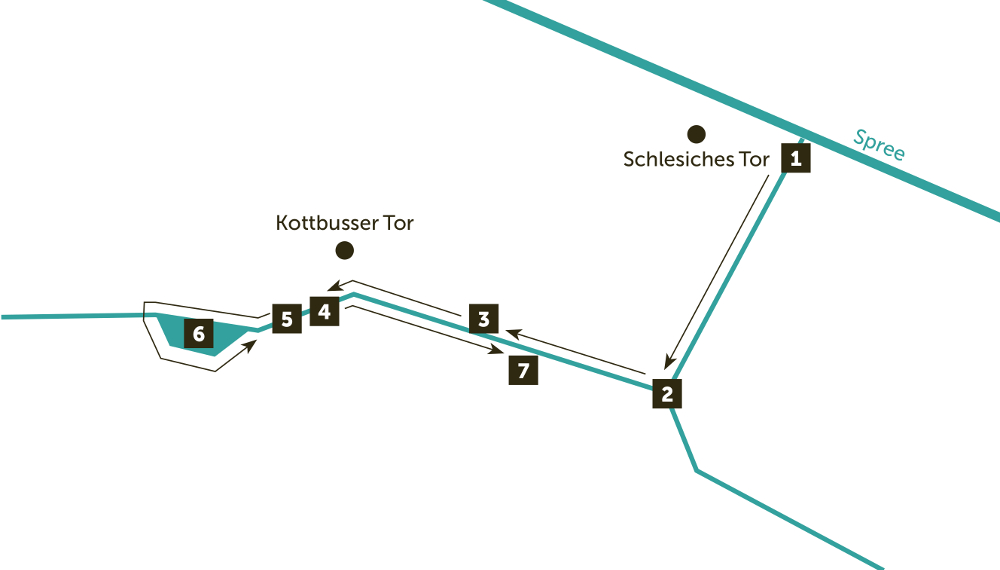 How much better is that Augustiner in your mind, than the Sterni in your hand? It’s easy to fantasize about what you don’t have, and when it comes to vacationing it’s no different. With budget airlines just a few clicks away, we find ourselves dreaming of jetting off to the south of France or the beaches of Croatia for a slice of paradise. But before ending up in Schönefeld’s crowded queues, it’s worth exploring a truly staycation-worthy gem at home: the Landwehrkanal.

Our journey starts in Kreuzberg, at the Oberschleuse (1) east of Schlesisches Tor, where the Landwehrkanal begins. If you happen to be boating down the Spree, this is where you can access the canal (from April 1st to October 31st, from 11:15am to 8:45pm). Just look for the small speaker with a button at the lock’s entrance, and the (at times grumpy) lockmaster will let you through. If, like most people, you’re on foot, head south down the Görlitzer Ufer west-bank towards Neukölln and pass under the former railway bridge, which is now a footpath that connects Görlitzer Park with Alt-Treptow. It’s a remnant of when Görlitzer Park, instead of being the domain of frisbee players and drug dealers, was home to Görlitzer Bahnhof. The railway which passed over the canal used to ferry up to 70,000 passengers a day to Cottbus and Görlitz before the Cold War and the Wall ensured that it would never be used again. Pass the railway bridge to reach the Dreiländereck (2), where the Landwehrkanal meets the Neuköllner Schifffahrtskanal (which heads east and eventually travels under Sonnenallee). Here, groups of seniors play surprisingly professional-level ping-pong on the park’s two tables, while parents watch their kids roam on the impressive Spielplatz. Don’t be surprised if the smells of grilled Wurst, tofu and veggies waft in your direction: grilling is allowed and is relished by both the hipsters and the Turkish families that populate the neighbourhood.

TIP: If you don’t feel like schlepping your gear across town to organise your own BBQ, you can also grab a snack and a beer at the Jockel Biergarten (Ratiborstr. 14c), and sit at one of its many outside picnic tables.

Continue following the canal around the corner and you’ll reach the Paul-Lincke-Ufer (3), which straddles the northern side of the canal for a kilometer and a half. It is named after famous Berlin composer, Paul Lincke, who lived on Oranienstraße and in 1904 penned “Berliner Luft”, a song that celebrated the feeling of freedom which Berlin, to this day, is famous for. The Paul-Lincke-Ufer riverbank basks in the sunshine most of the day, and you can easily laze away entire spring and summer days with the birds, the bees, and the flowers.

TIP: Grab a spot at one of the cute outdoor wooden tables of Pavillion am Ufer, (Paul-Lincke-Ufer 4, Mon-Fri 9-22, Sat-Sun 10-22) a small café, nestled on the side of Thielenbrücke. A perfect place for an espresso and waffles al fresco, while watching dogs, cyclists, and the boat traffic slipping by…

Down the walking path, you’ll soon reach the pedestrian-only section of the Paul-Lincke Ufer. Instead of cars, you’ll find a series of rectangular gravel patches surrounded by wooden perimeters. These are the Boules courts, and you’re likely to find old men joking alongside Berliner hipsters and punks, competing over a game of pétanque. The courts are managed by the Boule Club Kreuzberg, which runs tournaments and events throughout the summer. On normal days, they’re free for the taking. So bring a set of boules balls and a pair of friends and step into one of the open courts for an easy-going afternoon match. Unfamiliar with the game? The rules are posted on the nearby bulletin board, and you can probably get some tips from the many seasoned players around. If pétanque isn’t your thing, there’s another perfect patch of grass to enjoy a picnic. Or go further down, and find a cozy spot under one of the many weeping willows alongside the students catching up on reading material.

Past the chaos of Kottbusser Straße, you quickly reach the tranquillity of Fraenkelufer (4). Here you can admire the swans or take in the view of some of the nicest remaining Altbau buildings in Berlin on the opposing Planufer. Moving on, you’ll soon reach Admiralsbrücke (5). The wrought-iron bridge from 1880-82 is one of the most handsome spanning the entire Landwehrkanal. With only sparse auto traffic, large sidewalks, ample sun, and inviting cement pilings, the bridge has become a popular spot for young Berliners of all backgrounds to come together, relax and enjoy late-night Späti drinks. On warm summer days, expect police to (gently) usher revellers away once the clock strikes 10pm to keep residents placated.

TIP: Hungry? Just at the corner across from the bridge, Il Casolare (Grimmstr. 30, Mon-Fri, 12-24) offers some of the most famous pizza in town. Dig in under its covered patio, or take away and sit on the bridge!

Just after Admiralsbrücke, the canal widens out into Urbanhafen (6). With so many people relaxing on its shores it’s hard to imagine that this was once a busy port with industrial ships lining its waters. Today, the gently sloping south bank of the canal across from the Klinikum am Urban hospital provides the perfect place to gather, and alongside the ducks, you can spot hospital patients in wheelchairs chatting with friends. On the north side of the bank, there used to be the Luisenstädtischer Kanal, which found little use and in 1926 was converted into parks and gardens, including today’s Oranienplatz. Continuing west, the canal becomes less idyllic after Hallesches Tor with busy sections of road. But it is worth exploring further, particularly when you reach the Tiergarten, where it resumes its function as a quiet oasis from the city.

TIP: With its industrial past, the Landwehrkanal is unfortunately not suitable for swimming. But for those particularly hot summer days you can escape the heat at Sommerbad Kreuzberg (Prinzenstraße 113-119), which is located a short walk away from Urbanhafen.

Heading back east and crossing Kottbusser Damm on the Neukölln-side of the canal (opposite of Paul-Lincke-Ufer), you’ll reach the Maybachufer (7). What the street lacks in sun and good spots to sit by the water, it makes up for in spades with its markets. On Tuesdays and Fridays (11-17:30) the Maybachufer is home to the beloved Turkish market, full of vendors selling linens, jewellery, spices, hot snacks, fruit and vegetables. Swing by at the end of the day and the fruit vendors are practically offloading their produce for free! So don’t be surprised if you return home with an entire box of limes when you really just wanted one – and at a special price of €1, who could blame you? If you continue east, just past Hobrechtbrücke, you’ll find the Nowkoelln Flowmarkt on every other Sunday. Here, you’re sure to score second-hand finds or handcrafted art from one of the many friendly vendors.

TIP: Down Maybachufer past Pannierstraße and first left, you’ll arrive at Lohmühlenplatz. Here, on the high banks overlooking the Dreiländereck triangle, is truly one of Berlin’s best spots for admiring the sunset. Take a deep breath and watch as the remaining pleasure boats linger below and the sky turns to shades of pink and purple. 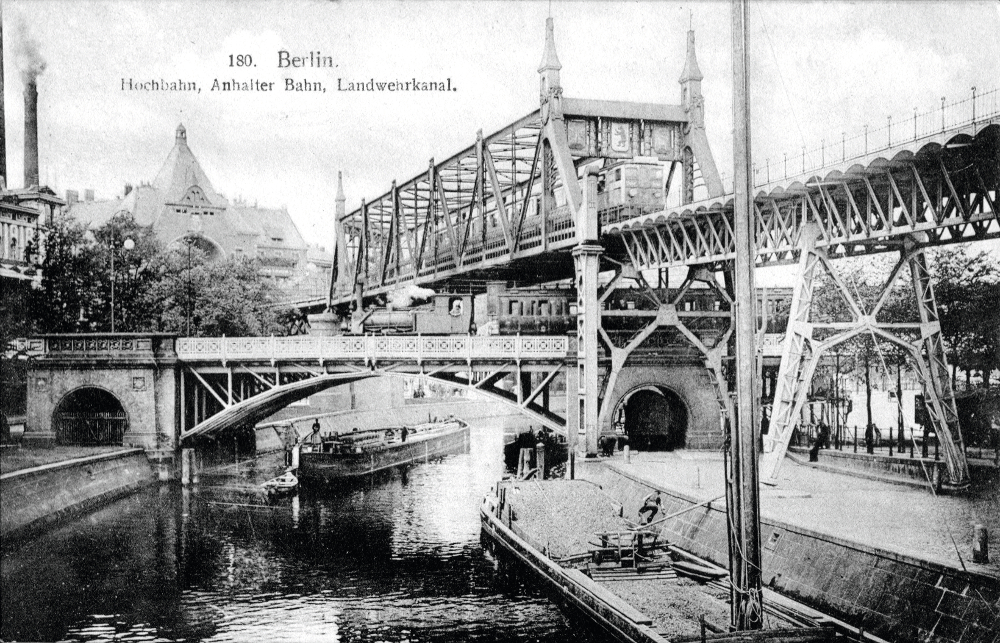 A little history: Birthed by industry

At the beginning of the 19th century, Berlin was in the throws of the industrial revolution and the Spree was overcrowded with boat traffic. In order to keep up with the transportation needs of the city, in 1845 King Friedrich Wilhelm IV gave the order to design a new canal and put city planner Peter Joseph Lenné in charge. Within just a few years the Landwehrkanal proved indispensable to the rapid development of Berlin during the latter half of the 19th century by facilitating the transportation of raw building materials. The canal didn’t only reduce the pressure on the Spree, it helped build this city! The Cold War and the Wall led to the demise of the canal as a waterway of industry. Although briefly used during the reconstruction of Postdamer Platz post-Wall, today the canal is the domain of pure recreation.