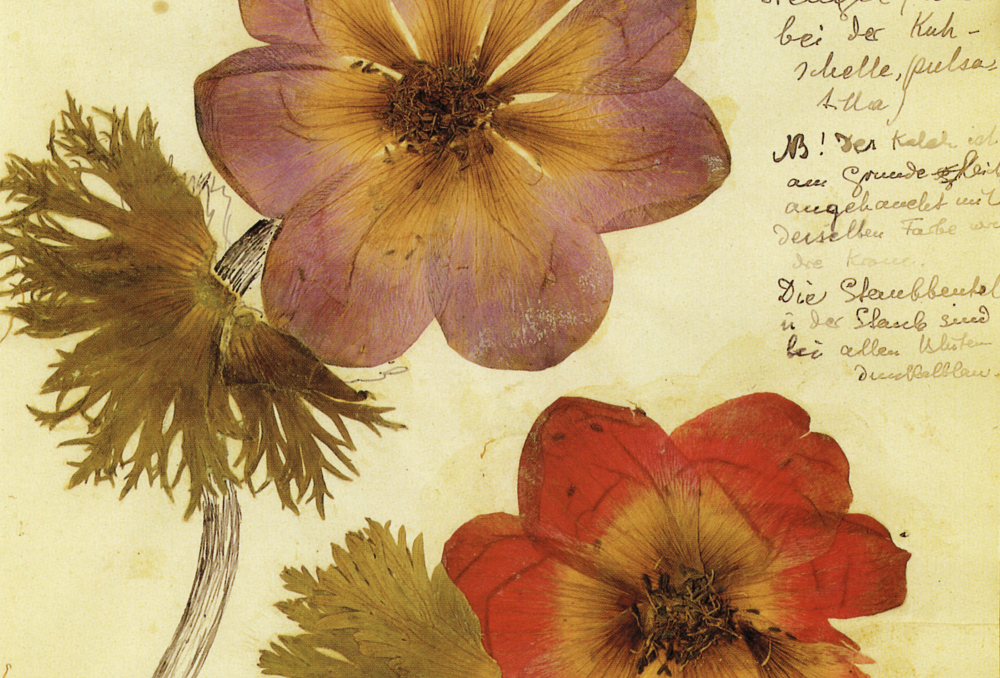 During her Berlin years, Luxemburg developed a passion for collecting plants. She meticulously catalogued her finds in 18 notebooks in the last six years of her life – up until the October Revolution put an abrupt end to her unexpected hobby.

“Collecting and identifying plants helped her hold on to sanity. It was therapeutic to her; she couldn’t have coped without it,” assesses Holger Politt, a Warsaw-based leading expert on Rosa Luxemburg. He’s mostly referring to her jail time, but not only that. Luxemburg’s passion for collecting, drying and pressing plants started in May 1913, when she moved to Steglitz’ Südende. It is here that she spent weeks on end exploring the flora of her neighbourhood’s meadows. In September 1915, she wrote to her dear friend Luise Kautsky: “In Südende the passion for plants took hold of me; I started collecting, pressing, botanising. For four months I literally didn’t do anything other than walk around in the field and arrange and identify at home what I brought back from my forays.” Luxemburg’s love for plants wasn’t new: as a girl, she’d wished to be a scientist, a botanist or a zoologist, and when she left her native Warsaw to study in Switzerland, her subject of choice was zoology. Of course, the call for a career in politics and her relationship with Leo Jogiches had her dropping her botanist’s potential in favour of economic science and activism. But it was a decision she occasionally lamented. “When her mother died in 1897 and she couldn’t go to Poland, she cursed the path she had taken and told Jogiches that all she had ever wanted to do was become a simple and honest scientist,” says Politt. Later, in November 1917, when she was doing time in Breslau, she wrote to Wilhelm Liebknecht: “A pity that life is too short and politics are forcing other duties on me, otherwise I would like to dedicate myself to this.”

Luxemburg renewed her early passion for botanism in the confined solitude of her prison cell. While incarcerated in three different jails between 1915 and 1918 – Berlin (1915-1916), Wronke (1916-1917) and Breslau (1917-1918) – her hobby became a life-sustaining exercise. “Each time she took her botanic books with her, and friends like Luise Kautsky and Mathilde Jacob would bring her flowers when they came to visit, or they’d send them in the mail,” asserts Politt. While serving her 14 months at the Berlin Women’s Prison in Friedrichshain for her anti-war speech (see page 15), she entrusted the latter with flower-picking on her behalf. In a letter from March 1915, she writes: “By now I have given you permission to pillage the meadows in my stead. In the forest there must be the light blue delicate anemone now, and the white daffodils…” As a political prisoner, she was only allowed outside the jail premises on particular occasions, such as visiting the doctor. As Politt notes, she would seize the opportunity: “On her way there and back she would pick up plants to bring back to her cell.” Her favourite flower was the snowdrop. In her letters to friends she expressed her deep longing to watch the snowdrops grow, as it meant spring was on the horizon. She had one in her herbarium, alongside hundreds and hundreds of other specimens pressed in her meticulously annotated notebooks. She did not only assign the plants both their German and Latin names, but also recorded when and where they were picked. “Now when you show the herbarium to botanists, they find lots of mistakes, but for an autodidact it still is an impressive assemblage,” Politt points out.

Little is known of what journey the herbarium took after Luxemburg’s death. It seems to have been taken to the US by relatives of her confidant Paul Levi, who emigrated there in the 1930s. It later found its way back to Warsaw, where it was rediscovered in the mid-1970s, and in 2009 the notebooks were compiled by the Polish branch of the Rosa-Luxemburg-Stiftung under the authority of Politt. In 2016, the Berlin-based Karl Dietz Verlag (the foundation’s publishing house) turned Luxemburg’s herbarium into a 400-page tome, the “Rosa Luxemburg: Herbarium” (2016), which includes selected letters and a preface by Politt, and certainly reveals an unexpected side of a decidedly versatile woman.