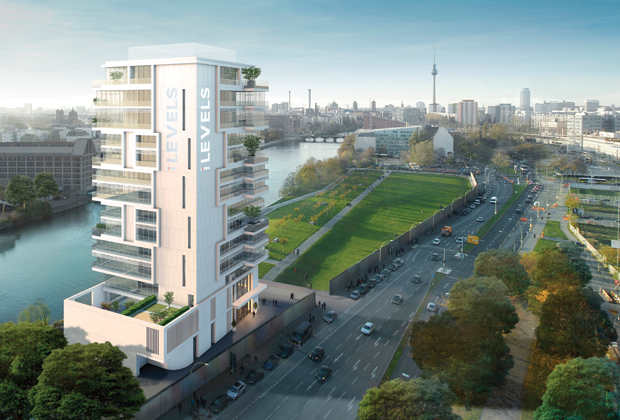 Dan Borden on the revolutionary Spreefeld housing project – and its evil twin across the river.

If you want a glimpse into Berlin’s future – or futures – take a cruise on one of those Spree River tourist boats. East of Jannowitzbrücke, you’ll sail past a pair of unfinished apartment projects: on your right, three freshly painted blocks known as Spreefeld; on your left, the concrete slabs of the Living Levels tower. They don’t look so different, but under the skin they represent visions of 21st-century Berlin that are lightyears apart.

By 2030, Berlin will need housing for another 250,000 inhabitants. The city government plans to build apartments aimed at low-income renters, but what about the growing number of Berliners, especially middle-class families, who want the security of owning their own flat? The city’s strategy: leave that market to private developers.

Guys like Maik-Uwe Henkel. His Living Levels complex (photo), aka the Death Strip Condo Tower, made world news last year when sections of the East Side Gallery were removed to make way for its construction. The luxury tower is wedged between the Spree and the last stretch of the Berlin Wall. Shortly after Henkel told the press he saw nothing wrong with building luxury flats where East Berliners died while escaping, Der Spiegel outed the millionaire as a former employee of the Stasi, East Germany’s secret police.

Living Levels is the ugliest example of an ugly trend: profit-driven opportunists filling Berlin’s empty lots with housing for wealthy non-Berliners. Real estate broker Nicholas Ziegert told Tagesspiegel that half his clients were wealthy Americans, Russians, Chinese and Luxembourgers buying a second (or third) ‘home’. They’ve pushed average prices above €3000 per square metre, out of reach for a typical Berlin family.

Five years ago, a group of Berliners banded together to build their own first-class apartments at a fraction of market prices. They bought a riverside lot and named their project Spreefeld in honour of its former tenant, the party bar Kiki Blofeld. The co-operative’s members shaped the project from the ground up. Spreefeld is more than an apartment complex, it’s a reflection of today’s Berlin:

Community After working together to make Spreefeld a reality, its 90 adults and 30 kids are a tightly knit, democratic community. Living Levels’ residents will curse the tourist mobs from their walled bastion of luxury; Spreefelders welcome all of Berlin to cross their grounds to a public Spree-side walkway. The street level will include public cafés and a kindergarten. They’ve even made friends with the prickly squatters of Köpi across the street.

Eco-friendly Both projects can claim energy efficient design, but that new hole in the East Side Gallery was created so Living Levels’ residents can drive luxury sedans into their underground garage. Spreefeld’s residents voted cars off their property. Instead of parking spaces, the buildings are surrounded by bike racks, playgrounds and community gardens.

Smart design Even unfinished, the Living Levels tower is already a 14-storey sore thumb blighting the Spree shore. Spreefeld’s blocks are half as tall, matching the old industrial buildings next door. Each of its 40 apartments was designed from scratch as a personalised home. They range from one-person studios to multifamily communal flats built around a shared living room/kitchen, reflecting the morphing nature of ‘family’ in the 21st century.

Costs Spreefeld’s customised flats were built using a standardised kit of parts to keep costs low. As a result, its members pay a refundable fee of €1000 per square metre to join the co-op, plus a nominal monthly rent. Compare that to Living Levels, where a two-bedroom flat, including the developer’s hefty profit, will set you back about €800,000, or €6500 per square metre.

Dr. Michael LaFond is a long-time campaigner for alternative housing and a proud Spreefeld resident. He wants the city to help interested Berliners organise Spreefeld-style co-ops and Baugruppen, or home ownership collectives. Stop selling city-owned land to developers and instead give these groups long-term leases and low-interest loans to get off the ground. Berlin can claim a century of revolutionary housing projects – Spreefeld is the next leap forward. It’s time to stop importing rich people and instead put more Berliners in their very own personal piece of the city.