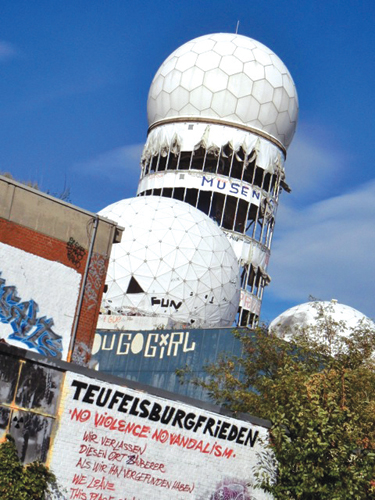 In August some Berliners threw one of those Facebook parties that got way out of hand. But this was no house party – it was located on top of a mountain, specifically Teufelsberg or “Devil’s Mountain”, a 115-metre-tall artificial hill in Grunewald. Even if you’ve never been up there, you probably know the domed towers of the former U.S. listening post.

Last year, a group called BerlinSightOut took control of the tattered spy complex hoping to save and restore it. They planned to fund their work by hosting tours, concerts and art events…until their little shindig on August 4 went viral. Thousands showed up. Chaos ensued. The city cracked down: no more gatherings larger than 10 people.

It was a disaster for BerlinSightOut, but they weren’t the first to have their Teufelsberg dreams crushed. One grand scheme after another has come to nichts. Blame bad karma or the Devil’s Mountain curse. After all, its cornerstone was laid by Adolf Hitler.

In 1937, the Führer kicked off construction of a massive Nazi military research center in Grunewald on what was then a flat plain. Fittingly, it was never finished. After World War II, the Allies chose the site for a Trümmerberg, a mountain of bombdestroyed building debris. Between 1950 and 1972, 26 million cubic metres of bricks, stone and plaster were dumped there, creating an artificial hill. Despite its dark origins, Teufelsberg sparked many fertile imaginations. What to do with Berlin’s brand new Berg?

America’s Ear: The U.S. National Security Agency (NSA) saw the city’s highest point as the ideal place to listen in on Soviet broadcasts. The first spy antenna went up in 1957. By the 1970s, it had grown into a 4.7-hectare nerve centre of Cold War intrigue. But the collapse of the Soviet Union sent the spies packing and made the complex a white elephant.

Sportsman’s Paradise: Just outside the spies’ fortress, Berliners were turning Teufelsberg into their own private Matterhorn. In the early 1960s, the western face was a full-fledged ski complex – with artificial snow cannons, a ski lift and 24-metre high ski jump – where Berlin hosted the 1986 World Cup in parallel slalom. But it’s all gone now. The three toboggan runs are overgrown with weeds, and the lift was ripped out when its electric motors interfered with Russian radio signals.

Devil’s Wine: In 1970 the city of Wiesbaden sent Berlin a gift of prize grapevines, and Teufelsberg became home to Wilmersdorf’s official vineyard. The first harvest yielded a sour brew dubbed Teufelströpfchen, or “Devil’s Drops”. It never caught on. The terraces of the vineyard are still visible on the southern slope, but the grapes have vanished.

Developer’s Dream: When the Americans handed over the former listening post in August 1992, it looked like a cash cow waiting to be milked. Proposals ranged from an astronomical observatory to a luxury hotel and spa. In 1996, Berlin auctioned the land to Cologne-based developers Gruhl & Partner for DM 5.2 million. Their plan: convert the spy complex into an elite compound of multi-million- Euro lofts with panoramic views of the city. A model duplex apartment was built. Units were sold. Construction started. But then the internet bubble burst, and the 2001 financial crisis put the project on hold. Then, the Wilmersdorf city council declared the site a protected forest and revoked Gruhl’s building permit.

Maharishi’s University: In 2007, film director David Lynch wandered through the abandoned spy buildings and decided he liked their vibe. A devotee of Transcendental Meditation, Lynch and his Maharishi Foundation proposed turning the site into a “peace university”. But after Lynch laid a symbolic cornerstone for the project’s centerpiece, a 12-storey “Tower of German Invincibility”, the project evaporated.

Today, Teufelsberg’s ex-spy complex is in a legal limbo: is it a forest or a historic landmark worthy of protection? After 20 years of neglect and vandalism, some say there’s little to save. Owner Hartmut Gruhl, the perpetual optimist, still dreams of building his luxury condos, along with a spy museum and restaurant. With his luck, why not throw in a casino? And the young folks at BerlinSightOut, who’ve leased the site, still hope they can open it for major events. In the meantime, they offer public tours – under the city’s watchful eye.