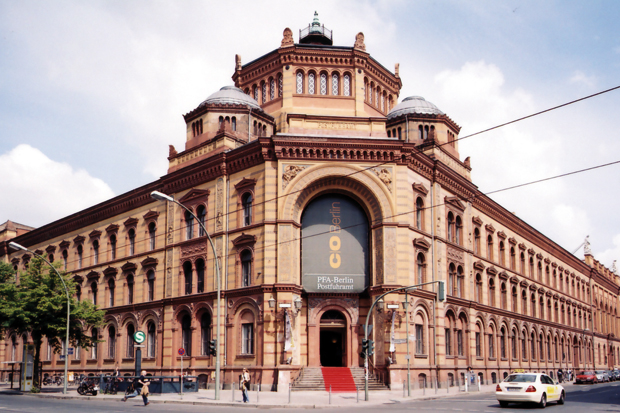 Berlin’s sizzling real estate market has brought a new lawlessness to town. Real estate speculators shoot it out in the streets while Sheriff Wowereit and his deputies bicker among themselves. Caught in the middle: we innocent townsfolk – and vulnerable arts institutions. Last fall, the popular photography venue C/O Gallery was thrown out of its home and into existential limbo. It’s a troubling tale – and one we’re likely to see played out again and again. The motley cast of players:

We know C/O Gallery as a world-class showplace for photography, but it started life as a tiny collective with big dreams. Back in 2000, Stephan Erfurt, Marc Naroska and Ingo Pott invented a new kind of gallery, a place where photography was presented in dialogue with architecture and design. Early successes made them hungry for something bigger.

No one knows what sort of twisted mutations the scientists have planned.

In 2006, C/O Gallery found a home that fit its grand ambitions: the Postfuhramt in Mitte (photo). This extravagant pile of brick and terra cotta was constructed in 1881 to house the Royal Post’s offices and stables, but it’s always aimed for something higher. Architect Carl Schwatlo capped his building with a cupola and two domes to echo the nearby New Synagogue. Bombed and burned in WWII, the Postfuhramt emerged from a major facelift in 1989 just in time to star in Mitte’s transformation into Berlin’s art mecca. Crowds thronged to the building for C/O’s blockbuster shows by photographers including Annie Leibovitz and Robert Mapplethorpe.

In 2005, Deutsche Post announced they’d sold the Postfuhramt to a mysterious investor of “international standing” who wished to remain anonymous. The shady new owner was an Israeli firm named Elad whose raison d’être is “aggressively targeting one-of-a-kind properties”, such as New York’s Plaza Hotel, then giving them an “ultra-luxury” makeover. But Elad’s plans to maximise the Postfuhramt’s profit potential ran into two obstacles: Berlin’s tricky landmark rules forbid proposed tweaks like sticking balconies on the façade. And, well, our city just wasn’t ultra-luxury enough. While they waited for Berlin’s rents to go sky-high, Elad leased the building to C/O.

Finally, last November, Elad got impatient and sold the Postfuhramt to a local but equally shady landlord. Biotronic is Neukölln’s one and only biotechnology firm. No one knows what sort of twisted mutations the scientists have planned for the Mitte landmark, but they’re clearly in a hurry – C/O Gallery was given two months to move out.

Ugly? Let’s start with the name: Stadtentwicklungsausschuss der Bezirksverordnetenversammlung, or BVV for short. This cabal of political appointees oversees Mitte’s development process. In 2010, C/O knew their post-Postfuhramt future was coming and asked the BVV for help. Mitte was eager to hold on to this cultural jewel and offered C/O a new home: some abandoned workshops in Monbijou Park, between Museum Island and Hackescher Markt. Ingo Potts, architect and C/O partner, designed a sculptural glass entrance pavilion. Exhibitions were planned for 2013 in the new space. Then, last November, the BVV reversed course. The Monbijou Park offer was made before Berlin’s 2011 election, and the newly appointed members declared the old panel’s agreement null and void. C/O Gallery and its 50 employees were suddenly homeless.

The C/O gang scrambled. They looked at other Mitte locations – Tacheles? – then a former brewery in Prenzlauer Berg.

The trail led C/O Gallery into Berlin’s Old West. Amerika Haus sits next to Zoo Station in Charlottenburg. It was designed by architect Bruno Grimmek as a beacon of 1950s American culture and good will, but instead became a target of protests during U.S.-led wars, from Vietnam to Iraq. When the Americans moved out and gave the building to Berlin in 2006, it was a musty artefact of the Cold War, a white elephant.