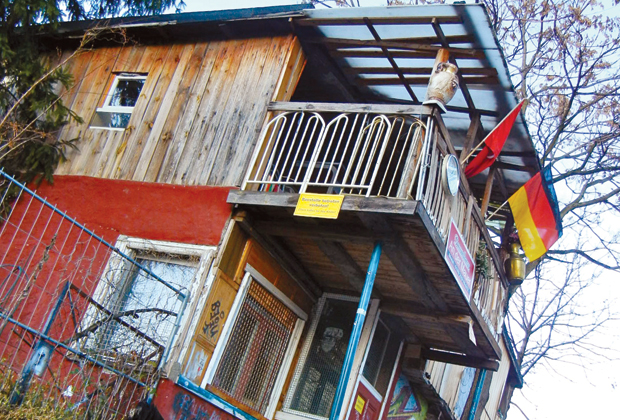 Common wisdom says the Berlin we love is a bubble about to burst. After two decades of rebuilding and modernizing, it’s only a matter of time before we can wave goodbye to its fragile mix of spaciousness, anarchic energy and affordability.

In addition to planning content for the Humboldt Forum (the soon-to-be-rebuilt Baroque palace), the 62-year-old Zurich native is organizing two major Berlin expositions, the IGA 2017 – International Garden Exhibition, in Tempelhof – and the ambitious, city-wide IBA (Internationale Bauausstellung or International Building Exhibition) slated for 2020.

City planners use IBAs to inject focus and innovation into the natural process of urban development. Berlin’s last IBA in 1987 was a nuts-and-bolts rethink of low-cost housing centered on Kreuzberg.

Hamburg is spending millions to reshape its Wilhelmsburg district for its IBA 2013. But Berlin is broke. The official IBA 2020 website touts big goals like sustainability, opportunity, vibrancy and beauty.

Heller’s dilemma: how do you have an IBA without big bucks? The answer – reinvent IBA. First, no megaprojects. This city’s had its fill of high-concept grand designs like Potsdamer Platz and Mediaspree.

Instead of asking what’s missing, this IBA will begin by asking what Berlin already has that we can build on. Heller uses the word Stadtkapital for Berlin’s non-financial assets that IBA 2020 will strengthen and protect from over-development.

For all it’s rough edges, Berlin is the once-and-future capital of reunited Germany. But outside the shiny, tourist-filled government zones, what does it mean to be the capital?

Heller admits this theme has inspired a lot of resistance. Why? The connection to nationalism? Or because Berlin is still divided between east and west, or into twelve villages? Does Euro-capital Berlin have to finally grow up, or better, can we inspire the rest of Germany to follow our quirky multikulti ways?

No one recommends carpet bombing as an urban planning tool, but World War II gave Berlin its distinctive surplus of open space. For decades these voids were seen as eyesores waiting to be filled, but as the number of empty lots dwindles, Berliners mourn the loss of air and light, wild nature and an ephemeral sense of future potential.

Heller points out that empty lots also forgive architectural sins by breaking up blocks of mediocre façades. This IBA will declare open space an asset worth saving. Better yet, could we vote for buildings that deserve to be replaced by empty lots?

One big downside to buildings is that they take so damn long to finish (what happened to that new airport?). This theme aims to rectify the problem by tapping into Berlin’s creative energy and spontaneity. Temporary buildings? Inflatable structures? Quaker pole barns?

Heller feels this theme “comes closer to a real quality of Berlin, this kind of scene.” There are precedents – the Berlin Wall sprang up in one day in 1961. A better model might be the house in Kreuzberg that Turkish immigrant Osman Kalin built from scrap materials back in 1989 (photo).

Caught in the no man’s land between (newly former) East and West, the house has been allowed to stand to this day. Is IBA 2020 shaping up to be too brainy and experimental to attract the designers, builders, land owners and that elusive cash needed to make it real?

Heller says no – it’s simple: “You look at a map and you find interesting problems and see if they can be solved using one of these three methodical approaches. Then, is there an investor or partner with the money?” If not, move on to the next project.

He admits IBA 2020 may leave few tour-friendly monuments, but that’s not the point. He compares it to the mammoth exhibit of architectural models he curated in 2010. “Like Realstadt, it’s much too much. And a city is much too much. This IBA should take the risk to deliver itself to this ‘much too much’.”

The last IBA inspired a young generation of city planners and turned them in a new direction. IBA 2020 aspires to turn the whole city into an urban planning laboratory and invites all Berliners to join in, think big and reinvent the city.