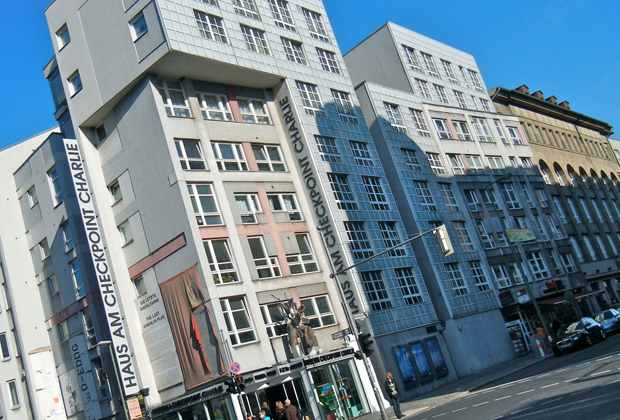 After World War II Berlin became an architectural battleground, with socialist East and capitalist West competing to rebuild the war-torn city. The Stalin-era workers’ housing at Karl-Marx-Allee was countered by the sleekly modernist Hansaviertel in Tiergarten.

The 1960s space-age TV Tower glared over the Wall at Europa Center’s rotating Mercedes medallion. But the boldest and most farsighted building project of the era was the International Bauausstellung (International Building Exhibition) – or IBA – finished in West Berlin in 1987.

Planners made an abrupt about-face: instead of tearing down and replacing the old city, they started to repair and revitalize it. IBA 1987 was built on a series of city planning failures.

The first: the 1970s attempt to turn West Berlin into a car paradise with a network of new highways. One multi-lane roadway was planned to plow through Kreuzberg – low-income apartment towers on both sides would serve as sound barriers.

Families were evicted, old buildings demolished and the first towers went up at Kottbusser Tor. But they’d picked the wrong neighborhood to mess with. Kreuzberg SO36 was already a hotbed of angry leftist youth.

Now evicted families and shop owners were equally pissed. The whole neighborhood rose up and killed the project. This led to a second failure. The buildings that had been emptied to make way for the abandoned highway still stood vacant.

Artists and other activists broke in, took control and made them livable. Berlin’s squatter movement was born. The city government was overwhelmed by the scale of the insurrection and threw up its hands.

But the biggest failure was the whole system of post-war urban planning. Designers realized that replacing small-scale city fabric with forests of apartment towers was killing Europe’s cities.

In 1979, Berlin’s city planners launched IBA, with the ambitious goal of solving all these problems. The focus was housing. There were two parts: IBA Neubau would fill empty lots with new buildings by an international team of architects; IBA Altbau would fix up the neglected pre-war buildings in between.

Bombed-out neighborhoods would be made whole again. One key concept developed by German architect Josef Paul Kleihues for IBA 1987 was “Critical Reconstruction” – basically, new buildings would fit in with the old.

This was a radical notion at the time – the East Berliners had plans to flatten Mitte and replace it with even more Plattenbau apartment blocks. IBA 1987 tapped into the DIY energy of the squatter movement by fixing old buildings, then handing them over to their residents.

Here, the brick façade is broken up by spiky glass stairwells and a giant concrete column marking the corner. Kreuzberg Tower John Hejduk was a New York academic who left behind few built projects.

Two are in Berlin. In 2009, a developer started remodeling this poetic gray housing complex near Checkpoint Charlie, and the uproar led to a campaign to protect all of IBA 1987’s landmarks.

The spirit of IBA 1987 lives on, as planners apply Critical Reconstruction to rebuild the former East Berlin – Hackescher Markt is a prominent success story.

But IBA’s government-subsidized housing only had rent protection for 20 years, so the apartments are now market-rate. And nearly 25 years later, Berlin is still paying off the IBA construction costs.

Is Berlin ready for a new IBA? Planners are laying the groundwork for IBA 2020 – more next month.