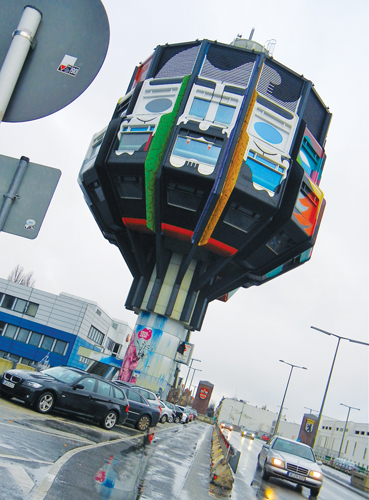 Schloßstraße in Steglitz wants to update its dowdy image, and business leaders have hit on a surprising theme: science! The symbolic centerpiece of the campaign is a 1970s landmark tower known as the Bierpinsel (photo), which got an extreme makeover by four street artists in summer 2010.

Appropriately, the Bierpinsel itself is a proud-but-faded relic of an earlier rush to embrace the wonders of technology.

Back in the 1960s, while most young radicals rejected US-inspired car culture and mechanization, architects seized on technology as the salvation for cities and their social ills.

British designers Archigram proposed sci-fi-inspired walking cities. Buckminster Fuller called for a giant dome over Manhattan. A spurt of German federal construction funds into Berlin gave home-grown architects a chance to create their own Tranformers-style structures, utopian machines-for-living best viewed from a car whizzing past at 120km per hour.

In 1967, Berlin’s U-Bahn network was expanding south into Steglitz, and the job of designing the Schloßstraße station went to the husband-wife team of Ralf Schüler and Ursulina Schüler-Witte.

Not content working underground, the architects fell in love with the new A-104 highway crossing overhead. They proposed uniting subway, street, sidewalk and speedway into one multi-armed transit hub, a 76-metre-tall landmark with pop art graphics, in-house restaurants and a bright red tower as its crowning glory.

When the city balked at the cost, the intrepid designers convinced a developer to realize their scheme. The Schülers based their design on a tree, but others likened it to a lollipop or a brush.

In October 1976, the newly dubbed Bierpinsel, or ‘Beer Brush’, opened its doors. The lack of local eateries meant its three floors of restaurants were packed, but then sleepy Schloßstraße grew into Berlin’s busiest commercial street next to Ku’damm, and the Bierpinsel had lots of competition.

A string of Bierpinsel cafes, bars and even discos came and went. Its red panels faded to dusty pink. In 2002, its doors shut for good.

Jump to 2010 when young businesswoman Larissa Laternser vowed to kick-start Schloßstraße by reviving the Bierpinsel. But when the artists began spray-painting the tower, the Schülers cried foul – their baby was being defaced!

Laternser, whose family owns the tower, convinced the aging architects that the makeover brought their design into the 21st century. Won over, they attended the opening ceremony in April 2010.

But plans for a high-end eatery in the tower were put on hold by a burst water pipe on the top floor. Laternser hopes the Bierpinsel will be repaired and reopened by the end of 2012.

The Schülers’ little red tower led to a much bigger project, a new International Congress Center to expand the Nazi-era convention center and Funkturm.

The ICC’s 80 meeting rooms and auditoriums could be arranged in so many variations, the building was dubbed the “International Congress Chameleon”.

In a 1979 promotional film, Ralph Schüler demonstrates how those external stair towers double as structural columns and touts his innovative use of high-tech materials like neoprene and asbestos-laced cement panels.

The latter proved a ticking time bomb. As attendance numbers have dropped (300,000 in 2005, 162,000 in 2011), the ICC has gained a lot of enemies. It’s outdated, critics say, and badly designed: only about 10 percent of the floor area is actually meeting spaces, the rest overly generous lobbies, stairs and hallways.

And what about that asbestos? In May 2008, the Berlin government voted on a motion to tear down the ICC and start anew. Wiser heads prevailed. In 2014, the ICC will close, but only for a two-year, multi-million-euro rehab.

Sadly, Ralph Schüler passed away last March, but his buildings live on. Coming up: a look at a prominent example of one of Berlin’s 1970s high-tech monuments that wasn’t so lucky.

Architect and historian Sven Eggers has made a mission of exploring and publicizing Berlin’s little-known architectural gems. To join his tours, check out his website: buero-schwimmer.de.