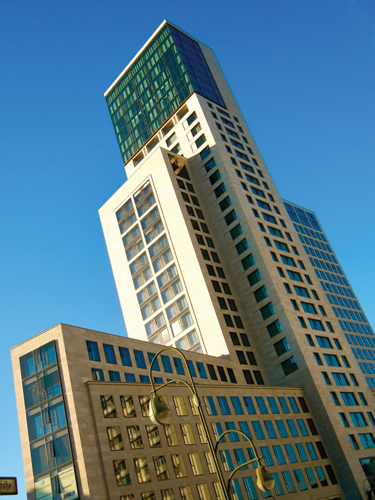 “They’re back.” My friend the city planner gives me a wry smile. He means the big players, world-class real estate investors. After Berlin’s 1990s bubble burst, they headed for greener pastures. Why return now?

Blame the Greeks. The euro crisis drama has cast Germany as a pillar of economic strength. Real estate is high-stakes poker. Big rollers like China and Russia are played out. The go-go Spaniards and Brits are on the floor. It’s time to bet on the sober designated driver.

Nothing highlights Berlin’s real estate turnaround better than the forest of new towers popping up across the city.

The highest-profile newcomer is that travertine slab across from Zoo Station. Designed by Frankfurt architect Christoph Mackler, it’s a sleek jumble of geometric forms topped by a square glass screen that provides its name, the  ZooFenster, or Zoo Window.  Inside are 32 floors of offices,  apartments and a 242-room  Waldorf Astoria hotel.

Like those monster buildings, the big developers are here to stay

Controversially, ZooFenster  replaced half of a 1960s landmark, the Schimmelpfeng Haus. The  other half, across Kantstrasse, was  just demolished to make way for  another tower, Upper West, designed by Berlin’s own Christoph Langhof. Like the ZooFenster, it will rise 118 metres, dwarfing the once-sacred Kaiser Wilhelm Memorial Church. Unlike its stately stone neighbor, it will be 33 floors of curvy glass, a jarring stylistic mismatch akin to Potsdamer Platz’s three stooges.

During the Cold War, Europa Center’s giant spinning Mercedes emblem was THE symbol of West Germany’s booming economy and a kind of anti-Communist talisman. When a second sprouted on the 1990s Daimler tower at Potsdamer Platz, it declared capitalism triumphant. This year, a third will rise on top of a glass office block next to O2 World (and East Side Gallery’s Berlin Wall), but this time it’s an emblem of retreat.

Daimler, still smarting from their disastrous Chrysler partnership, had to sell off their Potsdamer Platz block and move to cheaper digs. Now the Mercedes hood ornament looks more like a pouty swipe at their hostile Friedrichshain-Kreuzberg neighbours.

The new Daimler building will be a lonely outpost of corporate chutzpah, but not for long. Soon the O2 parking lot will welcome three more office buildings, plus a major shopping mall across from the Warschauer Straße station.

Another lonely skyscraper waits for its playmates near Hauptbahnhof. Last October the French petroleum giant Total moved into their 69-metre-tall headquarters designed by Regine Leibinger and Frank Barkow. Despite some subtle quirks – a kink in its floor plan and timid waves in the façade – the white concrete tower radiates corporate conformity.

The Total tower sits in a muddy tract of land north of the train station that Berlin’s government has grandly named Europa City. Over the next 15-20 years, they hope to add office buildings, hotels and 1200 apartments, inventing a new city center to rival Potsdamer Platz and Friedrichstraße.

A Texas-sized slab at Alex

Houston-based developer Gerald Hines owns skyscrapers around the globe, but his only Berlin erection is that stubby Saturn on Alexanderplatz. That will change when his 150-metre-tall tower rises next door. Planned as an office block, it’s being redesigned to house 400 apartments.

Hines’ high-rise will balance out the Park Inn hotel, but the city’s zoning plan calls for another six to eight buildings the same size towering over Alexanderplatz.

Condo spires on the Spree

Back in 2008, Berliners voted to kill the development project known as Media Spree. Demand Number One: no more skyscrapers!

Still, the city just approved a developer’s plan to add two condo towers and a hotel between Arena and the Allianz tower. Designed by Berlin’s Pysall Architects, the towers will at least satisfy Demand Number Two: public access to the Spree River’s banks.

Neukölln’s Estrel Hotel is best known for its Stars in Concert extravaganzas starring Elvis and Cher impersonators. Their latest spectacle is a tower to mark the intersection of Sonnenallee and the soon-to-be-built A100 highway extension. If Estrel’s plans are realised, the hotel will be the tallest building in Berlin.

The new crop of towers proves Berlin is once again a magnet for world-class developers. And like those monster buildings, they’re here to stay.