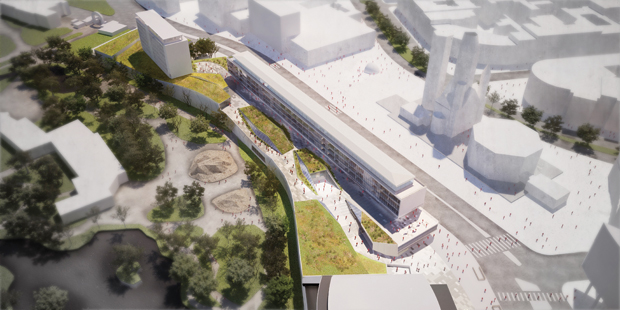 Dan Borden on how the West is reclaiming its Times Square status.

Back in 2000, planners unveiled a scheme to turn Alexanderplatz into Berlin’s mega-downtown with the addition of 10 Manhattan-style skyscrapers. News that the first tower – a 150-metre stack of twisting limestone blocks by architect Frank Gehry – will finally go up next year is proof that Berlin is slowly waking from its economic coma.

The tower’s owner is Hines, a Houston-based real estate developer who’s betting big on Berlin. The next hot spot on Hines’ radar: City West. They’ve quietly bought three adjoining buildings, creating a super block across the street from Zoo Station with plans to… well, no one knows. Hotel? Apartments? Current rules say a new building can’t go higher than 21 metres, but Hines will likely lobby hard to build another skyscraper like its neighbours.

The 118-metre high Zoofenster, home to the new Waldorf Astoria, opened across the street last year; its equally tall neighbour, dubbed Upper West, will open in 2016. The German government hired architect Jan Kleihues to design a collection of towers on federal land behind the station. Is the Zoo Kiez, not Alexanderplatz, morphing into that 21st-century mega-downtown Berlin’s planners dreamed of?

From the 1950s through the 1980s, the area around Zoo Station was West Berlin’s Times Square. Passengers stepped off their trains into a seedy blend of sex shops, neon-lit Kinos and low-rent hotels. But when Berlin reunited, all eyes turned eastward. Potsdamer Platz and Alexanderplatz stole Zoo Station’s crown. The final insult came in 2006 when Deutsche Bahn trains began bypassing Bahnhof Zoo altogether.

If built, Hines’ development will wipe away the last remnants of Cold War Bahnhof Zoo, the AO Hostel and the Beate Uhse Erotik Museum. What’s fuelling this rebirth? Globalisation and tourism. Ku’damm is now a string of multinational clothing stores. The Zoofenster, with its €12,000 per night Presidential Suite, belongs to a Dubai-based developer. Upper West will contain the world’s largest Motel One, with 600 rooms.

The sentimental centrepiece of the Zoo Kiez revival is a throwback to its earlier rebirth, after World War II. The Bikinihaus is a long, skinny six-storey office block built in 1957 to fill a bombed-out gap between the Zoo and Breitscheidplatz. Architects Paul Schwebes and Hans Schoszberger gave the minimalist glass building a distinctive feature, an open second storey that divided it horizontally into two pieces – like a bikini. A bomb-damaged cinema to the west of the building was rebuilt as the ultra-swanky Zoo Palast, for decades the home of the Berlinale film festival.

Mayor Wowereit compared the Bikinihaus to Sleeping Beauty. Her slumber, he promised, was over.

In post-Wall Berlin, these symbols of West Berlin’s economic miracle became white elephants. The Bikinihaus sat empty and neglected. The Berlinale moved to the snazzy new Potsdamer Platz in 2000, and the ageing Zoo Palast was slated for demolition.

In 2002 investors bought the complex and promised to return the buildings to their original splendour. When construction began in 2010, Mayor Wowereit compared the Bikinihaus to Sleeping Beauty. Her slumber, he promised, was over.

The wake-up call was an adrenaline heartjab of high-end stores, restaurants and a 149-room designer hotel. Belgian artist Arne Quinze and his architecture firm SAQ have expanded Bikinihaus’s lower two floors into a shopping mall. They promise a non-traditional retail mix of Berlin-based clothing labels and global brands. Despite cost overruns and construction delays, the Bikinihaus, now renamed Bikini Berlin, will reopen April 3.

The Zoo Palast cinema has already emerged from its €4.5 million facelift as a seven-theatre luxury multiplex. Hans-Joachim Flebbe, owner of the nearby Astor Film Lounge, added reclining armchairs for 1650 Sekt-swilling filmgoers and a synchronised music-and-water show in the main auditorium.

Will the new Zoo Palast fill its spacious seats? Will the Ku’damm crowds cross Breitscheidplatz for the Bikini Berlin shopping experience? Is the Zoo Kiez about to boom? A lot of powerful eyes are watching: developer Hines and the German government, but also the owners of that land behind Bahnhof Zoo once slated to house a giant Ferris wheel.

At least the 70-year-old Bahnhof Zoo is finally getting some respect in the form of a two year, top-to-bottom renovation. And starting this May – for the first time in almost eight years – Deutsche Bahn trains will again make daily stops at the station.