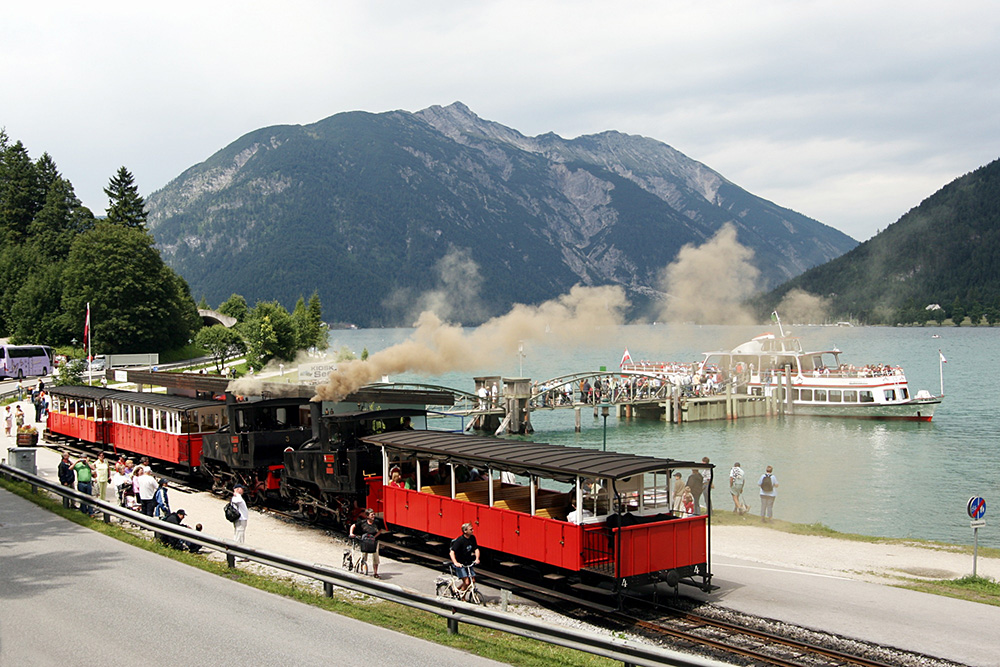 You eat only vegan food, bike everywhere and refuse to buy plastic bottles – so why are you still flying low-cost airlines all around Europe? Sandra Sarala tells us why the EasyJetset should choo-choo-choose more sustainable transportation.

Several mornings per week, my travel-lust gets multiple teases from airlines in email form: a “Last chance to earn miles easily”, another invitation to “Book a flight now for autumn 2018”. I sip my organic fair trade coffee and glower back at the computer screen glowing with renewables-powered electricity, reflecting on glyphosate’s license renewal, Dieselgate, Anthropocene extinction, and the starving polar bears who prove that allowing a two-degree temperature rise is already 1.5 degrees too many.

The 21st century is stressful, dammit! I practice permaculture, 95 percent of the food in my cupboards is vegan and winter is long and hard. Surely I deserve a trip in the sun… but not like this. Deleting the shameful evidence of frequent flyer history from my inbox, I resolve to take the train instead.

It’s never been easier or cheaper to take to the skies than it is right now. Discount giants like Ryanair and EasyJet keep on opening new hubs across Europe; the latter just took over AirBerlin’s routes between Berlin, Frankfurt, Munich and Stuttgart. New players like Air France subsidiary Joon and Iceland’s Wow Air keep sprouting up. It’s no wonder the number of passengers flying out of Berlin has nearly doubled in the past 10 years, from 16,846,469 January-October 2007 to 28,902,991 for the same period in 2017.

All those discounters are buoyed by the 1992 liberalisation of the airline system. This allowed airlines to drop prices via complex pricing structures which fluctuate with demand; use small airports with lower landing fees; and offer lower levels of service and worse employee conditions. What’s more: until very recently, planes weren’t paying enough fuel tax. With lofty WWII end-game ideals of creating world peace and friendship, 1944’s “Chicago” Convention on International Civil Aviation gave massive tax breaks to airlines. It was only in 2012 that the European Union’s ‘cap and trade’ carbon emissions trading system (ETS) enabled fuel taxation, and then only for airlines within the European Economic Area (the EU plus Norway, Iceland, and Liechtenstein).

Take Easyjet’s new flight to Munich and you, passenger, are responsible for emitting 39.7 kilos of Carbon dioxide.

But cheap flights come at a high cost to the environment. According to the International Civil Aviation Organization (ICAO), aviation is currently responsible for 2.1 percent of global CO2 emissions. Take EasyJet’s new flight to Munich at 78.62g/km and you, passenger, are responsible for emitting 39.7 kilos of carbon dioxide (see chart). On Deutsche Bahn’s speedy new ICE route to the same city, your figure would be around 4.6 kilos.

And the good news is that according to Christoph Lerche, Deutsche Bahn’s European Head of Transport Policy, “All long-distance journeys on ICE, IC and EC trains will operate 100 percent with renewable energy as of the beginning of 2018.” DB’s renewable sources are mainly hydro and wind energy, mostly from external suppliers, often in long-term contracts. The company’s total renewable energy proportion for long-, middle- and short-distance trains stood at 42 percent in 2016, targeting 70 percent by 2030 and aiming for CO2-free by 2050 at the latest. Already ahead of earlier-set targets, they claim to be “leading the energy transition in the transport sector”. “Rail doesn’t emit that much, especially with electric, which has no emissions except from where they buy the power from,” confirms economist Gian Carlo Scarsi, a former Head of Regulatory Economics who ran comparative efficiency benchmark analyses for the UK’s Network Rail. “But airlines have a huge advantage as opposed to rail. The sky is ‘free’, they’re not paying enough for the pollution generated, they have no infrastructure charges such as for rail and other vehicles. Lerche can only agree. “It’s more challenging for rail to off er better fares than other modes of transport. And those inequal conditions also include ‘regular’ taxes. Whereas international flights are exempted from value-added tax, the full tax applies to long-distance rail journeys.” The surcharges paid by Deutsche Bahn according to Germany’s Renewable Energy Sources Act were over €150 million in 2017, four times more than 2012. “Rail is burdened by energy taxes and the emission trading scheme.”

Of course, it’s not just planes that railroads have to compete with these days – it’s cars and buses, as well. Flixbus might take twice as long to get you to Munich as Deutsche Bahn, but it’ll get you there for less than a third of the price. But here, too, the earth is paying: according to the most recent EEA figures, CO2 emissions for road passengers are nearly four times those of rails.

All railway companies pay distance-based charges in the EU. Not so for road vehicles. The Brussels-based Community of European Railway and Infrastructure Companies (the CER, comprising 76 Europe-associated rail bodies), lobbies for fairer competitive conditions for rail. CER and European Commission figures show tolls and time-based charges are currently only applied to trucks on 20-25 percent of Europe’s network, even less for passenger transport. To even the playing field, the CER proposes legislative changes such as mandatory distance-based charges on all major roads, changes they say would benefit citizens and the environment.

We certainly see politicians dragging their heels. Consider the Merkel government’s failure to address Dieselgate or limit diesel vehicle use in cities. Given the burgeoning budget airline industry’s continuing “success” at pushing a false economy, and the airline lobby’s power, the ICAO’s October 2016 agreement to set airlines’ carbon emissions in the year 2020 as the upper limit of what carriers are allowed to discharge may prove a pipe-dream. Given the slow-motion machinations of crony democracy, if we want to save our under-stress world, we must play our part.

For Berlin’s “poor but sexy” creative set – me included – rail might appear pricey. Nevertheless, when planning a “performance and permaculture” tour of Italy, France and Amsterdam last September, the train was my first and only option. Declaring my interest, I was privileged to receive a journalist Interrail pass for that month on the tracks. But even at my own expense, when I had to take another work trip in November, trains were again the choice.

One month ahead I booked Berlin-Marseilles return, without discount card, for €150: perhaps a tad more than cut-price airlines, but not that much more. I took four free pieces of luggage, enjoyed legroom, used onboard power and near-continuous wi-fi to work. For that 2400km highspeed TGV and ICE return trip, my passenger CO2 emissions were 36.8 kg (SNCF, France’s national state-owned rail company, prints emissions on travellers’ tickets). For the same trip by plane, EasyJet calculates 194.5 kg. No argument. The evidence I’ve seen across Europe is that trains are usually pretty full; I’m definitely not alone in my choice. Deutsche Bahn spokesperson said travellers increased from 131.9 million to 138.4 million between 2015 and 2016. At the end of 2017 they were already seeing a 10 percent rise in bookings for a few months ahead. Jumping on the bandwagon, so to speak, is a rising trend. And people booking ahead secure the best Sparpreis fares.

For passengers loaded with luggage – like musicians – trains are often the best option compared to Flixbus (which charges for guitars) and Ryanair (which makes passengers check or buy an extra ticket for large instruments). Local performer Karla Hajman, aka Stereochemistry, says, “Trains are my main means of transport. I tried touring by car one year, never again!” She has a BahnCard 25, a card that gives travellers a 25 percent discount on all trips for €62/year, as well as Trenitalia’s CartaFRECCIA for her trips to Italy. “It’s dirt cheap compared to Germany, and you get larger discounts for longer rides.”

Agreed overall train positives: comfort, speed, price, reading, relaxation, the rocking motion, looking out big windows. Singer and comedian Tim Whelan, here seven years and a self-confessed “massive train nerd”, holds a BahnCard 50 (50 percent off regular fares and 25 percent off Sparpreise for €515/year, first class and €255/year second class) and puts his estimated savings in the thousands of euros. “The 50 is especially great for short-term/last-minute plans, while the 25 is ideal for long-term planning.” Whelan hates “airports – horrible places – you’re sat there like freight, it’s about the necessity of getting there. With trains, the pleasure of the trip is part of the experience. And for work trips, it’s all tax-deductible!” Not to mention that for families with children under 15, who travel on the train for free when accompanied by a parent or grandparent, the savings can be astronomical.

Sadly, savings or no savings, when it comes to visiting my family in the Antipodes, trains just aren’t an option. To off set my carbon footprint, I’ve planted countless trees in multiple countries. But that seems hypocritical for a Berlin-dwelling New Zealander with an elderly mother. Environmentalist George Monbiot recently wrote that he limited flying to once every three years. By example, he punctured the cabin of my well-meaning tree-planting. That flight fuel oil is always better left in the ground, plus there’s no guarantee those trees will reach maturity. I’ll keep planting, but future escapes from Berlin will be by train, flights limited to familial “love-miles” only. Naturally, I’m also investigating how to do that trip sustainably overland, because I’d like us all to live out our lives in a bio-diverse world that doesn’t resemble Blade Runner 2049’s lifeless dust-bowl. And because basically, the cheapest thing about günstige Angebote is that flying sells us all short, while rail travel keeps us on track for a future.