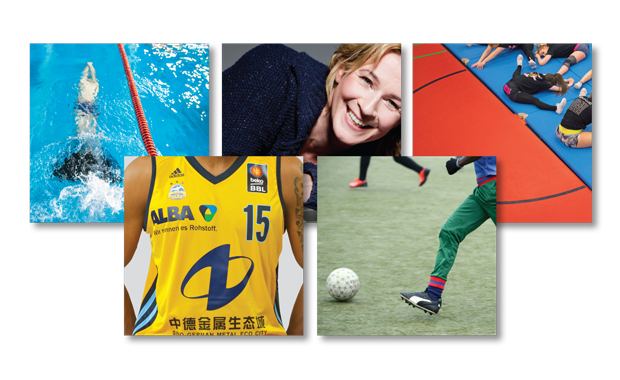 Why the real heart and soul of Berlin resides not in galleries, clubs or start-up boardrooms, but on the playing field.

The sporting life can take strange directions in Berlin, and few places illustrate that more than the statue of Friedrich Ludwig Jahn atop his raised platform, glowering north over the entrance to the Hasenheide park in Neukölln. The good old “Father Of Gymnastics” is getting a little dirty now, the hundred or so plaques cemented into the base naming the clubs who paid for the erection of the statue are growing illegible with moss and graffiti; only a few metres away, the bushes are filled with not-terribly-sporty-looking guys peddling dry and seed-ridden dope. But it was right there in Hasenheide that Jahn first organised sport for the masses in Berlin. He cleared the trees and set up some rudimentary equipment for Turnen, mass gymnastics. He was an unlikely pioneer, a reactionary believing in the innate right of Prussia’s military standing, but who absolutely refused to countenance the idea that social position or wealth should determine participation in sports, as long as the exercise itself was taken seriously enough.

His activities in Hasenheide used to draw huge crowds of onlookers that he utterly disdained due to their slovenly nature and constant diet of cakes and sweets. He called them the “pastry eaters”, in direct contrast to the gymnasts. Jahn hated the pastry eaters.

His quasi-socialist attitude to sport proved too dodgy for the Kaiser, who would banish him into exile, but Jahn had already begun the long process by which Germany would become an all-conquering sporting power over the next 200 years. That Exberliner is now able to publish an issue dedicated to the sportsmen and women of the Hauptstadt is directly due to this squat and bearded, strangely ugly man’s vision.

Today, there might be too many dope dealers tempting us into Hasenheide bushes, too many artists and bohemians, for sport to be considered a cultural touchstone in Berlin. But this would be to ignore the countless hundreds of thousands for whom it is an integral part of life.

Everything clashes together here; it makes absolute sense that after winning three gold medals at the World Athletics Championships in 2009, Usain Bolt spent the night DJing at Yaam. It is perfect that the players of 1.FC Union take to the pitch to the screaming tones of Nina Hagen, as it is that the most hungover wastrels have the right to race alongside the greatest of all time in the fastest marathon on Earth, or that the city’s most beloved sport requires only a cheap paddle, some nice weather and maybe a beer to participate.

And though the times since Hertha BSC won a league title, for instance, are ever further back in the murkiness of history, there are thousands more success stories in this city. The Eisbären have won five of the last seven ice hockey Bundesliga titles, Alba Berlin won seven German basketball titles in a row around the start of the millennium and the Füchse are now competing regularly in European handball. Berlin’s history as an immigrant city is writ large in its current colossi; the Cottbus-born Robert Harting or the Albanian-born Arthur Abraham, for instance, are proud examples of how the city is at its finest when it opens its arms to the whole world and allows people to achieve their highest potential (including women and disadvantaged minorities). This is part of a movement from the very grassroots of sport up. Berlin becomes ever closer entwined with its people when they play and watch any sport together.

Because sport is important.

Upon conceiving this special issue the questions raised were many. Where should the focus be? Obviously the looming shadow of an Olympic bid for 2024 is dividing the city almost exactly in two. Can cash-strapped Berlin really devote the billions necessary to host the world’s athletes, press, functionaries and lookerson in a gaudy blow-out, or, on the contrary, should the city take the Olympics as a unique opportunity to catch up with overdue urban investments and finally live up to the Weltstadt status it dreamt for itself? The athletes we have spoken to for this issue are totally in support of the bid. They want to showcase their home, the place where they became some of the best boxers or tennis players or speed skaters or footballers or whatever in the world.

With this issue we celebrate the stars as much as the amateurs, whether swimming like mermaids, building human pyramids or even playing Quidditch, or just watching – their heart beating for their favourite teams and players, in unison with hundreds or thousands of others – all coming together as one. Because sport is the greatest of levellers. Friedrich Ludwig Jahn knew that all those years ago, and though he would look at those dealers in the bushes in Hasenheide now and see the natural descendants of the pastry eaters, he would also see the movement he began reaching its natural fruition. In today’s Berlin, sport matters. And celebrated or unsung, this city’s coolest heroes are not its artists or start-up geniuses – they’re its athletes.