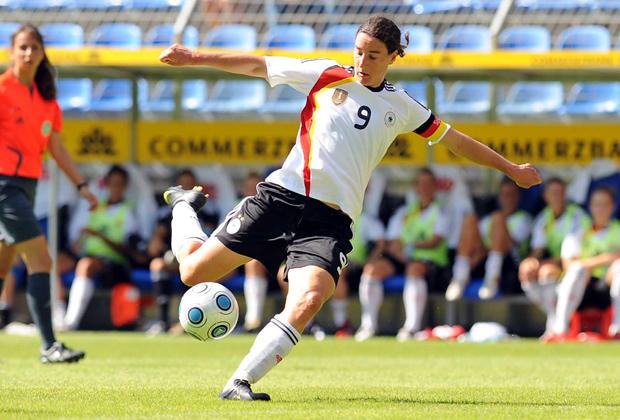 The only woman to coach a professional men’s team in Europe, Carolina Morace took charge of Italian third-division side Viterbese in 1999 but left after two games, stating that the media pressure was too much. These days however, women are breaking ground.

In the UK there are over 800 registered female referees, although slurs abound, such as the one that got SKY TV‘s Andy Gray and Richard Keys sacked when they wondered if “she understood the offside rule”.

In Germany, Bibiana Steinhaus has been refereeing in the 2. Bundesliga and hopes to step up to the top division next year. It is a sign of her excellent and consistent performances that she has been noticed more for getting her breasts brushed by Hertha player Peter Niemeyer than for any high-profile mistakes.

Tiger Woods earned $105 million in 2010. David Beckham received around $40 million. By contrast, Brazil’s Marta Vieira da Silva, the women’s World Player of the Year, received about a tenth of that. Even that fraction makes her career the lucrative exception to the rule, and most of that income comes from her sponsorship from Nike, the same company who helped the tennis player Maria Sharapova earn over $22 million in a single year. Needless to say, Sharapova is blonde and beautiful.

The average player’s salary in the English men’s Premier League is an eye-watering £33,000 per week. Meanwhile, the recently inaugurated FA Women’s Super League has a salary cap that states no more than four players per team can earn more than £20,000 per year. For most of the clubs, even this is impossible, and at the top clubs, the best players – such as Arsenal‘s defender Faye White – have to work full time within the club to achieve even this.

FIFA head honcho Sepp Blatter famously said that if they wanted to be noticed, women in football should wear “tighter shorts and low-cut tops”. The quote was revealing in many ways about the level of respect that women get in the game, but many do want to move away from the image of female footballers being butch and unglamorous.

The Dutch amateur side had to make a Cruyff Turn (a trick of evasion made famous by Dutch footballer Johan Cruyff) around FIFA’s rulebook by wearing shorts underneath when they decided they wanted to play in skirts.

“We find this more feminine,” said one of the FC De Rakt players, adding that the garb “will improve the image of women’s football”. In an age when David Beckham is lauded for his attempts to make the game less macho, a lot of women struggle to do the same. Former model Adriana Karembeu has been recruited as an ambassador for the World Cup to address this, but the question remains whether players would rather be taken seriously on the pitch or off it?