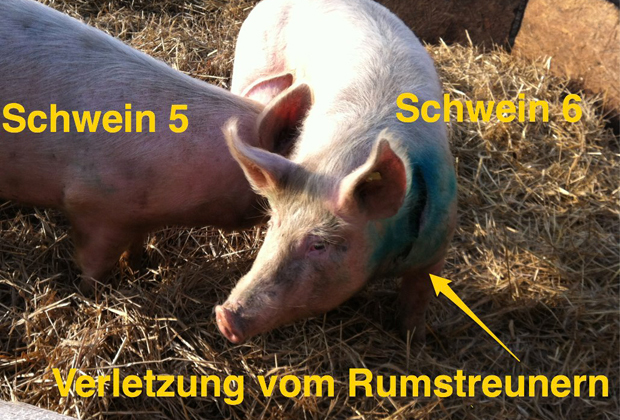 A few vexing and perplexing things to start your week in Berlin:

Over the past week the media have been fascinated by Meine Kleine Farm, a service run by Berliner Dennis Buchmann that allows you to monitor the life of the pig that will later become your sausage through photos, status updates (“Pig 6 injured – slaughter earlier than planned“) and finally, a photo of the happy porker on the package when it arrives at your doorstep. In other words, a porcine, feel-good version of Big Brother. The pigs live outdoors on a small family farm, giving it a cutesy, twee feel. Online reactions range from “pussy-ass city dwellers who can’t face up to the reality of meat” to “vegan propaganda”. My reaction to both lines of thought: the true reality of all meat isn’t a small farm with pigs frolicking in mud, but horrific meat factories of “faceless” victims. Maybe a webcam in one of these would have a greater impact.

In the spirit of “anniversary journalism”, Der Tagesspiegel has checked up on “Ray” the “Forest Boy” – the English-speaking 17-year-old who showed up on the steps of Berlin City Hall six months ago, claiming he had been living in the woods with his father for years. Interpol has failed to identify the boy or reach any relatives. Hence Ray has no passport, no citizenship and continues to live in a home somewhere in Tempelhof. Especially odious are the comments beneath the Tagesspiegel article accusing the boy of being a fake, of being a fugitive running away from a crime, and of sponging off of the German taxpayer.

My German word for the week: geshitstormt. Speaking at a conference on gender issues organised by the Green Party over the weekend, Pirate Party activist Julia Schramm said the pirates “had more tolerance for sex with ponies than for feminism.” She went on to say how she had “geshitstormt” parliamentary head Andreas Baum after he said women within the Pirate Party preferred to work “in the background”. Shitstormen is the beautiful linguistic creation of German hacktivists and means to fully trash your opponent, whether an evil corporation or loser politician, in social networks and blogs. Remember, if there’s just one thing you do this week, try to fit geshitstormt into a sentence.