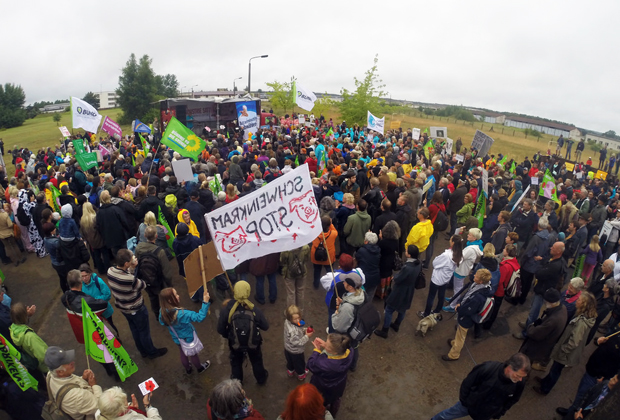 At Cafe Endlos in Prenzlauer Berg, they have a deal called SchnitzelSatt – €10 for all-you-can-eat schnitzel. Pork or chicken.

There was a time where I would have just wolfed down three plates of breaded Fleisch, no problem. Adrift on the rising tide of animal-free eating, I’ve evolved into a part-time veghead.

On Sunday, I travelled out to a place called Haßleben, 80 kilometres north of Berlin in the bucolic Uckermark, for a demonstration against the kind of factory farm that makes the aforementioned all-you-can-eat schnitzel possible. In 1975, the East Germans built an intensive pig farm in Haßleben (literally “hate life”!) for 140,000 animals. The place was closed down after German reunification, but Dutch investor Harry van Gennip is planning to re-open it as a farm for 36,000 pigs. The ecological, economic and ethical implications of such “farms” – which have nothing to do what we grew up thinking a farm was – are all well-known. The land around the site is still contaminated from the animal waste dumped there in communist times.

Driving into town, we passed a banner from “Pro-Schwein“, an organisation (with happy pig cartoon logo) which is in favour of the new factory farm, but a few hundred metres from the centre of the village, in a muddy lot between the huge concrete barns and some blocks of abandoned GDR Plattenbau flats, 1000 people with umbrellas braved heavy rain to hear impassioned speakers. The crowd was a mixed bag: down-to-earth locals, dreadlocked Berliners with dogs and activists from similar protest groups across Germany. Morale was maintained with an excellent vegan potato soup.

An especially disturbing aspect to this whole thing: €1 billion in EU agricultural subsidies flows into the German meat industry every year – and it primarily goes into projects such as this. At the same time Germans themselves are eating less meat as vegetarianism and even veganism go mainstream. The solution: export the pork to developing markets around the world. At the demonstration, an activist from Ghana spoke out against cheap meat imports from Europe and their destructive impact on small farmers there and that country’s food independence. There’s really not much good to be said about factory farming. Even the “local jobs” argument is short-sighted since every new factory farm is a threat to small, family-run farms.

Despite all the protest, the chances that Haßleben will go into business soon are still high. Agro-business has friends in high places in Germany. But still: next time you’re tempted by all-you-can-eat schnitzel, or even just a simple bratwurst, think “Haßleben” and you might lose your appetite.