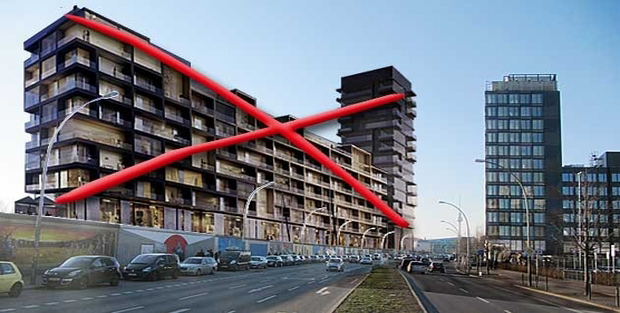 So, thanks to God, our paternalistic, all-loving “governing mayor”, Klaus Wowereit, has swooped in and hammered out a “compromise” for the East Side Gallery: the planned 20 metre hole will be patched up again and an already existing hole a little to the left will be expanded. The “investor” behind the controversial Living Levels block, Maik Uwe Hinkel, has graciously accepted to share a driveway with the anonymous “Israeli investor” who plans to grace the neighbouring plot with even more awesome luxury flats.

Note to Mediaspree activists: you can’t have it all – an intact stretch of the Berlin Wall AND a riverside that hasn’t been sold to private developers.

I smell a rat. Was the whole thousands-strong demo against the partial destruction of the East Side Gallery just a distraction from the real controversy: the fact that the city (and the Bezirk of Friedrichshain-Kreuzberg) is allowing private real estate development (a) in the former “death strip” of the Berlin Wall, and (b) in the middle of a public riverside park.

At the end of the day, a few metres missing from the East Side Gallery is no tragedy.  There’s plenty of street art in Berlin, some of it quite good and the only reason this work gets any attention at all is the canvas upon which it is painted. For me only two works have really stood the test of time: Thierry Noir’s 12 colourful blobby cartoon heads representing the 12 victims who died in this stretch of the death strip and Dmitri Vrubel’s iconic “My God, help me to survive this deadly love”, depicting the famous 1979 kiss between Leonid Brezhnev and Erich Honecker. The rest of the paintings are all rainbows and stars and pothead surrealism – cool for teenaged tourists, but not much else.

The real scandal is the continued sell-offof Berlin’s public land. Let the protests continue (check out this petition in English).