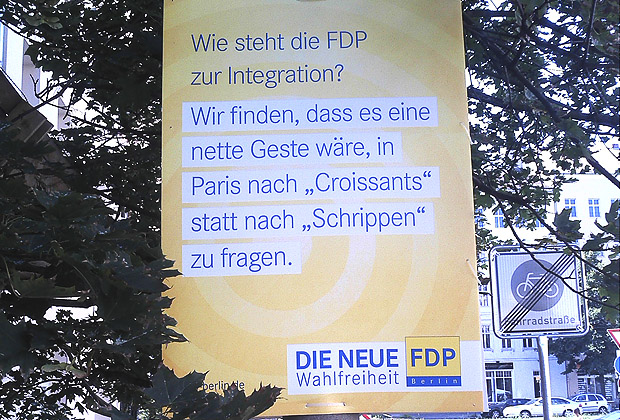 When I saw this hanging on a local lamppost, I thought, “Gosh, this really tops it all.” Thank you FDP (Freie Demokratische Partei) for interrupting my walk to the office with your very special brand of nonsense.

Translated, this poster – for the Berlin elections on September 18 – says: “How does the FDP stand on integration? We think it would be a nice gesture, while in Paris, to ask for ‘croissants’ and not for ‘rolls’.”

So, do they mean there have been problems with German tourists asking for Schrippen (rolls) while on holiday in France?

No, I suspect those silk-scarved FDP chaps (lawyers, estate agents, pharmacists, low-tax fanatics with a thing for gay marriage) have been using the quizzical humour of the German professional and moneyed classes to make a point which could be construed as being a wee bit ausländerfeindlich. Let’s break down their befuddling message, bit by bit:

The slogan kicks off with the pompous, condescending “It would be a nice gesture…” Indeed. It’s a passive sentence, apparently addressed to no one in particular. But we know they mean the Turks, the Arabs and assorted foreigner riff-raff living off of the taxpayer.

Moving on: “While in Paris…” Nice, subtle way of mentioning that “we’ve got buckets of cash and like to spend it in posh, tasteful holiday destinations.”

Next: the confusing finale about croissants and Schrippen (an Ossi, working class word – FDP people always call them Brötchen). Here we arrive at the crux of my confusion about their message: Should people integrate into Berlin and Germany by ordering rolls and not croissants, which are nevertheless widely available here? Do they mean foreigners should speak German at the bakery? Do they mean Arabs should give up their own breakfast traditions? Am I supposed to give up Weetabix? Why didn’t they just write “Currywurst essen, Döner raus!” The yobs at NPD or Die Freiheit or Pro Deutschland would have put it that way. But the genteel folk at the FDP seem to have trouble expressing themselves about “integration” directly. Dear FDP – what the hell do you mean?