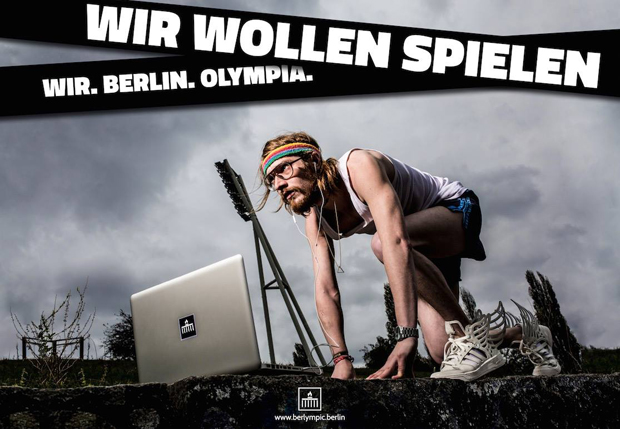 Berlin’s campaign to host the Olympics in the next decade is online and already has an impressive 351 likes on Facebook! What a waste. We’re not going to get the Olympics anyway. Despite being the capital of Germany, the country that likes to lecture the rest of Europe on thriftiness and punctuality, Berlin can’t build anything within cost or on time. Nonetheless, let’s take a look at the main selling points presented on the “Wir wollen spielen” website:

1) “Money for all of us.” This one is a lie, plain and simple. Millions of athletes, journalists and sports fans will spend money, for sure. But how will your average Lidl cashier or English teacher or truck driver earn more money during the Olympics? A mystery to me. And besides, AirBnBing your flat to tourists will be totally illegal by then, anyway. “Even Spätis will profit.” Who cares?

3) “Us together.” A grand project like the Olympics will bring us together as a city. Nope. Why would it? Oympics = more tourists, more construction, more pollution, higher rents, higher prices, more noise, more blocked off streets. The Berlin Marathon and all the other sports events over the year already cause enough havoc as it is. What’s there to celebrate “together”?

4) “Sport and joy rather than commerce” because “Berlin has learned that money isn’t everything.” Sounds like a slogan more fitting to a ideological dictatorship on either end of the spectrum. It also contradicts point one above. And it’s a lie. Non-commerical Olympics? Tell that to the sponsors!

5) “Sport? Yes we can!” (“Sport? Könnwa!”) Yes, Germany is good at organising sport. Yes, Germany has hundreds of thousands of sports clubs. So what? Germans are organised. Germans like sport. So what? Does that mean we want the Olympics? No.

So, what is the point of hosting the Olympics? To have the world’s attention on Berlin for a month or so. While we’d prefer the international media to focus on present day Berlin, everyone knows there’ll be a feeding frenzy on stories about the first Berlin Olympics (which were probably very well organised), the ones presided over by you-know-who. There’ll be a slate of new Holocaust documentaries and Hitler TV specials and Jesse Owens tributes. Do we want all that? No.

And besides, the Olympics are better on TV.