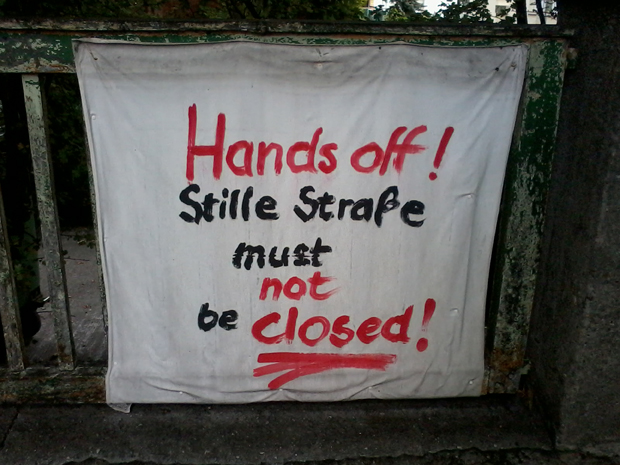 A long time ago, my frail, Nazi-in-the-old-days and unflinchingly conservative Großmutter would talk about how she loved Joschka Fischer and the early 1970s Frankfurt “Spontis“ for squatting and thereby saving a block of beautiful 19th century buildings in central Frankfurt which had been slated for destruction to make way for bank offices. This was perhaps the first instance of resistance against gentrification in West Germany.

Surely, Großmutter would have approved of the actions of the Stille Straße squatters – a group of pensioners aged 67 to 96 who have been fighting for the last few months to save their social club from closure in Pankow in the northeast of Berlin. Unlike the 1970s radicals, the Omas and Opas of Pankow have remained non-violent, apart from reports that a Hausmeister got a firm slap on the wrist when he tried to change the locks.

Tagged the “oldest squatters in the world” by the international media, the Pankow activists are by no means the first oldies to get involved in squatting. In the 1980s, 60-something Berliner Klara Franke famously invited to Kreuzberg punks to squat her nearly vacant building in Moabit’s Lehrter Strasse which had been slated for demolition to make way for an inner-city motorway. Her actions saved an entire neighbourhood.

The situation in Stille Strasse is far less drastic. In the spring, the Pankow council voted to shut the senior centre – a charming, sparsely furnished villa just off of Majakowski Ring, a neighbourhood where communist party big wigs once occupied East Berlin’s most lavish homes. The council says it can’t afford the €2 million needed for a legally required renovation to improve the building’s energy efficiency and allow disabled access. And so they wanted to sell the house to an investor… probably some Porsche-driving orthodontist.

When the 300-odd pensioners were notified that their various classes and social groups (ranging from English lessons to art history) would be transferred elsewhere, a hard core of 30-40 refused to budge. They have been sleeping in camp beds, protesting on the streets, even sharing strategies at solidarity evenings with anarchist squatters in Friedrichshain and the Kotti & Co. “occupiers“ protesting against rent hikes in Kreuzberg. The grans – there’s only one man in the core team – are everyone’s media darlings, and have had visits from TV channels in the USA (here’s a video by NBC) and Iran and everywhere in between.

To be honest, when I heard about Stille Strasse, I was skeptical: I thought, Christ, first the Wutbürger with their hatred of modern train stations in Stuttgart and now the Wutrentner of Berlin fighting to save their bridge club. Surely, we have more pressing issues on this planet. Not really a cause close to my heart. This graying country is already run according to the whim of the “senior lobby“, as it is. And Germany has the lowest birthrate in Europe, meaning there’s only one population group that’s growing – and growing more powerful. Another case of old folks squandering my tax money, I thought. Harsh, I know.

Then I went to visit Stille Strasse. I talked to a few people: totally normal, unpretentious East Berlin Omas and one Opa, who had been dragged there by his wife.

I was shown hundreds of press clippings and a “solidarity book“ in which I read their official mission statement:

“With our work, we, the old ones, built up this country after the war and had to do with very little. We no longer fear for our future. We fear for the future of our children, our grandchildren and our great-grandchildren… they need the space to be able to be able to develop their lives autonomously.

“We don’t want to leave behind a country in which a kid’s music lesson, a visit to the library, or a gymnastics lesson for the elderly have become commodities, and in which everything is only valued in terms of money and in which people who can no longer afford something are simply turned into a cost factor.“

In short, they don’t want to leave behind a thoroughly capitalist, commercialised world, in which, as one newspaper put it, Berlin has to “sell the family silverware“ to survive.

Who can argue with that?

On Thursday, the Stille Strasse gang scored an initial victory: the Pankow council finance committee said it would allow non-profit organisations put in bids to take over the senior centre – offering a glimmer of hope for the squatters.

We wish them the best of luck.