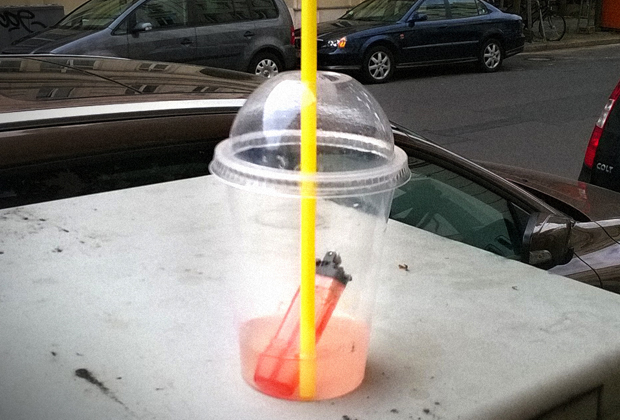 The other day I attended Bite Club – the street food event. You know the one. Arena. Hipsters. Pulled pork (which I suspect is purchased at Lidl before being “pulled”).  Nice event. For €10 or so you can stuff your face with handmade delicacies from around the world and quaff an alcoholic “craft” liquid. And you get to enjoy some deep beats and some interesting people watching.

The thing about the street food movement – not unlike the reviled mainstream fast food industry – is that it produces ungodly amounts of garbage: aluminium foil wrappers, paper bowls and cups, plastic knives and forks. This scene is often sold to us as something different: sustainable, regional, caring, made-with-love. Trash is street food’s blind spot.

Over the last decade, American-style throw-away food and drink culture has literally flooded Berlin with rubbish. Coffee bars have created an entirely new category of trash previously unheard of Berlin: the to-go cup. Once you begin to look around, you’ll see gazillions of these non-recyclable little bastards: under cars, jammed into overflowing bins, stuffed up drainpipes. Double-cupping – the practice of pouring one coffee into two coffee cups – is now widespread. Next time a barista tries to pull that one on you, do what I do: politely shout: “Do you realise that’s made out of a dead tree?” Better yet: just don’t get your coffee to go. Easy. And if you must drink your coffee while walking down the street, at least forego the plastic lid. Or get a Keep Cup.

Even more specious for me is the tendency for trendy cafes to serve things like organic lentil salads, soba noodles and smoothies in disposable plastic containers, even for people ordering their food FOR HERE. Smoothie places like Daluma or The Juicery or veggie chain Goodies try to buy their way out of their guilt by serving stuff in “compostable” or “biodegradable” plastic. What a con! Waste is waste. Goodies at least earns some get-out-of-jail-free points for using recycled paper napkins. But truth be told: these types of places that nourish your glowing post-yoga body with pure, nutritious food also produce sackloads of toxic trash, most of which ends up in Berlin’s incinerators.

Then there is the spate of new delivery services – which also encourage endless waste: pigging out on delivered pizza in front of your X-Box or eating your takeaway noodles from a foam box at your desk instead of just cooking yourself or walking to the nearest Imbiss seems to have become the norm in Berlin. The new workaholic culture that emerged with the rise of the start-up scene in Berlin brings with it a lot of garbage.

At the same time, Berlin is reputed to be a mecca of everything sustainable, a hotbed of veganism, urban farming, renewable energy, recycling, upcycling, reusing, repurposing everything, right? “Everybody” rides bikes, shares cars and couches, takes the train, tram or bus, don’t they?

Local politicians Daniel Buchholz (SPD) and Danny Freymark (CDU), both experts on environmental policy in their parties, recently launched a debate about the trash issue by proposing a 20 cent tax on to-go cups and pizza boxes. Would this make much of a difference? Probably not by itself. The culture itself needs to change. The food sector needs pioneers to experiment with radical waste-free projects like Original Unverpackt – the packaging-free grocery store in Kreuzberg. Their success is proof that people will eagerly embrace a new non-wasteful culture if given the chance. A system of recycled or reusable containers and cups for street food and coffee to go could enjoy similar popularity. Berlin, if anywhere, is the place to pioneer such a shift.

Update: Just a few days after writing this post, I was thrilled to discover the Tiffin Project – a project for reusable to go food containers in Berlin! Their crowdfunding campaign was launched just a few weeks ago and runs till June 30.