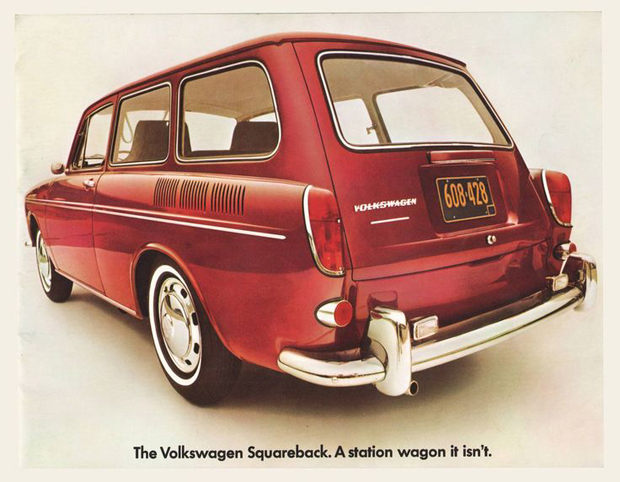 I like to make fun of people for their sappy, irrational loyalty to brands. The fanatical Apple worshipper is of course the non-plus ultra of this animal. In his or her world, asking “Why is the iPhone so bloody expensive?” is akin to blasphemy and will provoke hysterical reactions.

For my whole life I have considered myself above the cheap tricks mega-corporations play to get consumers to consider them friendly, attractive entities that enrich their lives as opposed to planet- and people-destroying monsters.

There was one totally irrational exception though: Volkswagen! I always loved Volkswagen. Growing up in New Mexico, USA, my first car was a VW, a beige 1973 “squareback” station wagon with an air-cooled pancake engine that sounded like a WWII machinegun underneath the trunk. At age 16, I would sneak into junkyards to steal brake shoes and carburetors and spend countless hours repairing the damn thing with the help of John Muir’s classic psyschedelic repair manual How to Keep Your Volkswagen Alive. This was in the late 1980s and the counterculture of the 1960s-1970s was still somehow in the New Mexico air and the VW Beetle – and by association, the quirky squareback – was its car. I truly loved that ridiculous, weird vehicle. Those two high-school years I spent covered in engine grease instilled in me a deep feeling that VW was just rad.

The seeds of brand loyalty were thus planted. Ever since – despite a brief flirtation with Subaru – I have remained blindly faithful to VW. In 2001, a couple of years after moving to Berlin, I bought a silver Golf III diesel with a leaky sunroof for 800 DM. If it rained at night the driver and the passenger would get a cold shower when you started up the car in the morning. A few years later came a Golf IV Kombi, also a diesel. And for the last three or four years, it’s been a Golf V plus – a rather spießig Prenzlauer Berg family-mobile pimped up with ridiculous amounts of electronics. Now that our kid takes the U-Bahn to school, I drive it a less and less. It’s lightyears from that primitive old “squareback” but that same VW brand – cooked up by the Nazis in the 1930s, hijacked by the 1960s counterculture, and somehow perpetuated by advertising and branding as something noble and admirable for decades – “spoke” to me. I have even visited the VW Autostadt – a fun, futuristic car-themed campus in the shadow of the massive original VW plant (still the world’s biggest auto factory) in Wolfsburg. The Autostadt showcases the latest models and generously hosts interesting cultural events as 5000 cars roll off of the assembly line every day.

This week’s emissions scandal in which it was revealed that 11 million VWs contained software designed to produce fake emissions reports has burst that feel-good bubble. Volkswagen has been exposed for what it is: just another ruthless, polluting, profit-hungry beast.

The diesel scam has exposed how backward thinking VW has become. Toyota and Honda lead in hybrid technology. Daimler produces the Smart. BMW pioneered car sharing and, is now powering ahead with electric cars. VW’s electric e-Golf is nice, but just so absurdly expensive that it will never sell more than a few thousand. A vanity project to greenwash the buckets of money VW makes with huge Phaeton sedans, Passat station wagons, Touran mini-vans and Toureg SUVs. And of course, the Golf, the best-selling car of all time. But unlike the boxy little Golf I that revolutionized the car industry when it came out in the 1970s, there’s nothing cool or alternative about the Golf now. And what’s truly insane is that today’s Golf, thanks to increased power, weight and gadgetry, is no more fuel efficient than Golf I.

I always dismissed the other big German car brands with a kind of reverse snobbery: BMW was gauche, nouveau-riche, tacky; Mercedes-Benz was just for the wealthy, conservative, status-obsessed. Audi (which belongs to VW) was for yuppie-scum. By contrast VW was down-to-earth, of the Volk. Somehow, I believed in that shit.

VW may well have to pay billions of dollars in fines to the US authorities – and is now facing massive problems in Europe, too. Oh the sweet irony: the Americans, of all people, teaching the Germans a thing or two about environmental regulations.

My quarter-of-century love affair with VW is over. The bubble’s burst. The fat lady has sung. And for VW, the chickens have come home to roost.

In fact, my love affair with all cars is over. These extravagant lumps of metal drain our bank accounts and poison our air. They clog our streets and threaten our safety. Then there’s a little thing called climate change.

In Berlin, despite being the capital of Germany, has no car industry to speak of. What better place to develop alternatives. We need more bikes, scooters, skateboards, more public transport, more trains. Berlin should step up to the plate and take the lead towards a car-free future!