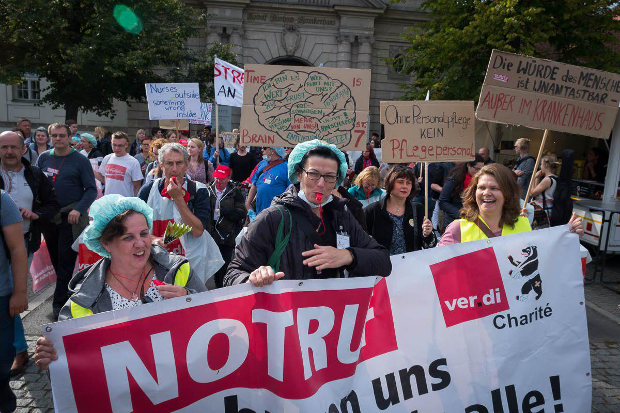 A friend of mine was admitted to the hospital on Monday. All weekend it seemed like he had a bad flu, was taking Paracetamol, etcetera. But when he went to a doctor on Monday, it turned out he had a lung infection – his liver and kidneys were failing. He was whisked to the Virchow-Klinikum, one campus of the Charité university hospital in Wedding, and put into an artificial coma in the ICU. They say he’ll recover, but it’s been a terrifying experience for all his friends and family.

I’m lucky that I haven’t yet spent much time in hospitals. But two weeks ago, I spent a lot of time at Virchow as a reporter. Three hundred nurses went on strike for five days. They weren’t calling for better wages – they want more personnel. One of their demands is to have one nurse for every five patients in a typical station, and one nurse for every two patients in the ICU. Every nurse had their own horror stories: Like working the night shift alone at a station with 30 patients. If two alarms go off at once, then you have to decide who to ignore. No one has enough time to do the job the way they are trained to do it.

In the last two decades, the German hospital system was restructured in accordance with free market principles. They thinned out staff as much as possible so they could focus on high-revenue operations and turn a profit. Service workers like cleaners and logistical workers were outsourced to low-paying subcontractors. So there aren’t enough cleaners – which has led to at least 150 patient deaths in Berlin hospitals from “superbugs” in the last five years. This neoliberal health care system has been a disaster for patients – as well as for the workers.

The topic made it into the German election campaign when a 19-year-old nurse-in-training confronted Angela Merkel on a TV show. He said the lack of caregivers was affecting seniors’ basic human dignity. And all of a sudden, all the parties were promising improvements. But these are the same parties that created the current system.

The right-wing tabloids claim that the nurses’ strikes are endangering patients. But the opposite is the case: The normal operations at the hospital are a danger to patients. If the strikes are successful, everyone will benefit. On Tuesday, the trade union ver.di announced that the hospital is willing to negotiate the demands for more personnel. Let’s hope this works!

Now I think of my friend, hooked up to a very scary room-sized machine that might have descended straight from a UFO. (I’m not allowed to see him because I’m not family.) And I’m infinitely grateful to all the workers at Charité who are keeping him alive: nurses, doctors, service personnel, med students. Their strike slogan is: “More of us is better for everyone!” And it may seem strange, but if the ICU goes on strike, it’s the patients who benefit.