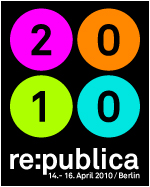 At the social media conference re:publica 2010 (April 14-16), the Friedrichsstadtpalast will again be packed to the brim with over-optimistic cash-rich nerds, ad men and women listening in, trying to understand this internet thing and impoverished “content providers” left clueless about how to pay the bills. Let’s not forget the starry-eyed Hacks for Democracy! Expects loads of Steve Jobs-style power-pointing!

The conference is supported by Goliaths Google, Nokia and Kodak. There’ll be a lot of talk about empowerment, feminist net culture 2.0, blog monetization. There’ll be a Twitter reading by Berlin’s internet clown Sascha Lobo and some fun bits about internet sex by a blonde woman from San Francisco, and yet, at the end of the day, we all know that, despite the fragmented, diverse, empowered, ‘democratic’ chit-chat, a few Californian mega-corps are making billions as we gleefully upload our social lives for free into their content portfolios.

Is there online life outside of Google and Facebook? These ever-cheerful leviathans preside over our centralised virtual existance. The deal is simple: they get our lives, we get fabulous computing power, they make heavenly profits (Google earned $1.48 billion in the first three months of 2010). Who can say no to that? No one.

That’s why there won’t be anyone protesting outside the DDR-reconstructed cabaret hall as our new lords smugly plan our ‘social’ future? Even radical anarchists use Googlemail, Blogger, Facebook, Nokia and they’re too busy playing for the May Day street party.