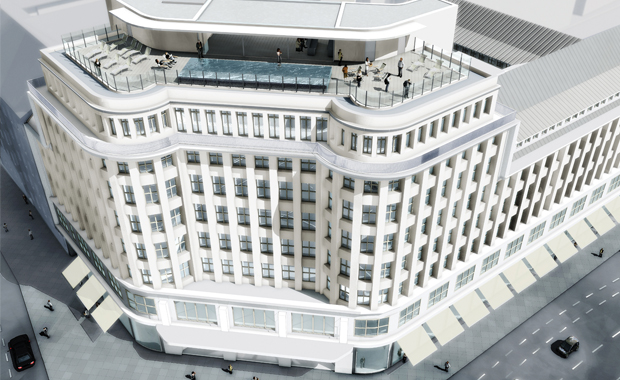 There’s something fundamentally un-Berlin about a private members’ club. From Marx and Liebknecht, from Red Rosa to Red Army, from National to Soviet Socialism, from Bundeswehr deserters to punks to modern-day nihilists, from yesterday’s Lumpenproletariat to today’s hungry artists, Berlin has always prided itself on its special brand of underdog rebelliousness, rooted in a strong disdain of for the upper classes and special belief in grassroots communal equality.

So here’s another sign of our changing times. After London, New York and Hollywood, and just before Miami, Berlin’s launching its own special club for special people – in the “creative industries”.

Since we are in Berlin, there had to be a special twist: Soho House has taken over the huge former Bauhaus building on the corner of Torstraße and Prenzlauer Allee. Built as a department store in 1928 by a Jewish businessman, it was seized by the Nazis and became the headquarters of the Hitler Youth.

After the war, it was used by the Communist Party of Germany to house its archives. Soho House has restored a certain pre-war flair, mixed with resolutely Berlin touches: raw walls, industrial elements – the reception area, made of scaffolding, resembles the front desk of a Berlin night club.

Take the lift to the upper floors, though, and you’ll be transported to the cushy world of a gentleman’s club, complete with nostalgic references to the Empire: a pith helmet fashioned out of wood, flowery chesterfields, uniformed waiters.

For €75 per month, members have access to a state-of-the-art gym; the “Cowshed” spa, which boasts a large hamam; lounges; a “Politbüro” event space; restaurants; and, best of all, a rooftop terrace with a fabulous view of Mitte and the vast Plattenbau blocks around Alexanderplatz – gritty chic indeed.

One imagines sundown gin and tonics with one’s fellow media executives; shoes off, with feet in the small heated pool. Just think… For the price of a gym membership at one of the city’s top health clubs, you get the chance to hobnob with the 800-plus members who have already signed up to elevate themselves above Berlin plebeian realities.

You don’t have to be a member to stay at the hotel. With only 40 well-designed, retro-funky rooms starting at around €100 per night, it’s quite a bargain for Mitte these days. Even the amazing, immense “Extra Large” room, reminiscent of a 1940s Hollywood movie set, feels like a dream deal at €400 per night!