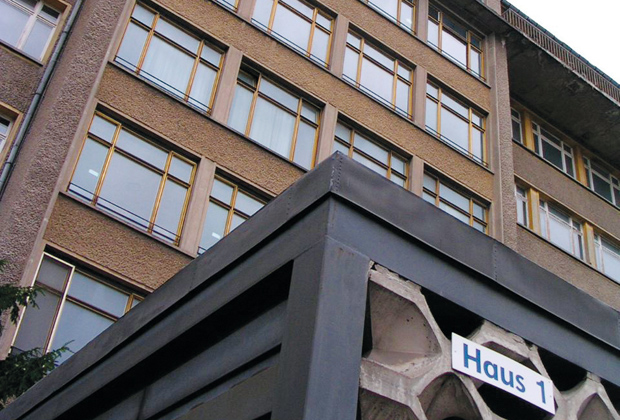 A few years back, I had a visitor from Texas. His list of must-see Berlin sights was comprised of one item – the Stasi Museum. So we trekked out to deep, dark Lichtenberg, then rooted around until we found it, tucked into a courtyard: a crumbling, gray building that looked more like an abandoned warehouse.

Inside was a perfectly intact, GDR-era time capsule of linoleum floors, yellowed drapes and 1960s-style furniture that brought new meaning to the phrase, “banality of evil.” We walked into a lobby that felt like a run-down school except for the small, gray, windowless van parked near the stairs. Inside the van: human-sized cages.

We joked about their tiny size. A gray-haired man joined us. Yes, he agreed in broken English, they were very uncomfortable. He knew from experience – he’d been arrested and brought here for interrogation in one of these vans. Our detached museum-goer façades crumbled as we stared history in the face. It’s the kind of eye-opening moment museum curators crave but rarely achieve.

These days, Berlin’s Stasi Museum is even harder to find. Last March, the federal government ordered a top-to-bottom renovation of the museum’s home and sent its exhibitions and staff of Stasi victims packing, possibly forever.

From 1950 to 1990, the Stasi – the East German Ministry for State Security – was the “sword and shield” of the Communist regime, waging a campaign of repression against the nation’s citizens. With an insidious army of informants, it was arguably more effective – and hated – than its Soviet brother, the KGB.

That hatred boiled over on January 15, 1990 when a mob of East Berliners stormed the Stasi complex and took control of the buildings. Soon after, a group calling itself the “Anti-Stalinist Action” (ASTAK) took over the main building and established the unofficial Stasi Museum.

The museum was uniquely grassroots, run by people whose lives had been touched by the Stasi. They constructed an old-school collection of wall-mounted boards telling the Stasi’s sordid history alongside James Bond-style contraptions, like a camera hidden in a cigarette box and an AK-47 disguised as a suitcase.

Most memorable was a collection of jars containing pieces of fabric imbued with the body scents of suspected dissidents to be used, if needed, to send trained dogs to hunt them down. But the star of the show was the building itself, which had housed the office of Erich Mielke, head of the Stasi from 1957 to 1989.

Since the release of the Stasi-themed film The Lives of Others in 2006, the ‘Stasi brand’ is hot. Museum visitor numbers have climbed each year, reaching 100,000 last year. But the museum’s success inspired ill will from Lichtenberg politicians who want the Stasi complex demolished (reminders of the ugly past) and ex-Stasi officers convinced they’re being unfairly vilified.

Finally in March, the museum’s landlord – the German government – sent a letter of eviction. The immediate reason was the need to renovate the crumbling building. But once the repairs are finished, the government plans to install its own official Stasi memorial.

So what about the Stasi victims who’ve made the museum their life’s work? Officially, the government wants to cooperate, but privately they discourage outside groups from laying claim to East German history – even if those groups are living artifacts of that history.

While Building 1 undergoes renovation, the ASTAK folks have opened a condensed version of their museum across the street. They distrust authority and question every aspect of the government’s plans. How can the original GDR interiors – and that uncanny feeling of being enveloped in history – survive the renovation? They refuse to hand over their collection of Stasi artifacts and insist that new, slick, multi-media displays can’t replace their own first-hand accounts.

At the moment, it’s a stand-off. ASTAK wants its old building back. The German government says that’s not possible. So the next time my Texan friend visits, he might have the luxury of two competing Stasi museums – across the street from each other – each telling its own version of East Germany’s dark history.