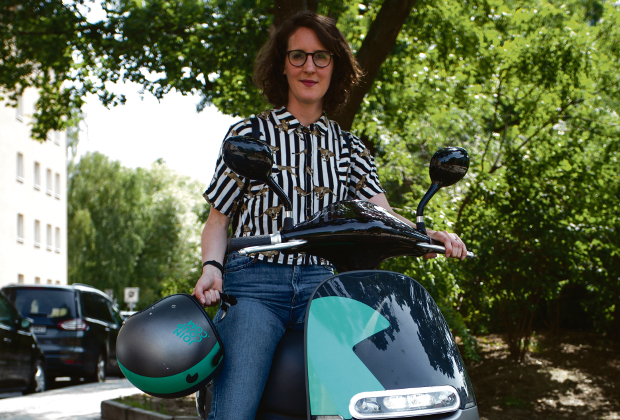 Bikes, e-scooters and skates: we tried out five of the latest ways to roll yourself around Berlin.

Want to feel like a badass biker, but don’t have a motorcycle licence? With e-scooter sharing, anyone with a valid drivers’ license can hop on one of a fleet of zippy electric scooters scattered around Berlin. Since they were introduced in April, the distinctive grey-and-mint-coloured Coup e-scooters have achieved near-ubiquity here. Recently, they’ve been joined by the retro orange ones of Emmy. Time to take both for a spin…

After downloading the Coup app, you go through a video verification process to prove your license and ID. Though our Mitarbeiter was very friendly (and patient), the process seemed a bit of a faff. But within a few minutes, we were all set and headed outside to find a nearby scooter. There’s been some money put into the company (it’s owned by Bosch), and with some 1000 scooters across town, it’s easy to find a ride.

The app easily unlocks the bike and the storage space in the trunk, where we found the (mandatory) helmet. We put it on, pressed go, turned the throttle and… we were off! Riding from Mitte to the edges of Neukölln took just 20 minutes, and it was so much fun weaving through the streets that we were grinning the whole way. At just €3 for 30 minutes, the cost is comparable to a BVG single ticket, and if you love it you can get the whole day for €20. There’s no registration or sign-up fee, and payment is taken by credit card.

Likewise, signing up for Emmy was very simple, with license and ID verification also necessary before being able to hit the roads. This can be done with video via Skype, or in-person at selected spots around town – in our case, we were able to stop by a local hotel and get verified within minutes.

The Emmy fleet is much smaller than Coup’s, with 350 scooters in Berlin, many seemingly clustered on the edges of town. It was not easy to find one near Jannowitzbrücke, but we got lucky. As we were scanning the app, someone dropped a scooter off only a short walk away. Just as with Coup, we were given 15 minutes’ free time to get to the bike after you click “reserve”.

Unlike Coup, which has just one sleek, sporty-looking model, Emmy offers three different models: a retro-version, a sporty version and a so-called classic. Ours was a retro-model called “Lars”. Using the app, we unlocked the helmet box mounted to the rear, picked a helmet and took out the key. Yes, an actual key, which felt rather retro in itself. While Coup rides feel smooth, this was a little bumpier somehow – perhaps due to the helmet box on the back, perhaps due to it being a “retro” model – but a fun ride nonetheless.

Emmy’s regular tariff is €0.19 per minute, or €0.59 per kilometre – the app calculates the cheapest tariff, so if you get stuck in traffic it means you only pay per kilometre If you’re driving for a full 30 minutes, it’s more expensive than Coup, but it can work out cheaper if it’s just a short trip. Payment can be made by credit or debit card, and you get a message at the end of the booking to confirm the charge. AB

The verdict: Coup has better availability, the price structure is clear, and the scooters are light and nippy – perfect to dodge any traffic. That said, since Emmy offers two helmets, it’s better for people travelling zur zweit.

Bikes at your fingertips

Whether you’ve got visitors in town, your own bicycle is at the workshop or you’re not ready to commit to one set of wheels… sometimes, you just need to “borrow” a bike. Since spring 2017, Berlin’s had two “floating” bike rental companies, both operating under similar premises: download an app, register with a credit card number, locate bike on mobile map, rent bike.

In May, the Leipzig-based company Nextbike unveiled their fleet of 2000 bikes in Berlin and corresponding app. When you sign up, you pay a registration fee of €1 to verify your payment method. Once you’ve proved your financial viability, your first 30 minutes will cost €1, with each subsequent half-hour costing €1.50. A “day pass” – unlimited 30-minute rides within a 24-hour period – costs a meagre €3, the ultimate short trip service. You can return the bike to one of Nextbike’s 700 Berlin stations, or, for an additional 50 cents, leave it at any street intersection within the S-Bahn ring.

Lidl Bike was officially introduced in March, after the discounter paired with Deutsche Bahn to replace their Call a Bike service. By paying either a “basic” or “comfort” tariff, users can choose, simultaneously, their rank in the biking world and their preferred length of rental. A basic tariff of €3 gets you 30 minutes for €1 and 24 hours for €15, while a “comfort tariff”, at €9 per month, has you biking for €12 per day. An extensive virtual map alerts users to one of 3500 Lidl bikes in Berlin – enter the code, unlock, and ride!

Unfortunately, our own experience was not quite so straightforward. The Lidl Bike app refused to accept our frantic registration attempts, forcing us to Google Translate pages of (German) text until we understood that we had to call to register our bike account. Then, the matter of actually finding a bike: although Lidl’s map said we were literally on top of one, we could not seem to locate it anywhere. Meanwhile, Nextbike’s app proved to be far more user-friendly than Lidl’s: after signing up, we were able to immediately scan the bike’s QR code and start riding. Additionally, Nextbike’s English page makes their app ideal for tourists. AK

The verdict: Both companies’ bikes are relatively light with sturdy frames, adjustable seats, baskets and easily-adjusted gears – so as long as you’re sticking to short trips and don’t feel like venturing too far outside the Ringbahn, Nextbike’s English-friendly, flexible service is the way to go! More committed users on longer trips might want to go Lidl.

Bicyclists have their Sternfahrt, that annual event where they get to pedal away on closed-off streets and even highways all over Berlin – but why should two-wheelers get to have all the fun? Once a month for the rest of the summer, Skate by Night blocks off 24km of Berlin streets exclusively for roller skaters, Rollerbladers and skateboarders – no bikes allowed. Organised by the event agency B-Event, the evenings are sponsored by the French sport giant Decathlon and the health insurance company AOK, meaning that although you’re officially supposed to pitch in a €2 participation fee, skate rental is free(!) if you leave your ID card. Some 2000 skaters showed up at the May opening event, including many families and a roller derby crew or two, cheered on from the sidelines by enthusiastic spectators. Officially, portable speakers are verboten, but don’t be surprised if you hear Avril Lavigne’s “Sk8r Boi” blaring from someone’s pocket as you speed down the car-free Karl-Marx-Allee. If you’ve been practising your roller disco moves at SO36 all winter, now’s your chance to take them into the open air.