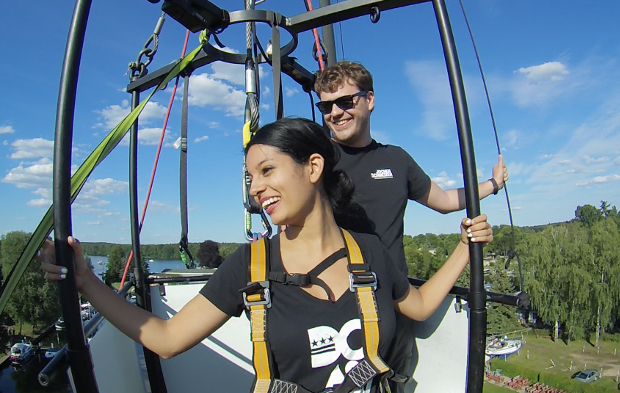 Summer isn’t just for relaxation – if you’re an adrenaline junkie, now’s your chance to go bungee jumping out in the Berlin suburbs. We tried it out.

With its quaint ice cream shops and relaxing lakeside views, the far-southeastern borough of Berlin-Schmöckwitz hardly seems like a place for daredevils looking to get airborne.

Until you hear the ear-piercing screams coming from the giant, 50-metre crane just off of Adlergestell, one of Schmöckwitz’s main roads.

This is where Jochen Schweizer, a Munich-based company that specialises in adrenaline rushes, has been running its extreme bungee jumping adventures for the last five years. For €99.90, thrill-seekers can leap into uncertainty with their lives liter ally hanging on a single rope. The company has set up its monstrous- looking crane next to a bright blue marina dotted with glistening yachts. If you’re going to risk breaking your neck, why not do it in a place that looks like a postcard?

Bungee jumping is a mental test more than anything, and one I felt like taking. I took the S7 train and a tram to Zum Seeblick, which is about 45 minutes from central Berlin and just steps from the Jochen Schweizer check-in. The staff members asked me to step on a scale – you have to be at least 50 kilos – and politely requested I sign documents relieving them of any responsibility were a cord to snap. From below, I could see someone swinging in the air limply like a ragdoll. Okay.

Another guy strapped me into a body harness that hugged my legs like a diaper and tied securely around my chest. I watched the other jumpers while waiting my turn: One burly man wailed like a child; one woman didn’t make a single sound, but returned from her jump ghost-white.

Then I was up. The good-natured instructors cracked a couple jokes to relieve any jitters: “Don’t worry, you won’t die.” “You’re the last person to jump today and we want to go home early… If it doesn’t go well, that’s like five or six hours of paperwork for us.”

I stepped onto the crane and felt it slowly crank its way higher into the sky, rocking back and forth the entire time. My instructor explained how I should hold my wrists together above my head for safety reasons. I prepared to launch into a list of questions, but he interrupted me: “Okay, 3-2-1, bungee!”

I looked at him blankly.

“Oh.” Before I could think about it too much, I felt my feet leave the platform. The leap wasn’t ceremonial or graceful: I dove head-first toward the sailboats in the dock and heard a choked squeal tumble out of my mouth. My body was completely inverted and the sensation of free-falling overtook me immediately. My vision melted into a dizzying blur. Just as I started to see straight again, the cord recoiled and whipped me back into the air – hard. I flung in the air, twisting wildly, and rocked like a pendulum for just a few more moments.

Before I knew it, it was over. The whole thing lasted a maximum of two minutes and in the end, I didn’t have much to show – other than the knowledge that I’d willingly thrown myself off of a crane.

Getting high around Berlin

AbenteuerPark Potsdam This intricate climbing course is designed for the kiddies, but the highest ziplines, at 12 metres, are enough to freak out the adults. €29 lets you spend the whole day swinging around the leafy park.

Baseflying One of the newest creations for stunt lovers involves throwing yourself down the side of a massive building – think Spiderman. Jochen Schweizer organises an excursion right at Alexanderplatz for €79.90.

GoJump Skydive Bungee jumping not hardcore enough for you? Take a tandem dive out of a plane for €139 in Brandenburg. The dropzone here gives you a clear view of the airfield from 4000m high.