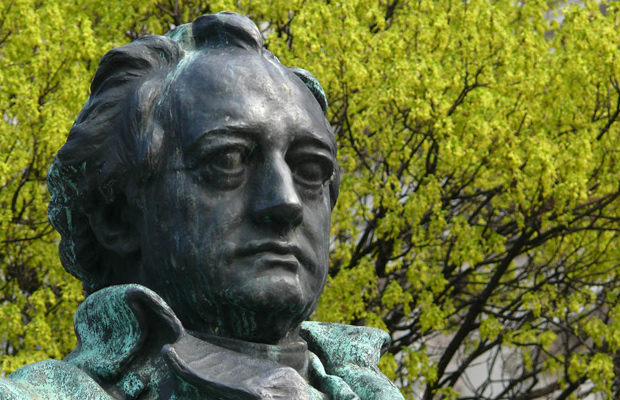 “Wir hoffen immer, und in allen Dingen/ Ist besser hoffen als verzweifeln” said Goethe: “We always hope, and in all things it is better to hope than to despair.” Goethe wasn’t a TeBe fan though, and if he had been, he’d be revising his words.

Over the last months, hope was a fixture list that allowed Lila-Weisse fans to identify certain games as the ones where points could be picked up. LFC at home in March. Füchse and Optik Rathenow in April. All going well, the visit of Dynamo in May should be the icing on the cake of Oberliga safety. Especially with the team playing a different game since Markus Schatte took over – more possession, more attacking, less cagey, defensive tactics – simply more football, unless you come from the Mourinho school of stifle and conquer.

Alas, those hopeful games, including Saturday’s against Dynamo, yielded a single point and TeBe are seven points from safety with three games to play. It’ll be the Berlin-Liga for the Veilchen next season, the sixth division and the lowest this old club has ever been in its history. Down there, there is no veil of respectability that the Oberliga lends – no big names like Rostock, Union (despite their youth teams), or Dynamo.

But for 45 minutes on Saturday, hope didn’t seem to be such a vengeful, flighty beast. Thomas Kruschke, promoted from the youth team by the new trainer, was outstanding in the middle of the field as TeBe strung together passing moves that made the team unrecognisable from the one of two months ago. Fuat Kalkan slipped back into the centre of defence and started every TeBe attack with patient, simple passes that sucked Dynamo out of shape in their attempts to regain possession. One of those attacks saw Bayazit Taflan dance around the floundering Daniel Rothe in the Dynamo goal but his finish was casual and was cleared from the line.

TeBe were taking chances. Okan Isik was next, bounding to his feet after a penalty claim to get a shot away. Saved. Then Burak Mentes – over the bar. And five minutes before the break, Kruschke’s outrageous backheel on the edge of the box unleashed Taflan again only for Rothe to get a hand on his shot-across goal.

There was a feeling that something was going to give at half-time. Dynamo’s goalbox had lead a charmed life, but small organisational tweaks can change a game. The visitors came out and held their shape a little better, pressed a little more intelligently, and nicked a goal with their first chance of the game after 59 minutes. A swift counter-attack left Norbert Lemcke with a tap-in, and the momentum had swung.

TeBe, despite their absolute superiority up until the opening goal, had never attacked with enough urgency or conviction. An opponent on the ropes must be battered, but to do so requires a ruthlessness that goes hand-in-hand with experience and maturity. TeBe, with five teenagers in the starting line-up, were pliable against the more seasoned Dynamo. Despite the lower quality of opposition in the Berlin Liga, this will need to be addressed before next season.

A team built on youth is not all negatives. Kruschke looks like a promising talent, making space where there was none and frequently playing through balls that illustrated his class. More than once he carved the Dynamo defence apart, only to react with frustration to his teammates’ inability to anticipate his creativity with purposeful movement.

Dynamo added a couple more on the break through Mathias Steinborn and Nico Päpke as the game settled into a pattern that is all too familiar to TeBe fans. Suddenly no-one wanted the ball, and passes were spending more time in the air than on the floor. The tentative, brittle self-confidence from the first half had finally shattered.

What of Dynamo? They have won four on the trot in the league, allowing them to have one eye firmly on next season, and the other on the midweek Berliner Pokal semi-final against a Türkiyemspor side in search of redemption after a wretched season in the Regionalliga. A victory like this one does wonders for morale. The crest of this wave could carry them further than a cup win and into next season. They, like TeBe, will be hopeful of winning their league next season.