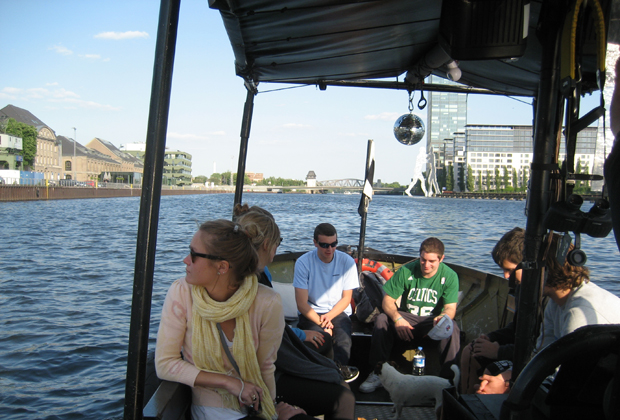 Experimentdays, Berlin’s annual urban-living event, sets up camp this year on the most hotly disputed building site in town: the Spree.

You could look at the decade-long battle over Mediaspree – the scheme to turn the banks of the Spree River into a corporate office park – as a classic David-and-Goliath match-up: scrappy grassroots activists pitted against big-money developers and their politician lackeys.

But it’s not that simple.

The players in the drama also include anti-development politicians, left-leaning landlords, club owners cashing in on anti-Media­spree chic and veteran activists battling each other to claim radical cred supremacy. Everyone’s an outsider, everyone’s a victim and everyone’s got your best interest in mind.

No one knows this better than Dr. Michael LaFond, an American architect and founder of the Berlin-based ID22: Institute for Creative Sustainability. As both activist and academic, LaFond is a cool, sane voice amid the heated squabbling. Since 2003, ID22: has hosted Experimentdays, Berlin’s annual celebration of DIY urban design and cooperative housing.

Last year’s topic was alternative housing across Europe, but this year – in addition to innovative housing – he’s zooming in on Berlin’s own urban planning ground zero: the banks of the Spree between Jannowitzbrücke and Elsenbrücke. LaFond has set a big table and invited all interested parties, including the public, to sit down, hash out their differences and start working together.

The four days of events, September 22-25, will tie together diverse well-known venues along the Spree, including the DAZ (German Architecture Center), its nightclub neighbor, KaterHolzig and performance space Radialsystem V across the river, as well as Kreuzberg’s Markthalle IX. On Saturday, the river venues will be connected, literally, by a speedy water taxi.

In the wake of the September 18 city elections, the gathered Spree activists will have a lot to talk about. There’s strength in numbers, and after all, invited guests share the same goals: well-designed low-rise buildings that allow public access to the river, affordable housing and businesses that strengthen the existing community instead of obliterating it.

In other words, more grassroots communal projects like Spreefeld (see “Spreefeld: third way on the Spree”), instead of garish symbols of corporate triumphalism, like O2 World and the planned Daimler-Tower.

Ultimately, wouldn’t it be nice for us Berliners to actually be able to walk down the Spree from Pergamon to the Badeschiff? The Spreeufer should be für Alle, not just for corporate owners, rich residents or club kids.