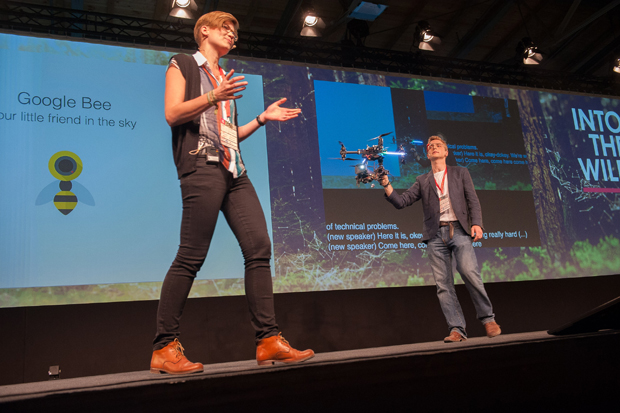 Don’t fight the system – disrupt it! Meet the subversive, satirical, risk-taking Berliners trying to effect change from within.

The Snowden revelations have generated an intense debate in Berlin. But trying to deal with the topic, it is easy either to become paralysed by its complexity, disillusioned by its grand scale, or deterred by fears of surveillance and repression.

Can we imagine new tools and new answers that are not merely based on the idea of hiding if there really is No Place To Hide, as the title of Glenn Greenwald’s book on Snowden suggests? Perhaps we should start focusing on how to empower people to act consciously in society, culture and the media environment.

Some Berlin-based artistic and activist groups have been trying to do just that. Their tactic? Disruption.

Here, the idea of disruption means to generate criticism by “performing the machine” which we want to fight – oftentimes from within.

This practice is nothing new in Germany. Take journalist Günter Wallraff, who in the 1960s went undercover to get insight into power structures and abuses, assuming identities such as a homeless person, an alcoholic and a worker in a chemical factory as described in his popular 13 unerwünschte Reportagen (13 Undesired Reports). His name has even become a verb in Swedish, meaning “to expose misconduct from the inside by assuming a role”. This approach has a double effect: from one side it reveals previously hidden information to the public, and from the other, it empowers them to adopt this methodology and keep the ball of exposure rolling.

Today, in the context of increasingly invasive corporations and government agencies, Berlin collectives have had to get creative. While their methods vary wildly, the goal is the same: to rip away the veil of secrecy around institutions and media corporations, and to get unexpected feedback and reactions – whether positive or negative.

With Hedonist International, whose Fifth Congress took place last June near Berlin, the strategy of infiltration meets the practice of disruption. In their manifesto the members of the “communication guerrilla collective”, as activist Alexander Müller describes it, introduce “hedonism as the engine of a society as the chance to overcome present circumstances”. In their view, “where fun ends, hierarchy begins”. Instead of “playing the system”, their playful interventions liberate or “queer” power structures.

The group’s activities go beyond dancing naked in neo-Nazi hotspots or holding hedonistic nude flat viewing rallies to oppose Berlin gentrification. In 2011, when German defence minister Karl-Theodor Guttenberg was accused of plagiarism of his doctoral dissertation and forced to resign, the Hedonists organised a fake demonstration of solidarity for the minister, attracting many of his conservative supporters and consequently making them very confused with ironic slogans like “Jetzt oder nie – Monarchie!”.

The Hedonists also applied the strategy of disturbance by generating fake Twitter accounts. In the wake of the Fukushima catastrophe, they created an account on behalf of the Atom Forum, the German nuclear lobby, to question their arguments and point out the consequence of the meltdown – until the Atom Forum decided to take legal action against the Hedonists, demonstrating that the system can always force its truth on you, even if you play with the truth itself.

Fake-tweeting for the company DigiTask, manufacturer of the “Staatstrojaner” government spyware exposed by the Chaos Computer Club in 2011, again earned the Hedonists a Cease and Desist letter. To justify its legal action, DigiTask claimed that the spyware was not used in the countries the activists were stating, rather in other countries, including Austria – generating another boomerang effect and causing a scandal among Austrian activists.

Meanwhile, the tactic of the German Peng! Collective is to intrude into corporate conferences. In December 2013 they hijacked the Science Slam in Berlin, organised by Shell to promote innovation by inviting young scientists to present new ideas. The collective showed up with an “amazing machine” that, when turned on, flipped open to reveal the message “Slam Shell” and began gushing oil on the presenters as they demanded cleaner business practices in Nigeria and the end of drilling in the Arctic. 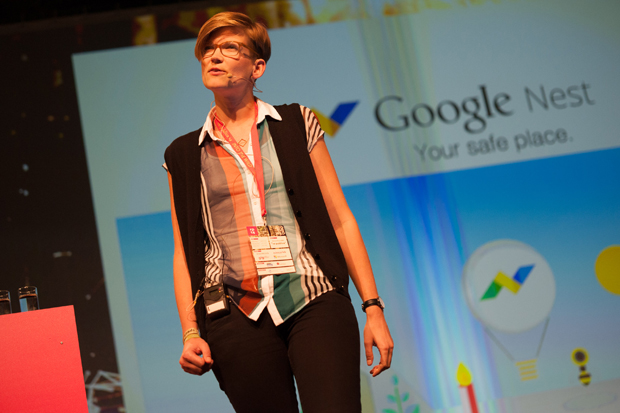 They used a similar tactic at the May 2014 re:publica festival, where, inspired by Google’s acquisition of home-device manufacturer Nest, they posed as Google employees to deliver a presentation about their new, seemingly utopian “Google Nest” technology (for example, “Google Hugs”, which analyses whether users need a hug) under the motto “Your Data. Our Future.” This provoked Google to demand them to stop confusing their consumers and hand over their google nest.org domain, offering $100 for the trouble. But the site had already gone viral, prompting many a media discussion on whether Google had overstepped its boundaries.

Another Berlin-based group that has made disruption a source of artistic practice is the Telekommunisten collective, initiated by Canadian developer and “venture communist” Dmytri Kleiner (an early critique of the existing copyright norms but also the Creative Commons movement, to which he opposed a Copyfarleft licence system).

Active in Berlin for around 10 years, the Telekommunisten have been demonstrating how it is possible to work from within the logics of centralised online (and offline) systems, by imagining a series of “miscommunication technologies” which “don’t work as expected, or work in an unexpected way”.

Their last work, the Numbers Station, responds directly to the recent debate on surveillance and the need for data encryption. Addressed ironically to all spies and whistleblowers, the system is based on decryption cards, which help participants decode phrases delivered by radio communications. By bringing together playfulness and encryption, and making crypto-tools accessible as an artwork, Numbers Station shows that to perform disruption you have to become aware of the possibilities of your Internet presence, and you need to explore its strength while testing its limits.

In this post-Snowden, post-digital era, disruption tactics have never been more accessible. What Edward Snowden did, what Chelsea Manning did and what other whistleblowers did before them demonstrate that disruption is ready to be applied by everyone. Holes in the systems are everywhere, ready to be exploited. What are you waiting for?

Tatiana Bazzichelli is a curator and researcher, author of the books Networked Disruption and Disrupting Business (2013). She was programme curator at the transmediale festival and she is planning a new series of events under the name Disruption Network Lab (upcoming 2015), to bring into dialogue local and international hackers, activists, networkers, and critical thinkers within the framework of art, hacktivism and network economy.