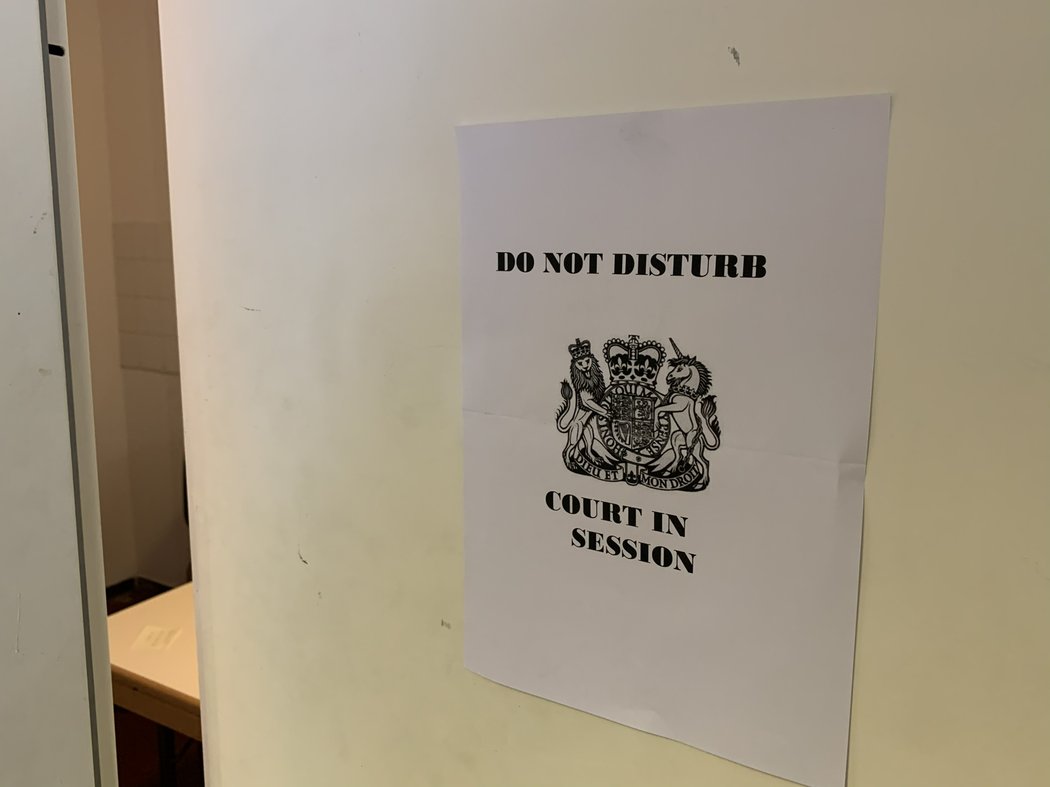 Exberliner has a digital seat inside London’s Old Bailey, where Julian Assange is fighting against extradition to the US. Here’s a recap of the last week’s hearings, as remotely observed from our Mitte office.

In Week 1, we shared our experience navigating the court’s cloud video platform (CVP). Witness testimony from journalism experts, lawyers, and political scientists focused on the underlying political motivations and civil societ impact of this prosecution. In Week 2, there were clarifications from past media partners about WikiLeaks’ robust redaction practices, alongside compelling attestations from whistleblower Daniel Ellsberg and torture victim Khalid El-Masri about the relevance of the material in exposing war crimes and extra-judicial rendition. We have been watching every day from roughly 11:00 to 17:00 (10:00 to 16:00 London time). (Here’s why we at EXB give a shit about the Assange trial.)

The third week covered the precise chronological history surrounding the release of the U.S. diplomatic cables, specifically the role of the Guardian in the accidental disclosure of the unredacted set. The Guardian has since issued a statement, confirming that the book contained the passphrase, but that they believed it “was temporary and would expire and be deleted in a matter of hours.”

Cassandra Fairbanks submitted chilling excerpts and transcripts of her conversations with Trump associates about what would be done to Assange and WikiLeaks collaborators. An audio recording of one of these phone calls, substantiating her claim, has previously been publicly released online.

Doctors described aspects of Assange’s mental and physical health. While there was disagreement about the severity of conditions and symptoms, overall they validated his experience of depression, suicidal ideation, auditory hallucinations, anxiety, and weight loss, especially over the last five years.

Two technical witnesses established that the leaked document archive Cryptome had published the full unredacted cables before WikiLeaks. The second technical witness also made a critical point about chat logs between Chelsea Manning and Nathaniel Frank: the ‘Frank’ persona chatting with Manning is merely assumed to have been Julian Assange since her court martial, though no clear evidence has ever been shown to prove that attribution.

The hearings are presided over by District Judge Vanessa Baraitser, herself supervised by Judge Emma Arbuthnot. The prosecution team representing the U.S. government is staffed by James Lewis QC, Clair Dobbin, and Joel Smith. The defence team representing Assange includes solicitor Gareth Pierce, barristers Mark Summers QC, Edward Fitzgerald QC, and Florence Iveson. A limited number of observers are allowed in the jury box and public gallery, but there is a secondary overflow courtroom.

Monday, Day Ten: “The computation effort would have been prohibitive.”

Grothoff spoke to the technical aspects of the Cablegate release in terms of security procedures and hosting. In response to distributed denial of service (DDoS) attacks during 2010, WikiLeaks acted to preserve the availability of the files by publishing instructions for third-parties to “mirror” their website. A small portion of these copies included “the encrypted archive of the cables.”

On August 25th 2011, the German newspaper Der Freitag not only pointed to the filename of the unredacted cables, but that the passphrase open disclosed: “Das für die Entschlüsselung der Datei notwendige Passwort lässt sich ebenfalls über das Internet recherchieren.” On August 31st, a blog post by Scottish journalist Nigel Parry made the connection to the Leigh / Harding book, which tipped off Young, who subsequently downloaded and shared the unredacted cables himself. “The weakest link in most computer systems is the human,” Grothoff observed.

He testified about meeting “together with Mr. Assange, with journalists from the Telegraph newspaper in their offices to prepare the research” for the ‘Gitmo Files‘, as part of “an ongoing partnership between a number of well established news organisations.”

Fairbanks testified about her interactions with German ambassador Richard Grenell and Arthur Schwartz, “an informal advisor to Donald Trump Jr.” She highlighted various angry calls with Schwartz, first on October 30th 2018, where “he repeatedly insisted that I stop advocating for WikiLeaks and Assange,” on the basis that he “knew very specific details about a future prosecution against Assange that were later made public.”

I responded that entering the embassy of a sovereign nation and kidnapping a political refugee would be an act of war, and he responded “not if they let us.”

On September 10th 2019, after Fairbanks tweeted that Grenell, a “likely candidate to take over the position” of national security advisor to Trump, “was involved in Assange’s arrest,” she received a call from Schwartz. He “informed me that in coordinating for Assange to be removed from the Embassy, Ambassador Grenell had done so on direct ‘orders from the President.'” She included a transcript of this call as an exhibit.

The testimony of mental health and medical professionals is relevant to the case in so much as Section 91 of the Extradition Act precludes extradition where “the physical or mental condition of the person is such that it would be unjust or oppressive.” Kopelman testified regarding Assange’s general psychiatric history and the severity of his depression, arguing that he has been at “very high risk of suicide” if extradition should become imminent. Various symptoms he recorded have previously been reported in the press. Assange has been reluctant to speak to prison staff during medical and psychological evaluations to avoid embarrassment, privacy violations, and further isolation. Kopelman regarded these fears as “rational” given the threats and treatment Assange experienced at the Ecuadorian Embassy.

Lewis criticised Kopelman for relying on reports from U.N. Special Rapporteur Nils Melzer, that Assange “would be exposed to a real risk of serious violations of his human rights, including his freedom of expression, his right to a fair trial and the prohibition of torture and other cruel, inhuman or degrading treatment or punishment.” Kopelman clarified that he had been alarmed by Melzer’s comments, but as a “political document,” it did not contribute to his psychiatric analysis.

Deeley agreed with Kopelman that Assange had a high suicide risk, aggravated by “intense preoccupation and rumination” about his circumstances, to a degree that is characteristic in those with autism spectrum disorder (ASD). He was concerned about the “interplay” between Asperger’s and depression that contributes to suicidal ideation, and had identified a familial disposition towards these traits.

For the most part, Fazel did not disagree with the diagnoses of the defence’s medical witness, though he argued that his conditions were “mild” enough to be manageable by prison mental health services.

Despite being a prosecution witness, the interactions between Fitzgerald and Fazel were noticeably more respectful than those between the prosecution and defence witnesses. Fazel conceded that isolation would remove opportunities to treat depressive episodes, and that long-term confinement could be a “major factor” in reducing Assange’s capacity to resist suicidal ideation. He admitted that he was not familiar with U.S. prison conditions and treatment facilities, and was testifying on the assumption that they were the same as U.K. prisons.

Excerpts from a written statement by clinical psychologist Dr. Kate Humphreys were read into the record. After performing tests on Assange to evaluate executive functioning and visuo-spatial skills, she found that he was performing far below optimal levels.

Thursday, Day Thirteen: “All the criteria for major depression.”

Like Fazel, Blackwood agreed with Kopelman’s diagnosis of depressive disorder, but believed in a more “sober” reading of prison counsel notes. He asserted that Assange “underplays his strength and resourcefulness.”

Blackwood similarly relied on the statements from Kromberg that U.S. and U.K. prisons were broadly equivalent. During cross-examination by Fitzgerald, he admitted that he didn’t know enough about U.S. prisons to make an independent determination, as he had only ever visited a state prison in Connecticut.

Crosby recounted her observations from four meetings with Assange in the last three years: October 2017, January 2018, February 2019, and January 2020. She had personally paid for all her own travel expenses to visit him in London.

Based on experience treating sufferers of psychological trauma, she concurred with Kopelman that Assange rarely revealed the full extent of his depression and suicidal ideation, out of fear that it would lead to further isolation and other punishments. When Lewis argued that Assange hadn’t been “confined” to the Ecuadorian Embassy, Crosby responded that this was “debatable.” She says that as of when she last saw him, he met “all the criteria for major depression.”

Crosby has previously filed an affidavit regarding the medical evaluation she conducted in February 2019. After leaving “the embassy temporarily to obtain some food,” she “returned to our meeting room and discovered that my confidential medical notes had been removed… Mr. Assange’s right to doctor-patient confidentiality was violated, and his confidential information had been breached.”

Butler confirmed that despite hosting “historical versions” of “WikiLeaks publications” on their platform, the U.S. government had not “attempted to have this data taken down.” This indicates selective prosecution.

Young confirmed that despite publishing “unredacted diplomatic cables on September 1, 2011 under the URL https://cryptome.org/z/z.7z,” still “no US law enforcement authority has notified me that this publication of the cables is illegal, consists or contributes to a crime in any way, nor have they asked for them to be removed.” This evidence was presented to show the selective prosecution process at play in the United States.

Friday, Day Fourteen: “In the interests of justice, Mr. Assange must be given sufficient time.”

The court discussed whether the witness reports from medical experts should be disclosed, redacted, or withheld in whole from the media. The final decision was postponed until Monday.

The defence asked for at least four weeks to complete the final written submissions, due to other upcoming professional obligations and difficulties consulting with Assange at the prison. The prosecution agreed that “in the interests of justice, Mr. Assange must be given sufficient time.” Judge Baraitser still thought this was unnecessary, and asked about the effect of the upcoming U.S. presidential election on the proceedings – implicitly acknowledging that there was a political element to the case.

He acknowledged that their article had hinted at the disclosure of the decryption passphrase and the accessibility of the encrypted cables from Daniel Domscheit-Berg. “I confirm the account in the article is correct; the purpose of the telephone call from Mr. Assange was as a result of what he had learned was the imminent publication in Der Freitag and as the article described… he ‘feared for the safety of informants.'”

Eller testified that he had never seen any evidence that the password hash Manning supposedly provided to Assange was cracked. Furthermore, even if it had been cracked, “the indictment’s assertion that Manning hoped to gain anonymity or was trying to access information that she did not already have authorization to access is a weak one, as she already had authorized access which she used to download the above datasets.” The judge seemed surprised to hear that “probably millions” of people, including Manning, had such access to SIPRNet, the U.S. Defense and State Department system for transmitting classified information.

When asked whether the Jabber account ‘Nathaniel Frank’ had been definitively attributed to Assange, Eller replied that it had just been “assumed” all this time. Notably, the prosecution did not contest this small but significant takedown of a core allegation.

Join us next week for further coverage of Assange’s extradition trial.