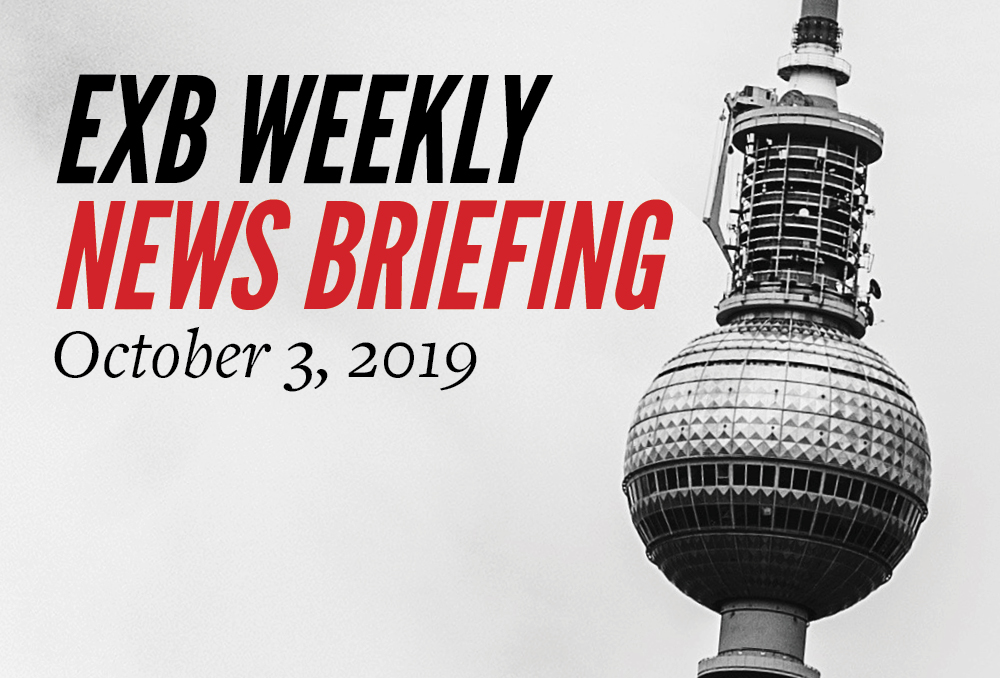 Record-breaking feats 10 world records were broken at the Berlin Marathon this Sunday, although none were big-hitters like fastest marathon time (which was broken in the same race by Kenyan Eliud Kipchoge last year). Instead, 2019 saw the achievement of far more specific feats, like “fastest marathon in a toga” by Finland’s Valtteri Arstila, “fastest marathon backwards on inline skates” by Estonia’s Tõnis Paalme, and “most T-shirts worn during a marathon”, with Frankfurter Daniel Trienens’ 25-layer top.

Fire Causes Travel Chaos A fire that destroyed cables affecting the U1 and U3 U-Bahn lines has caused travel choas this week, and it is likely to continue. The damage was caused after flames spread from a bush that was set alight near Zossendorfer Brücke on Tuesday. Repairs are being carried out but are planned to take several days. A replacement bus service is running between Nollendorfplatz und Kottbusser Tor, but the BVG are simply advising people avoid the routes until further notice.

Climate “state of emergency” After hundreds of thousands of Berliners participated in climate strikes last month it seems climate politics in the Hauptstadt is getting even hotter. Berlin’s local government will discuss whether to declare a state of emergency after a 36,500 signature petition called for the drastic measure. Public initiative Klimanotstand claim it is necessary to meet the targets set out in the Paris climate change agreement. Given that Berlin already lags behind Cologne, Düsseldorf and even Potsdam, we’re glad this topic is moving from the streets and into the hands of politicians – even if they can take up to four months to think about it.

Giant train ticket with plaits, anyone? If you travelled on the S-Bahn this week, you might have noticed some particularly odd stowaways – life-sized cardboard cut outs of a man with blonde plaits. Well, grab one while you can! The cut outs, actually the image of Köpenick rapper Romano, act as valid S-Bahn tickets and are being handed out to promote his upcoming concert at S-Bahn Werk Schöneweide. The cut outs will be dotted around S-Bahn trains until Oct 8. Certainly more awkward than the standard ticket, but, well, free is free.

Don’t piss off a cheerleader Cheerleading, it’s a sport right? Well not according to Alba, Berlin’s national division basketball team, who have announced their cheerleaders Alba Dancers will no longer perform during match breaks. The team’s director said the decision was taken because of the perceived inequality between male players and female “entertainers”, effectively denying cheerleading’s status as a credible sport. Local sports clubs like Füchse Berlin and BR Volleys have already decried the decision, while supporters of the cheerleaders also showed solidarity on social media with the hashtag #deeplychauvinistic. Good luck trying to get out of this one Alba.

Great escape… nearly A notorious criminal, known nationally as Maskenmann because he wore a beekeeper mask while committing his crimes, orchestrated a dramatic escape from his Berlin prison cell on Monday morning. Maskenmann, who is serving a life sentence at Tegel’s Justizvollzugsanstalt for crimes including abduction, assault and extortion, used chemicals to burn through the bars of his cell window before scaling down from the third floor of the building with a rope – unfortunately for Maskenmann he was caught before he made it to the ground.