Berliners’ fascination with Americana and country music ain’t what it used to be. But there’s a holdout of redneck culture in the suburbs: the American Western Saloon. Rachel Glassberg went for a visit and gave line dancing a try.

There’s a certain perverse pleasure we US expats get out of seeing our culture exoticised, exaggerated and not-so-accurately simulated by Germans. Who among us hasn’t gawked at the caramel popcorn yogurt and barbecue noodles offered during “America Week” at Lidl, or contemplated eating burgers and schnitzel under portraits of Elvis and Marilyn at Mitte’s Route 66 Diner? But this uncanny valley of Deutsch-Americana is shrinking, at least in Berlin. The city’s biggest celebration of “America”, the kitschy German-American Volksfest, was called off in 2016 for the first time in its 55-year history, officially due to a lack of space. With that off the table, we decided to journey to the Wild Northwest – Reinickendorf, to be exact. There, in the half-barren Märkisches Viertel, Berliner Frank Lange has been indulging his obsession with the USA for over two decades, complete with country music, €4.50 bottles of Coors Lite and line dancing four nights a week. Say howdy to the American Western Saloon. 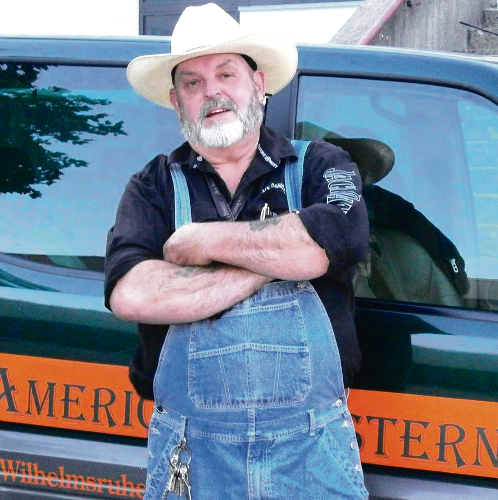 “Franky” is a lifelong Reinickendorfer, born in 1956 when the neighbourhood was still governed by France; he speaks French and English but is most comfortable in his native Berlinerisch. His fascination with America sprang mainly from romanticised European depictions of it, like Bud Spencer’s spaghetti Westerns and the Wild West tales of German author Karl May, who famously never set foot in the States until a few years before his death.

When he wasn’t vacationing in Florida, Tennessee or Arizona, Lange spent early adulthood like any red-blooded American man: working as a truck driver and playing in a Creedence Clearwater Revival cover band. In 1994, he opened the first version of his Western Saloon in Ollenhauer Straße. Six years later, it moved to the nearby Fontane Haus cultural centre, where the bar, restaurant and venue has remained more or less unchanged since.

There are several homages to the American West in and around Berlin, like Spandau’s “Old Texas Town” and the popular El Dorado theme park in Brandenburg, but Lange’s is the only one to take an earnest stab at actual 21st-century redneckery. Bras, panties and stuffed chickens hang from the ceiling alongside cowboy boots and a mirror-plated 10-gallon hat. A wall-mounted LED displays the bar’s official slogan: “Our beers are as cold as your ex-wife!”1 The 14-page menu offers 335g burgers, “Brokeback Mountain” salad and the aforementioned Coors (the cheap alternative is the house “Moose Beer”, actually a bog-standard pilsner brewed by Wolters). It also serves as an almanac of truly heinous Denglish humour (“Onion rings = Zwiebel ruft an”) and advertises t-shirts printed with the phrase “I pee on toilet seats.”

The only thing missing is a Confederate flag, and in fact, a giant one used to fly from the roof of the saloon’s predecessor in Ollenhauer Straße. “Until a couple of black guys walked in and asked if I was a Nazi or something,” Lange recalls. “But here in Germany, the ‘rebel flag’ doesn’t have anything to do with Nazism or hating foreigners. It’s just a lifestyle thing.” Granted, those attracted to that lifestyle tend to share certain sentiments, and it’s probably no accident that Berlin’s “Western” restaurants and attractions are located in its most conservative neighbourhoods. Reinickendorf, for example, had one of the highest proportions of right-wing voters in last month’s state elections.

Tonight’s short on Confederate flags – or cowboys at all, for that matter. We’re here for the line dancing, of course, although if we’d come on a Saturday we could’ve caught a show by country-Schlager superstar Larry Schuba2. Tonight’s instructor is Natalie Redlitz, a 29-year-old radiologist who caught the line dancing bug at age 11 and boasts several world championship titles as a member of the Berlin-based dance club In Cahoots. To our group of seven, she patiently demonstrates the choreography to “Boot Scootin’ Boogie”: three steps, 24 bars, repeat for the song’s duration or until your last shred of dignity has vanished. As we stumble over our own feet and Brooks & Dunn sing “Heel, toe, do-sido” for what feels like the 50th time, the lone man in the group flashes us a helpless “I’ve been dragged here by my wife” kind of look.

The rest of the participants are 40- and 50-something nurses, teachers and business consultants, and when we ask them why they’re here we keep getting the same answer: “Because you don’t need a partner to dance.” Rather than the anticipated peek into Germany’s Western subculture, we’re getting an unvarnished look at life as a single, middle-aged woman in suburban Berlin. “Ten years ago, there were lots of people showing up in cowboy hats and boots,” Redlitz tells us when we express our puzzlement. “Now it’s women who come here on their own to make friends, have fun… The music’s getting more modern, too. It’s not just country anymore.”

Sure enough, as the night progresses from “beginner” to “advanced” and the group swells to about 10, the music switches over to an electro cover of “Oh, Susanna!”, then to Red One’s “Don’t You Need Somebody”. We do see one cowboy-hatted German scooting his boots to the latter. Michael Künne is a salesman and recreational horse rider who also attends country meetups in Pullman City, the 200,000sqm Westernstadt in Harz, Bavaria. He started line dancing here seven years ago and enjoys it, even though, he says, “I’ve met real cowboys in America, and they’ve barely even heard of it.”

Hobbyists like Künne are an exception at the Western Saloon these days, Lange sighs. “Ten, 15 years ago, they were everywhere, but now when someone like him comes in, it’s exotic.” He’s on the patio with his friend Lars Bethke, a country DJ and  longtime regular, discussing the future of German country music. “It’s dying out,” Lange says3. “The only ones left are dinosaurs. Larry Schuba is how old, 65? How many more years does he have?” Is it because Americans just aren’t as fascinating anymore? Bethke, who grew up in Steglitz, thinks so. “I remember going out to the GI clubs, the ones where you could only pay in dollars and they only served American beer. They were playing all these country records I’d never heard before – you couldn’t buy them anywhere in Germany, but somehow they were here. It was like entering another world. But now all you’ve got to do is go on Youtube…” The increasing number of Berlin bars and restaurants owned by actual US expats hasn’t escaped Lange’s notice, but he has never been to White Trash Fast Food or The Bird. “They don’t have a parking lot, and I’m not much of a walker,” he says. Spoken like a true American.

One reliable highlight of Lange’s year, at least, remains the Country Music Meeting, a weekend-long annual gathering of German and international country and Western enthusiasts that takes over the entire Fontane Haus. The next one is February 3-5, and he hands us a flyer for it. On the back are lyrics to a song Irish musician Padraic “Tiny” McNeela composed for the occasion:

“You can sip Jack Daniels whisky, wear a hat like Daniel Boone

And if ya wanna ‘sit a spell’, hit the Western Saloon

We’re off to get some chicken wings, and a nice cold big Moose beer

1. Lange’s own ex-wife’s name is Heike, and he thanks her quite warmly in the liner notes to the 2016 compilation CD AWeSome 15 Years at the American Western Saloon.

3. “Like print magazines,” Lange adds later, poking the copy of Exberliner we gave him.