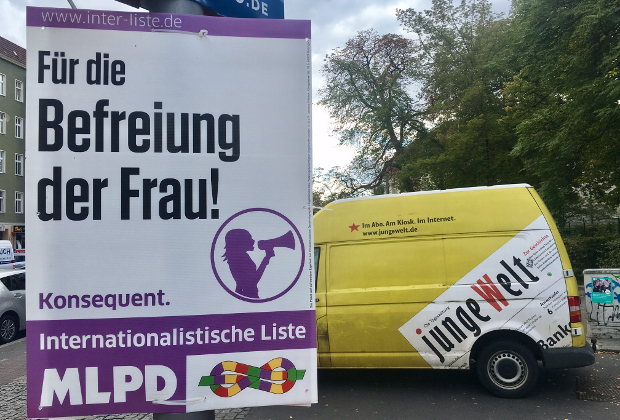 Die Linke just not left enough for you? These guys have been part of the Berlin Senat from 2001 to 2011 (until 2007 under the name PDS/WASG), and then again since 2016, and in this time they have been responsible for privatizations, low wages, rising rents, and deportations. They’re certainly not left-wing enough for me. We recently looked at nine small parties that are definitely left of the dial. But there are at least three even-more-left-wing parties for you to choose from. Here are three different communist parties are on the ballot:

Founded in 1968 to replace the prohibited Kommunistische Partei Deutschlands (KPD), the DKP served for two decades as a kind of diplomatic representation of East Germany in the West. The SED had subsidized its sister party with 50 to 70 million marks per year. So when the “workers’ and peasants state” collapsed, the DKP did too.

Now the party has several thousand mostly gray-haired members and is rife with factions. But in Berlin they have rejuvenated somewhat via protests against Nazis and rising rents. The DKP is using a harmless-sounding, three-word election slogan: “peace, jobs and solidarity”. In the best pro-Soviet tradition, their focus is on “peace with Russia”.

Spitzenkandidat in Berlin: Stefan Natke, a leader of the party

The most Stalin-friendly of Germany’s radical left parties, the MLPD is also a product of 1968. Thousands of radical students back then joined Maoist sects and went into the factories – the MLPD is what remains of West Germany’s once-powerful K-Gruppen. Now about the same size as their arch-enemies from the “revisionist” DKP, the MLPD has a high proportion of industrial workers. They also receive the largest private donations of any party in Germany, bar none – apparently the millions of euros come from the inheritances of normal workers.

Their eternal party chairman Stefan Engel just handed over power to his daughter Gabi Fechtner – a bit like they do it in North Korea. They are running as an “Internationalist List” together with Stalinist organizations from the Middle East, and their main focus will be the “mafia-like monopoly in the automobile industry”. That, I like.

Spitzenkandidat in Berlin: Andrew Schlüter, a former worker and leader of the party

Going for Trotsky instead of Stalin, the SGP is by far the smallest group on this list – probably just a few dozen members across the country. They are famous for their years-long campaign against Jörg Baberowski, a right-wing history professor at Humboldt University who is famous for his claim that “Hitler wasn’t cruel”. (Since he sued his critics, and lost, we can now safely say that Baberowski is a right-wing extremist.)

Uniquely on the left, the SGP is virulently opposed to trade unions – they want workers to leave the unions and join the SGP instead. They are running a campaign against Google for trying to censor their website and their candidates skew, more than any other left-wing party, quite male, white and old. It seems like their leader, David North, is also the CEO of a printing company – a strange choice of profession for a communist leader. They currently want for us to “vote against war and militarism”.

I don’t think I’ll vote for any of these parties, I’m too left.