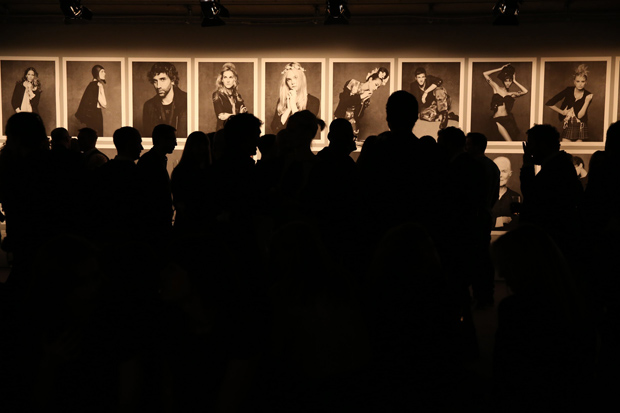 Underneath Leipziger Platz in the Postdamer Platz S+U Bahnhof, the sophisticated photography of fashion’s most recognisable celeb, Karl Lagerfeld, has set up camp amidst hurried commuters, clueless tourists, happy drunks and a certain de rigueur smell of piss – all in all not a bad setting for connoisseurs of contrasts and Karl certainly is one. Chanel’s iconic head designer teamed up with Parisian Vogue’s ex-editor-in-chief and stylist Carine Roitfeld and published **The Little Black Jacket: Chanel’s Classic Revisited**, a lavish homage to Coco Chanel’s creation, a nonchalant collarless cardigan jacket she launched in the mid-1920s. The Postdamer Platz exhibition is the urban, pop-up equivalent of the coffee table book.

Opened a week ago to an assembly of 10,000 ‘special guests’, including our gregarious Mayor, Klaus Wowereit – who never misses a red carpet event – and king Lagerfeld himself, arm in arm with one of his (many) favourite muses, the French model Laetitia Casta. The exhibition will stay for another two weeks in Berlin, after London, Paris and Moscow – and before heading to Hong Kong, Tokyo and New York next year. Expect 113 large black and white portraits of female (and male) celebrities wearing Coco’s trademark black jacket, each time styled in a unique – and arguably exciting – way by Roitfeld, arranged around a large pitch black rectangular space with dramatic lighting.

Lagerfeld succeeds, at least in the moment, in saying that some things never go out of style, while retaining the trademarks of each celebrity – whether it is the back of Anna Wintour’s perfectly-defined bob, Yoko Ono’s odd dance moves, Tilda Swinton’s haunting demeanour, a soave Kanye West, or a queen-like (literally crowned) Sarah Jessica Parker. The little black jacket has been expertly styled for each VIP shoot: with a cape, a belt, a bandeau and maternity wear, worn short, bra-length, long with a sailor shirt, sluttish, open over balconette bra with thigh-length boots, worn with African patterns or on the top of Sarah Jessica’s head… It’s playful, they’re beautiful, we’re in awe. The fashion-savvy will appreciate.

Others can play spot the celebrity (is that really Claudia Schiffer?) while, arguably being confronted with the original ‘little jacket’ for the first time – an item only accessible to the world’s deep-pocketed fashionistas. Meanwhile one can’t repress a feeling of deja vu: The ‘little black jacket’ has become a cliché of contemporary street and classic wear alike – wear it on distressed or skinny jeans or over a chic little black dress – a timelessness that pays tribute to Coco Chanel’s flair and genius in creating what was still to be considered a must-have for many women around the world, regardless of age, class or style, almost nine decades later.

With the 100+ of the world’s most stunning models, actors or creative minds all looking back at you, one can’t help but feel a little intimidated. Lagerfeld is a firm believer in the dwindling notion of the idolised and untouchable celebrity. Celebrities are better people because they are celebrities.

Remember to grab a free poster on the way out. Put it on your wall. Dream on!