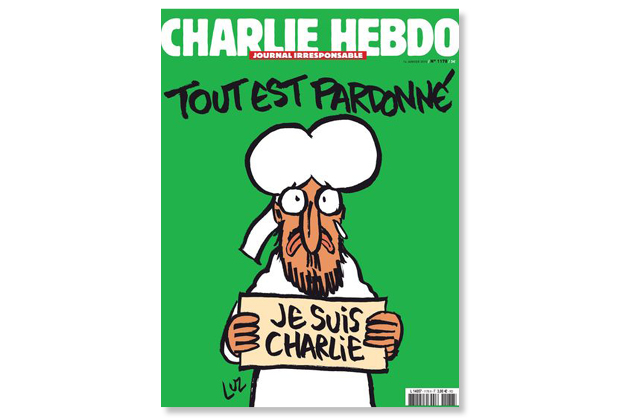 Charlie Hebdo’s “survivors” issue, its first since last week’s massacre, will hit Berlin kiosks on Saturday for €4. Its Muhammad cartoon cover already sparked controversy and boycotts in the Muslim world as well as the US and UK – but not in Germany. Here’s our preview.

The first post-massacre “survivors” issue of Charlie Hebdo will hit Berlin kiosks on Saturday as part of a special edition set to be distributed in 16 countries and made available as a PDF in in four other languages: Arabic, English, Turkish and Spanish. Dated January 14, the issue was produced in the Paris office of French daily newspaper Libération, where the surviving members of the team found shelter after the attack. Released in France yesterday, it was a huge success and sold out within hours, prompting the decision to print another two million copies (on top of a planned three million; their circulation before the attack was 60,000) to meet the demand.

Presse Vertrieb Berlin, the press distributor for eastern Berlin, said they ordered “as many as we could” – 1000 copies. They expect to get “at least half of it” by Saturday and the rest in several instalments over the following days.

Berlin newsagents confirmed they had many requests but had to decline taking pre-orders or reservations, saying they didn’t know how many they would get.

In Germany, there were no signs of restriction in terms of distribution. Quite the contrary, despite threats from radical Islamists and international controversies about whether one should endorse the controversial cartoon on the cover: the prophet Muhammad holding a sign that says “Je suis Charlie” beneath the caption “Everything’s forgiven!”

Too controversial to publish?

Praised by most French media outlets for striking the right note – not giving in to the Islamist terrorists, yet refraining from the usual bawdy, incendiary tone of their anti-religious jokes with a rather moderate, conciliatory message to Muslims, whom they clearly differentiate from the perpetrators – the cartoon has proven much more controversial elsewhere, and not just in Muslim countries. The Turkish government blocked several websites publishing the new cover – just days after prime minister Ahmet Davutoglu took part in the solidarity march in Paris.

Many mainstream English-language media refused to reprint the cover, foremost in the US, where religious satire is a quasi-taboo, and in the UK, where a radical Muslim preacher called the illustration an “act of war” and warned against selling the French satirical magazine. Some press distributors announced they wouldn’t carry Charlie Hedbo in their networks. Liberal-left gospel The Guardian ran a thumbnail-sized image of the cover on its website with the disclaimer: “This article contains the image of the magazine cover, which some may find offensive.” The New York Times announced they wouldn’t publish the “offensive” image at all, yet the paper’s online article about the new issue of Charlie Hebdo linked to the website of Libération displaying the cover. AP as well as CNN and CBS also censored the cartoon. As noted by various columnists, the French satirical magazine is not hot property among US newsagents and booksellers. Don’t expect to buy a copy at bookseller Barnes & Noble, they announced they never did and would not carry Charlie Hebdo.

Meanwhile, Germany has adopted a more liberal approach. Many Berlin papers, from BZ to taz, to Süddeutsche Zeitung, reprinted the magazine’s controversial cartoons after the attack last week, and those that have reproduced the latest Mohammed cover include Der Spiegel and Frankfurter Allgemeine Zeitung (both of which used the image on their websites), Frankfurter Rundschau (which published the image on its front page) and leftist taz (which devoted its entire cover to Charlie Hebdo). The cartoon was even featured on the Berliner Fenster displays in the U-Bahn on January 14. 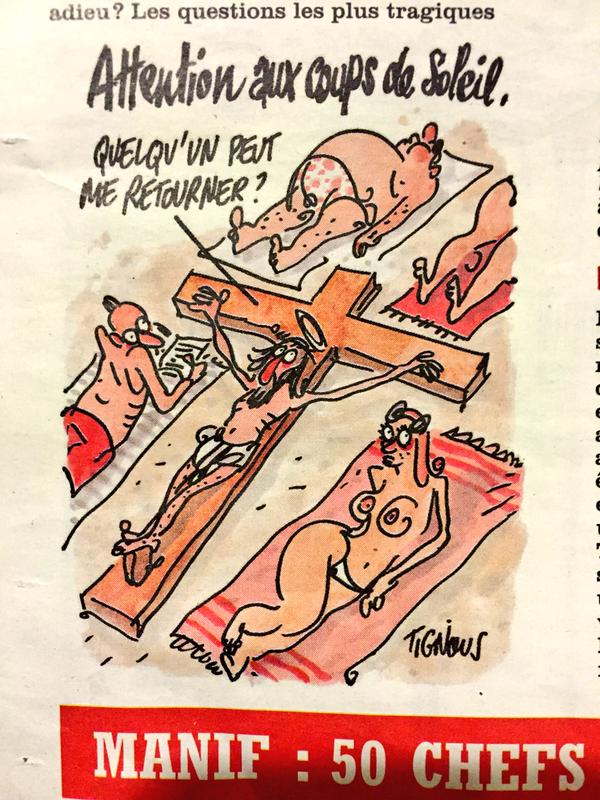 Besides the cover, there are no depictions of Muhammad to be found in the new edition of Charlie Hebdo. Arguably, the most offensively anti-religious satire in it isn’t directed at Muslims. It is a cartoon (above) depicting Jesus Christ on the cross lying on a busy beach asking for volunteers to “turn him around” – with a caption warning about sunburn. 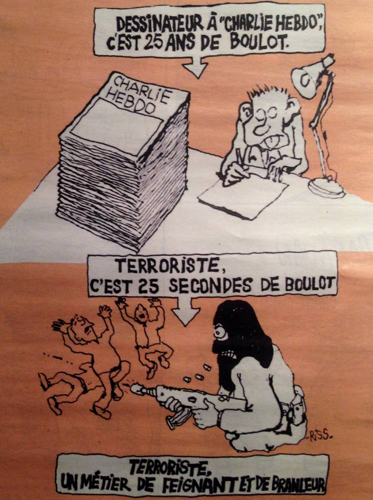 The eight pages (instead of the normal 16) read like a tribute to the dead contributors with drawings by Wolinski, Charb, Tignous and Honoré, and texts by Bernard Maris and Elsa Caya, all killed in the attack. A two-page sketch by the famous cartoonist Cabu, also a victim of the massacre, pokes fun at Islamists, comparing their jihad trip to Syria to an Erasmus exchange. Another cartoon by Riss (above), wounded in the attack, shows a Charlie cartoonist slaving away at his desk and a terrorist shooting at people, comparing their respective professions: “To be a Charlie cartoonist, it’s a 25-year career. Terrorist is a 25-second job.”  Underneath the slogan: “Terrorist, a job for slackers and wankers.” 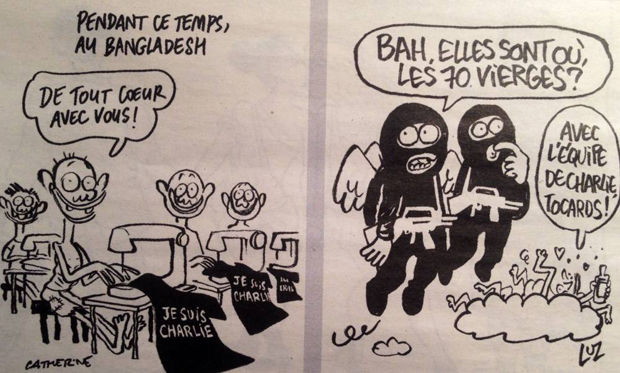 Luz, who drew the new cover, also features on the back page with a cartoon (above) showing two Islamist terrorists (complete with machine-guns and balaclavas) in heaven asking disappointedly, “Where are our 70 virgins?” “With the Charlie team, morons!” answers a gang of partiers enjoying afterlife in a cloud filled with sex and alcohol….