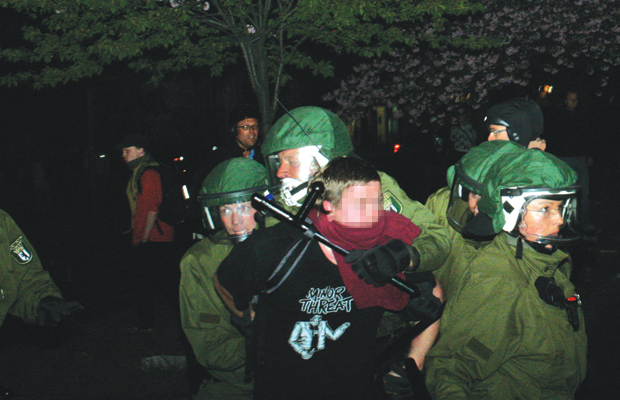 The extreme violence and vandalism surrounding the eviction of the Liebig14 squatters in January could mean that this year’s May 1 Kreuzberg demo will be more brutal than ever.

For a week in January the streets of northern Friedrichshain were littered with shards of glass reflecting the flashing blue lights of cop cars. The residents of one of the last remaining squat houses in Berlin, Liebig14, were forcibly evicted, triggering a protest that reached unprecedented levels of violence.

It took 2500 police to clear a single building that day. Once inside – after five hours breaking down a door barricaded with trash, barbed wire and steel bars – the cops were welcomed by Pippi Longstocking-style traps, like a mysterious arrangement of five bathtubs filled with a red liquid and connected to electrical cables.

The rest of the police force was busy all day and night, trying to pacify a wild mob that smashed up banks, shops and bus-stops, not only in Friedrichshain but throughout the city, allegedly causing €1 million of damage.

“These actions were right and good,” an anonymous participant wrote on Indymedia after the demos. While the increase of leftist violence in Berlin may be partially due to the faddish appeal of burning cars, the protests around the eviction of Liebig14 have shown there is a new spirit of mobilization among rioters – and it’s one that stretches beyond the usual suspects.

With May 1 at the doorstep, the question lies at hand: will this year’s riot make the last couple of May Days look like a day at the beach?

“I was shocked when I saw the protests against the Liebig14 eviction,” says a guy who introduces himself as Jonas Schiesser. The 29-year-old wears a baseball cap pushed back to his neck and a Kreuzberg 36Boys baseball jacket. Sipping a latte at a Turkish café at Kotti, he doesn’t lower his voice when he speaks; he has nothing to hide, at least not here. He is part of the leftist scene in Berlin, he says, and actively involved in the planning of the Revolutionärer 1. Mai demonstration, the massive ritualized May Day demo in Kreuzberg that always erupts into street fighting between police and anarchos by sundown.

To Schiesser, something of an expert in such things, much of the Liebig14 vandalism didn’t seem that spontaneous at all, but rather planned. Who was behind it? “I have absolutely no idea,” he said.

Even among those on the ultra-left, pinpointing the source of rising aggression is difficult. The number of active extreme leftists has shown only slow growth in the last several years, but the number of violent crimes (arson, assault and breach of peace) attributed to left-wing extremism has risen substantially. There were 1115 offenses in Germany in 2009 – that’s 400 more than the year before. And Berlin has seen a staggering 400 percent increase from 54 to 215.

There seems to be a lot of potential for aggression out there that isn’t being attributed to any particular radical group. There were appeals on the internet to use violence against the police force before the eviction, recommendations to use sling shots and certain kinds of ammunition to cause maximum harm. Even the use of laser pointers to distract the helicopters was encouraged. The police officially deny that they are readying themselves for these sorts of threats this May Day.

Off with his head

Violence, or ‘militancy’, is highly debated within the leftist scene itself, but the May Day groups all pretty much agree it should exist in some form: “The capitalist system cannot be overcome with the participatory means democracy offers,” Schiesser says. It’s always been like that, he adds. “Think of the king’s head that had to roll for the French revolution to be successful.”

As an example of the opposite tack and its futility, he points to the Volksentscheid that couldn’t stop Mediaspree. Also, in the leftist view, violence is brought into the game by the system itself: socio-economically, with the failure of the social net to combat poverty, and at demos, in the way the police confront protesters.

Following this line of reasoning, some years the Revolutionärer 1. Mai demo is more violent than others due to escalating social problems. In 2009, at the peak of the financial crisis, 479 members of the police were injured at the demo, yet the count went down to 95 in 2010 – and of course, if you ask Schiesser, the police are first and foremost to blame.

Rise of the riot Polizei

“Their strategy got so much more aggressive,” Schiesser says, recalling the image of a May 1 he knew 10 years ago where the police were on one side of the street and protesters on the other. The situation was calculable, the force of water cannons harsh but predictable. These days the police operate with small units that go directly into the crowd. They wear body armor. They are fast and highly aggressive.

Schiesser explains how every year, leftist groups from the Antifa to Arab associations try to inject their demos with content, addressing topics that proved to be important over the past year. For the 15th anniversary of the demonstration, it’s the migrants in the Mediterranean, Sarrazin’s contribution to the integration debate, gentrification and the drastic increase in rental prices, and – something they actually have in common with Chancellor Merkel since the disaster in Japan – the newly revived anti-nuclear power discussion.

Spontaneous participation by passersby who stumble into a demo is not only welcome, says Schiesser, but is a traditional part of May 1. He gives the example of when the inhabitants of St. Elisabeth-Stift retirement home went on a looting spree on May Day, 1987. Or the Turkish community that joined demonstrators to protest their ghetto-like living conditions here in Kreuzberg.

Schiesser and his fellow revolutionaries want ‘real’ people to get involved and express their rage about social problems, and not people who just enjoy violence. Referring to the street fair set up by the police in Kreuzberg on May Day, Schiesser says, “Myfest has become Berlin’s Oktoberfest full of drunk macho men who are racist, rude towards women, and simply not fun to be around.”

If you were there last year, you’ve seen how the hills of Görlitzer Park became a grandstand for the party crowd to watch the revolution spectacle with phone cameras and chilled beers in hand. Lately, it is hard to tell if May 1 in Kreuzberg is actually a political event or just a spectator sport. A lot of thrill-seeking kids travel from all over Germany explicitly for a little riotous fun.

How do the organizers deal with the ‘tourists’? Schiesser shrugs: “It’s an occasion where we can raise awareness beyond our usual interest groups.” He claims that with over 10,000 participants, their demo has proven to be more significant in previous years than the traditional May Day demonstrations by the unions.

But he does concede a problem: “So far, there is still no broad social movement behind our ideals for the rest of the year.” But he’s convinced there’s hope for the day yet. “As social problems grow bigger,” he says, “Revolutionärer 1. Mai will become more and more political and less a day for Charlottenburger high school kids to make party videos.”

There is already evidence that the Liebig14 riot could have been just a taste of what’s to come on May 1. Recently, leaflets were distributed in Kreuzberg 36 reading: “1. Mai Tage des Zorns – Wir machen’s Nordafrika nach.” “May 1, day of wrath – we’re gonna copy North Africa”.