Our reporter faces off against casual park players and national ping pong champions alike in an attempt to unlock the secrets of Berlin’s obsession with Tischtennis.

One of the more ubiquitous symbols of Berlin – along with graffiti, the Spätkauf, parks, bears, Ampelmänner, broken glass and dog shit – is the ping pong table. Wherever there is open space, a park or an extra piece of pavement, you’ll find one: sturdy, cold, narrow concrete with a metal net. Open to the elements, free to use, enticing, seductive. A place to exercise, socialise, drink, chat, or engage in an almost silent combat; a place to make friends or to lose them. But how did these tables get there? Why are they so popular? Why do Germans run in circles around them? Also, given that they are omnipresent and free-of-charge, can Germany become the World Ping Pong Power? Finally, as the proud owner of a table tennis trophy, won at a school fête at the tender age of 11, where do I slot in among all this pong? 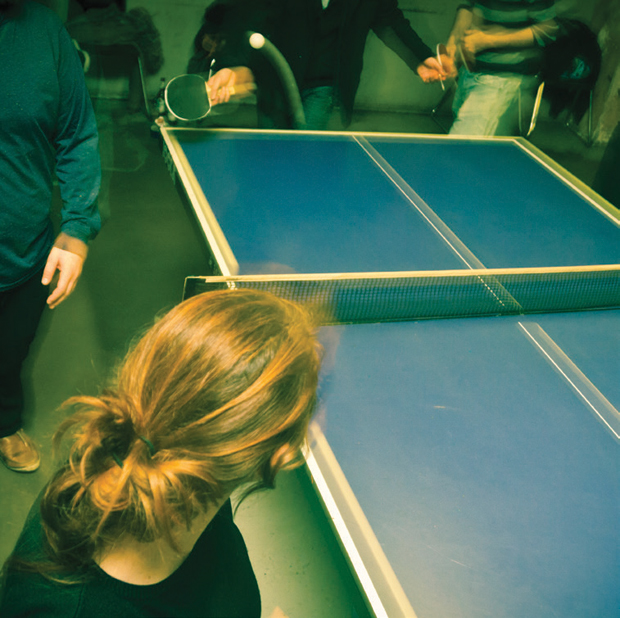 Pong for the people

Peter Ulrich, Berlin-based web designer and maker of www.pingpongmap.net, believes our city to be the “capital of hobby table tennis”. On his site, you can locate public tables and look upon them while you consider – is this the right Platte for me? Yes? Go there. The site’s users have pinpointed tables all around the world, but for now, whether you can play in Poznan or not is irrelevant. What is important is that, according to Ulrich, there are at least 1000 Tischtennis sites in Berlin alone, and with often at least two tables at each site, well, my maths is weak, be my guest.

There are at least 1000 Tischtennis sites in Berlin. ‘Children grew up with ping pong on both sides of the Wall.’

They seem to be fairly evenly distributed over the city. Considering the link between ping pong and socialist regimes such as China (see ‘ping pong diplomacy’ before Nixon’s Beijing visit in 1972) and Cuba (Fidel Castro is even said to have been inspired by the game to launch the revolution), I had expected there to be more in the former East. I had also heard a rumour that East Berliners congregated around the ping pong tables because they were a safe place to talk. Felix Müller of the Stasi Museum says that while it’s true “they have found no evidence of microphones in the tables”, the “trees around the tables may have contained them” – so much for the notion of the sport as a bubble of freedom. San Francisco-born Oliver Miller, longtime Berlin resident and owner of table tennis bar Dr. Pong, acknowledges ping pong’s popularity in the GDR may have been down to its need to keep its people “active and occupied within simple means,” but also notes that “the sport was equally popular in both East and West. Children grew up with it in the schoolyards on both sides.” So the tables are simply there.

They were built and the people came. Kids know the tables from an early age. As Alexander Teichmann, president of the nationally recognised TTC Berlin Eastside table tennis club, puts it: “It’s like sex. Every Berliner has done it at least once in their lives.” Entry-level bats and balls are cheap, so pretty much anyone can play. Plus, according to Ulrich, “Berliners like to be outside, have a cheap beer – and with an activity, it’s better.” And you can take it as seriously as you like. Some take it very seriously indeed. 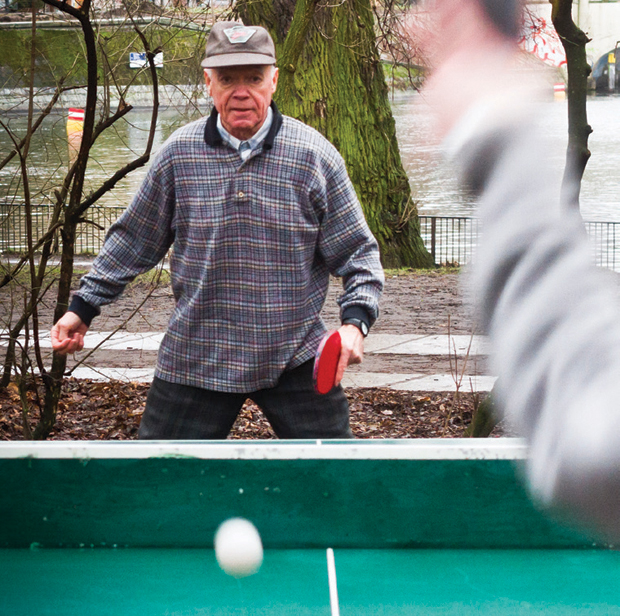 Pong in the park (or in the dark)

In the southeastern corner of Kreuzberg lie two green metal tables in a clearing relatively sheltered from the elements. A group of (mainly) men play there every afternoon of the week. They seem to own these tables, freezing out anyone who doesn’t play at a high level. I want to enter their circle, face my fears.

Steven, a regular from the UK who has lived in Berlin for the past 30 years, has been playing with this group for about a year. He says he was intimidated at first, but that a 71-year-old man called Günther trained him up, that Günther is the reason – other than the location and the metal tables – that these players come here from all over the city. Steven himself travels an hour each way from Charlottenburg. He tells me that Günther works on your game without giving any verbal instruction. He’s able to play down to any level, staying just ahead of his pupils and making them reach, bit by bit, up to his standard.

With this in mind, the next day I am back, to get coached by Günther. It’s exactly as Steven said it would be. Günther quietly hits the ball back to me, his right hand in his pocket. He works on my forehand, then my backhand, and teaches me about positioning by punishing me for leaving areas of the table open. He stands back by the trees and feeds me high balls to smash. I miss a lot of them, but he doesn’t seem to mind. Later I see one of the younger men smash the ball back at Günther 20 or 30 times, and each time the ball sails back to his side of the table; there’s no way past, and Günther is singing.

He gives me a good session, flinging me from side to side until I’m drenched in sweat. “Schön,” is one of the few things he says to me in one of my rare moments of grace.

Günther gives me a good session, flinging me from side to side until I’m drenched in sweat.

Of course, not every outdoor table is the nucleus of a tight-knit community of pong-lovers centred around a veteran who trains you up before you can play. Most of the time, your public ping pong experience will include the appearance of beer-toting strangers who want to replace your fun with a more locally flavoured version which involves running around and around the table until only two players are left. This is Rundlauf, or, in East German slang, “chinesisch” (I’m not sure why this is, having lived in China and never seen any Rundlauf-ing). And this happens nightly at Dr. Pong, a smoky, graffiti-covered dive bar in Prenzlauer Berg. In 2004, Miller was among the first in Berlin to bring the city’s two great loves, partying and table tennis, together in one place. There have since been copycats – most recently, Grießmühle’s Pong Club, where techno DJs underscore the Rundlauf – but this is the original, open seven nights a week.

There are no events, and people come to play there freely. Coming up with the idea for the bar while playing on the public tables, Miller wanted it to be a “true representation of what happens outside”. And it is. There are regulars here who take the game seriously, and it’s they who normally end up competing in the final. Several times I fall just short of the deciding match, then I make it and beat one of them. I am a champion. I am 11 again. But there are also the wasted, the blind drunk who mill around the table blinking at their bats. One man tries to serve and misses the ball completely. Gott verdammt! He will never make it to the Olympics.

Pong with the pros

Irina Palina, on the other hand, has made it there five times – four as a player for the Russian national team, and once as their coach. Palina, originally from Moscow, now coaches the TTC Berlin Eastside women’s team. After a stint playing in Hungary, she was transferred to Eastside when they were promoted to the Bundesliga in 1998. And since getting there, they’ve stayed there. Last year, with Palina coaching them, the women won the Triple Crown: German Cup, German League, and European Champion’s League. No team in Europe has ever done this before.

Unfortunately, neither Dr. Pong nor Berlin’s thousands of free, public tables are a breeding ground for an army of potential world-beaters. And neither is Eastside’s training complex – where I watched children whose chins just about clear the table whack balls at each other, and national over-40 champion Axel Berger school another man in the art of pong. So far, no player on TTC Berlin Eastside’s Bundesliga team has actually come up through the club. Currently, the team’s two most promising members members hail from Hungary (Georgina Pota, the number one player in Germany) and China (Shan Xiaona, number two).

“The Bundesliga is like the English Premiership,” Irina tells me. Players come in from elsewhere, get moved around, and those good enough for the national team, would need to hone their skills at the national training centre in Düsseldorf. The likelihood of a talented Berlin kid rising up through the club to the Bundesliga is slim.

This is not the only problem. Kids need to start early, and practice hard and often. Asian players might have devoted themselves to becoming professional by age 11 or 12. But in Berlin, Irina coaches the children twice a week, maybe three times if she can convince a particularly talented wunderkind to come more often. “There are so many things to do here. They have other hobbies, swimming lessons, study… and – how to say this? – some parents say, ‘My kid practices too much, my kid is too tired.’ Well,” she smiles and shrugs, “I think it’s okay if they’re tired!”

But there is hope. Despite there being fewer than 10 girls who currently train at the club, two of them – including Palina’s 13-year-old daughter Liliana – have just qualified for the German National Under-15 Championships. Potentially, if they keep improving, they could be the first to come all the way up through the club into the Bundesliga. “It’s very difficult,” says Irina, “But not impossible.”

I ask her if we can play each other, and tell her not to feel sorry for me and let me win charity points. She laughs. “I will not feel sorry for you!” I serve first, and her return pings wide. Palina looks surprised. I take a little time to celebrate. 1-0. She takes the next 11 points in a couple of minutes. Each ball that comes my way, whether a serve or in open play, doesn’t look like it’s going to cause me much trouble. But they cannon off my bat in every direction. 11-1. “Why couldn’t I return your serve?” I ask her. “It’s not one serve,” she replies. “Each one had a different spin on it. I’ve practiced for 35 years.”

I thank her for the game. “You know,” she says, “if you hadn’t won a point we would have stopped at 10-0. This happens even in professional matches.”

“So that you don’t stick the knife all the way in?” I ask. “Exactly. It’s kind.” She smiles. “And it’s good to keep people playing table tennis.”