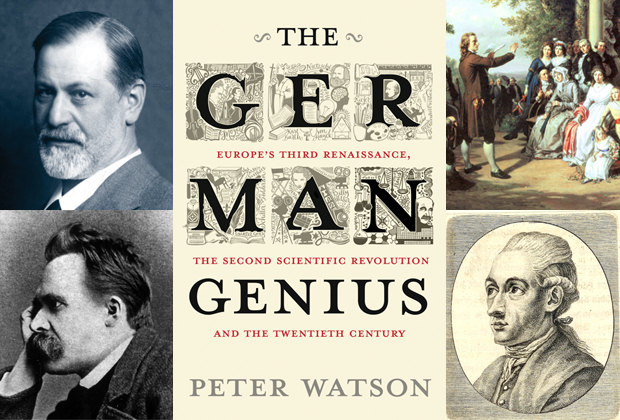 It’s time to put Hitler and the war aside and acknowledge Germany’s huge intellectual and cultural contributions to our world, argues writer Peter Watson. Exberliner interviewed the Germanophile Brit.

Journalist and intellectual historian Peter Watson’s encyclopaedic brick of a book The German Genius: Europe’s Third Renaissance, the Second Scientific Revolution, and the Twentieth Century is a voyage through the unsung intellectual achievements of 19th-century Germany.

Behind virtually every field – from philosophy and music to engineering, biology and modern academia – there’s a German genius to be uncovered!

What would possess an Englishman to write a 900-page book trumpeting the greatness of German thought and culture?

I wrote an intellectual history of ideas called Terrible Beauty, and when you look at the 20th century, you find that Germany leads the way all the way up to 1922-23. Although the Americans tend to self-satisfyingly call the 20th century the ‘American Century’, it really should have been the ‘German Century’. If not for Hitler, it probably would have been.

In the course of my next book, Ideas: A History From Fire to Freud, I was fascinated by the way Germany had managed to transform itself between the mid-18th century – when the country was really on its knees intellectually – and the late 19th, when it dominated the world.

The other reason is that I am distressed by the way the British and other nations haven’t managed to get over the Second World War. It seems we fight it over and over again every night on television.

If you were a German, the title could be perceived as nationalistic.

Several Germans told me that a German could not write this book. We deliberately didn’t put ‘Nazi’ or ‘Hitler’ or ‘Reich’ in the title. I don’t ignore the Nazis, but it’s not about them!

I found myself looking for the seeds of Nazism in every chapter.

That’s true. I think lots of people do look at history in that way. You can divide historians into those who do and those who don’t. I don’t think you should explain an historical event using backward reasoning.

Take science. The interesting thing about science is that it tends to move ahead accidentally. You cannot say really that earlier developments had a direct impact on later ones.

The same way the science of the Nazis can’t really be attributed to earlier German thinking, I don’t believe that you can see the roots of Nazism in the early 18th century [when the book begins].

In the late 19th century, though, there were clear indicators – openly anti-Semitic writers and odd theories about the Aryan race.

One reason is if you go back to a world before cars and planes, people don’t move very far and you get a big difference between landlocked countries and maritime countries. The maritime countries may not like the foreigners they are trading with, but they respect them.

In landlocked parts, you get these very weird racist ideas, you get the Ku Klux Klan or Nazis, because people don’t travel much and people look inward, and the foreigners become an enemy.

And what about the idea hijacked by the Nazis that Germany’s destiny is determined by its geography, a theory that justified the country’s need to expand for Lebensraum purposes?

If you look at Britain, you can’t change the shape of an island. The British know who they are. But what do you mean by ‘Germans’? The edges of Germany have always been very fluid. It has been encircled by France, UK and Russia. But I was trying to get away from politics; it is much more interesting as a cultural entity.

This definition of Germany as a ‘cultural entity’ brings you to conveniently include non-German nationals among your ‘German geniuses’, such as Freud and Kafka.

Aren’t you being a bit of a cultural expansionist here? What I mean is that they inhabited a German intellectual culture, the way Salman Rushdie is an Indian but also an English writer. There are many examples. I could have called it the Germanic genius but that would have been even more triumphalist.

They were both, interestingly enough, of Jewish extraction. Marx was also Jewish. Berlin’s Jewish Museum is filled with geniuses. Can you say something about Jewish contribution to the German genius?

Jews came into the picture rather late in the 19th century. I live with a Jewish girl whose family is from Russia… and I keep hearing from a lot of people that the Jews had a massive part to play in the history of Germany, but that just isn’t true. Not until the late 19th century.

Mendelssohn, the famous composer, was Jewish…

Of course there are examples. That’s not the point. But think Mozart or Wagner… Actually the modern musical cannon is almost exclusively German.

That’s a true cliché! Yes, but they don’t know the car was really invented by Germans, the pharmaceutical industry, etc. It’s just a historical blindness. I didn’t discover any new information. I just put it all between the covers of one book. And the point is to counter common stereotypes.

For example, in Britain, we place a lot of importance in Oxbridge and think that they were created in the 10th and 11th centuries which they were, but really they were theological colleges until the 17th century. We took on a lot of German ideas in the mid-19th century and that was a big turning point for all of us.

A key cultural moment you tackle in the book is the rise of an educated middle class, thanks to Protestantism, or Pietism in particular.

Well, Pietism enabled normal people to excel intellectually, it created a cultural state and it pushed Germany further and further ahead. The values of seriousness and hard work conveyed through Pietism made this life as important as the afterlife, much like in Britain with Puritanism.

Also, in Germany you have a set of nation-states with universities, which created a cultural competitiveness that accounted for the rise of the educated middle class. The education of the poor created an intellectuality in Germany that accounts for its predominance in the middle of the 19th century.

So, the 19th century was Germany’s heyday…

Yes, and that’s when Germany created the second scientifically minded revolution, which has inspired the whole world and which people don’t know was started by Germans. All this led to modernism, science and the death of God – which started in Germany.

You get everyone thinking Darwin invented the theory of evolution. Well, Darwin himself said he was much more popular in Germany than in Britain, and social Darwinism was a part of that, one of the black parts of history, which led to some of the wilder ideas of Nazis.

Describing the influence of German immigration to the US, which you refer to as the Fourth Reich, you quote someone who says, “America speaks in English but thinks in German and they don’t even know it.”

That’s very true. If you know America, the thoroughness and work ethic is far more Germanic than anything else.

In the back of the book you have a list of 35 underrated Germans. Do you have a favourite?

My favourites were the Humboldt brothers, Wilhelm and Alexander. Alexander was an incredible traveller and really developed himself. Another one is Engels, such a civilised man, he wrote so many books and his predictions were much more spot-on than Marx’.

Obviously Hitler ruined it all. What is left of the German genius now?

I think Germany changed in 1968; one generation turned on another, and Germany has become once again a completely different country. People are unwilling to admit what a success Germany has made of itself.

People say all the time, China, India and Russia, etc. are rising, and Europe is going down. Not Germany. Where would the Greeks and Irish be without Germany to bail them out?

I know ordinary Germans get rather pissed off about this, but at the moment this is where the German genius lives on: it is still arguably the most successful country in the world.

Well, they are traditionally more inward-looking than most, and this has kept them from their ‘long road to the West’, as it is said. I think they are getting over it now. I think they do now regard themselves as part of the West. That has by and large been achieved, although there may be a little way to go.

Last year Thilo Sarrazin’s book Deutschland schafft sich ab (Germany Does Away With Itself), which basically says that immigration is destroying the country, sold over a million copies…

I don’t think that shows much, except that Germany is the same as France and Britain. It shows it has sort of come full circle and that the ‘long road to the West’ is virtually complete. I would simply say to Germany, welcome home!