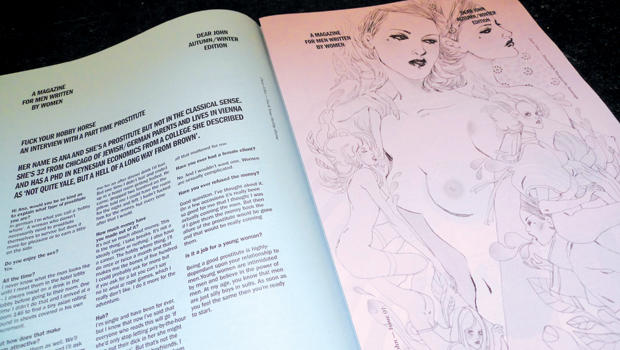 Attention guys: for those of you who don’t already have a mother and/or girlfriend to tell you the secrets of the fairer sex (and remind you that you’re a fuck-up), you might want to check out Dear John, a new Berlin-based bi-annual magazine (really more like a zine printed on large, multi-colored paper) written in English “for men by women,” which could be more about necessity than choice.

The mag is the brainchild of expat publisher/editor Conor Creighton, who says he loves women’s magazines and always nabs them from his girlfriend. And that’s the first curious thing about the mag: though it is written by women and about women, it’s edited and designed by men. Are there no female editors available in this town? Our evidence says otherwise. Is the content so scathing that it needs to be tempered by the opposite sex before delivery to the public?

Regardless, after shelling out €5 for a scant 20 pages of (very) large print, it may hit home when the cleverly written intro identifies you as a sucker for buying a magazine covered with rather handsome post-Klimtesque illustrations of writhing naked women in a ménage à trois. So you may be a chump, but you might just also become a reader, indulging in stories about prostitutes, waitresses, careless twenty-somethings, and midwives. If nothing else, your girlfriend will be impressed.