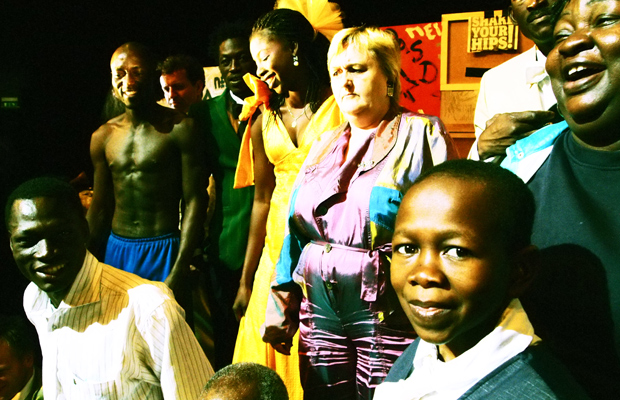 The man himself finally appears 80 minutes into the 90-minute show, a projection on a curtain of a man standing in front of a projection on a curtain. We’ve heard his emails, even seen footage of him in Africa. And now Christoph Schlingensief stands before us and addresses us directly for the first time, looking almost like a hologram. But is he present?

Schlingensief’s absence has become an almost overpowering aspect of Via Intolleranza II, which opened in the Bayerische Staatsoper München in late June of 2010, with Schlingensief himself still able to perform in person with the actors at the end of the evening. It was to be his last production directed to completion, as Schlingensief died just two months later on August 21 at the age of 49, thereby entering the pantheon of German genius artists.

But before his lung cancer diagnosis, before his bestselling memoir about the illness, before the sycophantic obituaries, Schlingensief was anything but beloved. He appeared in almost all of his controversial works: assaultive, anarchic, unbalanced, uncategorizable films (The German Chainsaw Massacre), stage productions (Rocky Dutschke ‘68), and art actions (Foreigners Out!). A Schlingensief is not a Schlingensief without the man himself – and knowing he would likely not live out Via Intolleranza II’s theatrical run, he wove this paradox into its complex fabric.

This work incorporates Schlingensief’s last obsessions: illness, death, saying goodbye and, above all here, his dream of creating an “Opera Village” in the West African country of Burkina Faso. This Operndorf, a project now being led by Schlingensief’s widow (and costume designer) Aino Laberenz, will include a hospital, a school and arts spaces, with a performance venue at its center. The idea is to encourage cultural exchange (the Europeans will learn African arts, the Africans will learn opera), while creating opportunities for creative expression in a place where more basic needs often take precedence. Half-ironically, half in total seriousness, Schlingensief sets up Intolleranza as a charity event to raise money for his Operndorf.

Simultaneously, the stage forms a rehearsal space for an adaptation of Luigi Nonos’s opera Intolleranza 1960 (1961), which they do not have permission to perform, so we never hear it. A crude director’s table sits down the stage’s center, set up with a lamp and a microphone so the director can reference texts and shout instructions. Long-time Schlingensief actor Stefan Kolosko plays the Director, serving as the representative (the representation) of the absent Schlingensief.

Issoufou Kienou, in a pale suit and blue bow-tie, begins the event quietly singing in French and playing guitar. After he exits, a charming German woman in a chic black dress takes the podium to tell us about the Opera Village, which has already raised a whopping €319! She jokes (or is she serious?) about the project’s grand ambitions being reduced to just importing the 10 artists from Burkina Faso who we will see perform tonight, and asks for our help to realize the full project.

Schlingensief cannot simply build his village un-ironically, bringing us dancing Africans and asking for our money, the way a telethon fundraising event might. He builds the whole terrible history of European-African “cultural exchange” into Intolleranza. Having cast himself as a new Colonial-Adventurer, traveling to Africa with a camera (shown in video projections) and his dream of a dark-continent Bayreuth, Schlingensief/Kolosko begins the rehearsal by screaming at the actors, especially the Africans. They cannot seem to get the representation he wants right. “Get away from me you black monster!” he squeals at one young man, with whom he had been playing a game of tag. An older woman, Kerstin Graßman, later scolds Kienou for costing the production so much money: his dark skin is more expensive to light than pale skin. Projected on the curtains behind them, horrifying images of voyeuristic colonialism: the Hottentot Venus, early Natural Geographic-style travelogues.

On the soundtrack too, Schlingensief juxtaposes and mingles the classical and modernist European tradition with various Burkina Faso forms. As a small band (the Fönix orchestra) of awkwardly dressed white people begin to play, several Africans add their own voices – and Kader Traore begins to loudly rap. Until a wild techno dance-party breaks out, strobe lights and all.

The Africans waver between being objectified as art objects – Kandy Guira even dances around inside a modernist paper-maché cone – and expressing their individual, complex identities: Amado Komi, who looks 12 and has been “kidnapped” by Schlingensief to play the role of a boy refugee, demands to be recognized as the 30-year-old man he is. The audience cannot tell sometimes if they’re just taking advantage of this show to leave Africa for Europe, and to hock their self-produced albums (available in the foyer). The Europeans on stage waver between kind-hearted but soft-colonial charity – teaching “modernist” dance, for example – and short-tempered outbursts of ugly racism, like those from Schlingensief/Kolosko.

All of this sound, movement, projection, and language becomes rather overwhelming at times. In exposing the contradictions inherent in his project and by engulfing the audience in more ideas and images than they can process, Schlingensief can embrace the complexity involved in European-African relations and make an end-run around the dangers of colonialism inherent therein. Schlingensief’s axioms – “Life is that which does not succeed”, “Art is magic” – the former projected on the curtain, the latter said by Kolosko, are both eloquently expressed through Via Intolleranza, as 1) this performance can transform individual lives; and 2) this performance cannot change anything.

“Schlingensief will not be coming tonight. He won’t be here ever again,” Kolosko says just before the curtains close for the final video. When Schlingensief appears at the 80 minute mark, feeling almost “in person”, Via Intolleranza could have become an act of mourning for this man. But instead of wallowing in self-pity in Schlingensief’s absence, Intolleranza makes a joke out of it (Kolosko repeatedly trips up: “Christoph is, I mean, I am…”), and uses it in the final moment to deliver a Schlingensief confession that actually wouldn’t be as powerful if delivered by the living man: “I want you to eat me, digest me, and shit me out. I want you to spread the shit on plants as fertilizer, and nourish yourself again.” The late director does become present, if only for the duration of the performance, in all his fervid, intellectually, and emotionally invigorating contradictions. Art cannot succeed in bringing Schlingensief back to us. But art sure is magic.