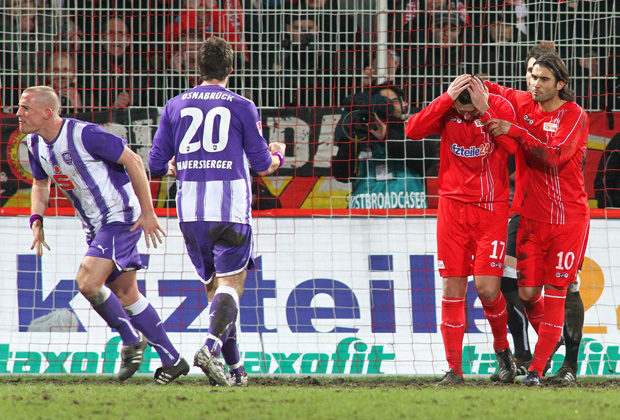 Why do you do this to yourself?

Refusing any kind of help

You’re not hurting no one else, that you can see

Why do you do this to yourself?

If you knew just how it felt

You’re not hurting no one else, ‘cause you can’t see

(Evan Dando: “Why Do You Do this To Yourself”)

Funnily enough I once saw Christian Arbeit at an Evan Dando gig here in Berlin. So he knows the song, but after Friday night he will be able to put the reference in a shiny new frame. The 1.FC Union PR maestro and stadium announcer had told me how he cried like a baby on the pitch at the Olympiastadion last week after the derby. He’d been supporting Union since he was 12, and this was the culmination of it all. Before Friday’s match with VFL Osnabrück he also told me: “For once, I’d just like to see an easy game, you know, with a three goal lead or something, just so we don’t have to worry.”

Tough break, Christian. Why do you do this to yourself, mate? Maybe Neil Young’s “Helpless“ would be a better call for all of those watching their “Derby heroes“ on the sand and mud-pit of the Alte Försterei as Union went two goals down, came back to lead 3-2, allowed Osnabrück back in at 3-3 and then missed a penalty at the end. Maybe Black Grape’s autobiographical album “Stupid Stupid Stupid” is just as apt.

In the first half hour Union had imposed themselves on their guests, but too often failed to pass the final necessary ball to a teammate. It’s the same old song. Football is a simple game, and it’s basics are it’s bedrock. Ball to feet, pick up your man. Neither of these were happening enough. There were a couple of lovely cameos, with Kolk particularly showing his grace and silky touch but the ball too often landed at the feet of the opposition.

Uwe Neuhaus’ 4-3-3 provided attacking guile, but too little width. Things were already clogged up in midfield when Sebastian Tyrala sized up a 35-yard free kick after half an hour. He hit it flat, a daisy cutter that caught everybody off guard. Well, apart from Tobias Nickenig, who had ghosted away from his marker and was all alone to chip the ball over Höttecke’s despairing lunge. It was too simple. A well worked training ground routine, not totally dissimilar to when Javier Zanetti peeled out of the wall to score against England in the World Cup all those years ago (why do I do this to myself?). He should have been picked up. The Union defence looked around at each other incredulously. It was someone else’s fault, surely?

A second free kick from Tyrala was bent beautifully inside the right hand upright shortly after the start of the second half. Two nil. The people of Köpenick, who have seen this all before, didn’t know whether to laugh or cry. This was supposed to be a celebration.

Union wouldn’t be Union if they didn’t make things interesting. The fans know that there is always a chance at redemption, and that their heroes won’t let them get too bored. Christian Stuff, the tallest man on the field headed an absurdly high and looping corner from Mattuschka in. A minute later Santi Kolk, who was actually offside by an inch, insouciantly swept home a Peitz flick on as the world turned underneath him, 2-2 and Union were dismissing all of the bad thoughts. It was Osnabrück’s defenders wondering what they were supposed to be doing. The substitution of Ede for Parensen had helped. Union had width where there had previously been none, and he too poked home as the away penalty area became a bedlam of disarray: 3-2. Easy.

Easy, Union? Never. Daniel Göhlert waved the ball along with a sleight of knee in the general direction of his helpless ‘keeper, Nicky Adler skipped on to it, rounded Höttecke beautifully and finished: 3-3.

Union are, after all, EastEnders. And the plot lines conceived out in a forest in Köpenick are just as ridiculous. There was still time for stuff to hit the bar from 25 yards and for VFL’s Björn Lindemann to handle in his own box. Penalty. The word Chris Waddle still can’t say, and that Lothar Matthaus wishes he could use as a method of settling divorces rather than having to go to court. He would always win.

Who else? Whose free kick had beaten Hertha, and whose song is the most frequently sung? Torsten. Mattuschka. Penalty.

Needless to say it sailed over the bar and into his stunned, yet still adoring fans. It was to remain 3-3. A game that Union couldn’t lose had turned into a cheap paperback thriller. And everybody knows that is the reason why the Union faithful are so faithful. They must need the Calvinistic self harming – maybe it’s this every week or sticking forks in your legs. That’s why they do it to themselves.