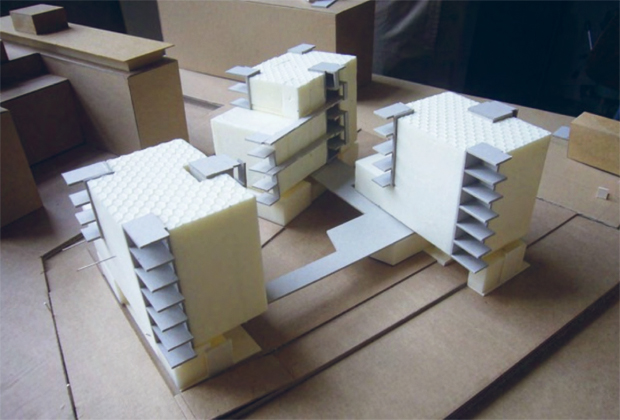 While experts and activists are busy discussing alternative scenarios for the riverside, one group has already set the future in motion.

Spreefeld, a cooperative of 16 people, many of them architects, has purchased the plot at Köpenicker Straße 48/49 (the site of the Kiki Blofeld beach bar). Their plan? Build a third, sustainable way on the Spree. While parts of their housing project will be reserved for the members of the cooperative, around 60 apartments will be rented at affordable prices.

On the ground floors of the three buildings Spreefeld has planned so far, up to 1500sqm will house cultural, social or neighbourhood enterprises, in an effort to fully integrate the development into local city life. And since everyone agrees the Spree banks should be made accessible to all, they’re planning a walkway along the river, complete with public gardening like in the Prinzessinnengarten on Moritzplatz.

More problematic was the future of alternative party landmark Kiki Blofeld. Due to the noise levels alone, it simply couldn’t be kept in its current form. Soon after buying the plot in December 2010, the Spreefeld architects Till Degenhardt, Christian Schöningh, Angelika Drescher and Claudia Sieper – who call themselves die Zusammenarbeiter – announced a competition for ideas for food and drink on the premises.

The idea is to preserve the former East German army boat house that has been Kiki’s indoor club for the past seven years and turn it into a café or ‘quiet’ bar. Kiki’s owner refused to enter the competition, but after some legal wrangling, Spreefeld agreed to keep the beach bar open until the end of the season this year, until construction starts. Spreefeld is also talking with their immediate neighbours, KaterHolzig (the new Bar25 party playground), about a concept for a bar in the space.

Spreefeld is a rather quiet, pragmatic project, which attempts to address concerns about private investors shaping development in the area. Is it really the model project it claims to be? A ‘Third Way’ between the ever-temporary projects reserved to the alternative class and more needless offices or faceless shopping malls with the aesthetics of O2 World?

We may not know until the project plays out, but compared to the pseudo-anarchist slogans of the naysayers and the glittering towers of Mediaspree, Spreefeld seems very reasonable indeed.