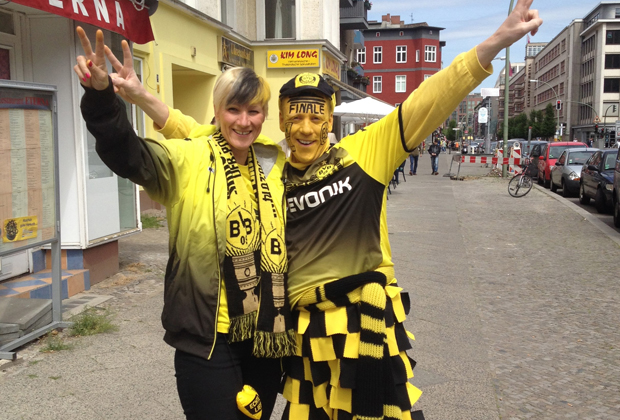 As a third-generation fan of a certain London football team of varying fortunes, I know obsession when I see it. The face-paint and euphoria, the 100 percent sweat-inducing polyester shirts, the itchy scarves: the whole bright-eyed nine-yards of pre-disaster fandom.

The Borussia fans brought it all horribly back on Saturday last. And there were a lot of them. In terms of effort, they’d won before the game even started: carloads of yellow and black cruising up and down Ku’damm, honking, singing and maybe just celebrating a weekend away from life in the fleshpots of industrial toil? Whole swarms of bees on the pavements outside Burberry. Of the boys in red I saw only two: elderly gents in jeans hanging disconsolately around Adenauer Platz.

Traditionally, Ku’Damm is pre-and post-match cruising territory. But this was something else. Why so many? It got me thinking – and as I thought, I realized that Borussia and West Berlin have quite the love-fest going on:

It took me a while to work all this out and by the time I’d got it all sorted, the game was over. But just in case any of you read Exberliner, please know that historically, sociologically and empathetically speaking, you have a friend. Or to put it differently: “Ich bin ein … Dortmunder.”