Ayran is a Kurdish village in southern Turkey. It is home to fights, motorbikes, stories of evil spirits… and, in the summer, to many Berliners.

The dolmuş – a Turkish minibus share taxi – jumps and bumps along the uneven road while furry dice with the name of Allah on them dangle from the rear-view mirror. Outside, there are arid, parched hills, pistachio and olive trees as far as the eye can see – a precursor to the great deserts of Syria and the Middle East. We are headed to Ayran, a Kurdish village in south-eastern Turkey, home to around 5000 people. It is summer and I am travelling with Hadice Kalender, who was born in this village in 1970. When she was 16 she underwent an arranged marriage here and, a couple of years later, like so many from Ayran, she emigrated to Berlin.

Upon arrival we are greeted by a flock of sheep, who welcome us by kicking up a heap of dust in our path. The street name is spray-painted on a piece of tin on the corner, while scrawny street chickens scurry across the pavement. Houses hide behind verdant yards planted with fig and pomegranate trees. “You’ll notice that all the trees bear fruit here,” says Hadice. “Things grow here. Not like in Brandenburg, where the only things that grow are potatoes.” Hadice’s cousin’s house is cool and dark inside. The concrete floors are raw and laid with colourful carpets. There are a couple of beaten-up sofas in the living room and no pictures on the walls. There is no hot water and instead of a Western toilet there is a hole in the ground. Everyone is sitting outside in the yard, the centre of life here, which is full of mud, muck, blood, ashes and chicken shit. Red peppers are laid out on plastic to dry. A woman is cooking peanuts in a cauldron, children are playing with a couple of old dolls, while one of the boys ties a piece of meat to a string and baits a neighbourhood stray, hoping to adopt it as a de facto pet.

Soon Ismail, Hadice’s cousin, arrives, pulling his beat-up old Renault into the yard, the car stereo blaring Turkish arabesk music through the open windows. Ismail, shirt covered in sawdust, heads straight inside and flicks the TV onto the news round-up of the juiciest violent incidents, shootings, car crashes, attempted suicides and martyred soldiers in the fight against the PKK. He turns it over to a Turkish soap opera before kicking back and settling into a Western; he is a big fan of American Westerns, he tells me. He loves John Wayne. And even though we try and get to know each other with our very own “Tarzan language”, as Ismail puts it, we don’t get very far and I decide to take off to see a bit of the town. 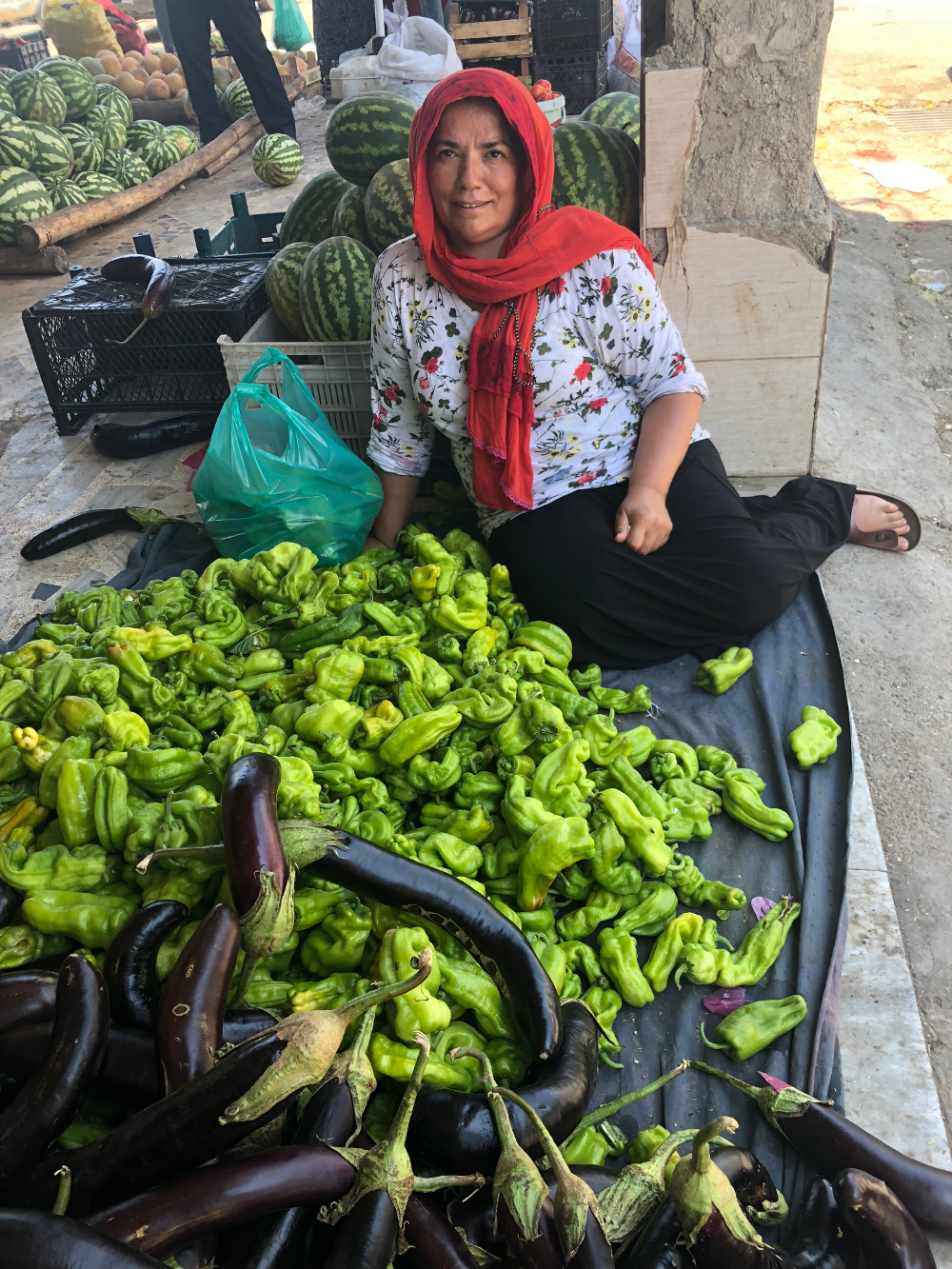 Walking through the dusty streets it doesn’t take me long to come across a pocket of young people speaking German. Berliners, in fact, here for the summer with their parents. I strike up a conversation with Bülent, who lives in Moabit, and Mehmet, a Reinickendorf local, and we head off to a local tea house for a soda pop and a chat. Amid the chatter of the chain-smoking old men playing cards and okey (a tile game also known as Rummikub, brought to Germany by the Gastarbeiter) – and the incessant swarm of flies – the teenage boys tell me about their lives in Ayran. For the young Berliners, it’s a summer of freedom, made up of motorbike riding, playing with the village animals and going to discos in the nearby town of Birecik. There they attempt to flirt with the local girls while evading their fathers, who if they find out, stand to fix them up in an arranged marriage. Chatting to them, I get a sense of the different way of life here in Ayran. “Here we can ride motorbikes. We’re not actually supposed to without licences – just like in Germany – but there’s less stress. You can get away with it. You can talk to the policeman and tell him ‘I’m the son of so-and-so’, or ‘the grandson of so-and-so’, and if they know him then they just let you go.”

Bülent and Mehmet are just two of the many Berliners that make the trip to Ayran every summer, maintaining a long connection between the two places. The first immigrants from Ayran moved to Berlin in the 1960s as Gastarbeiter, and even today about half of the town either have relatives in the German Haupstadt or live and work abroad themselves. And while most of these original expats have since passed away, many of their children and grandchildren still come back to the village to visit during the summer. However, despite the strong connections, it seems the Alamancı, as the Germany-based Turks are known here, often rub the locals the wrong way by rocking up in their flashy cars with Berlin number plates and splashing cash during their stay. “They show up in their fat Mercedes and Jeeps,” says Hadice. “You see the kids. They get their money from the Jobcenter in Berlin. They work as cab drivers or they work under the table. All haram, but they have everything. As for the people who live here year-round, the only thing they want is money, pistachios and olives. That’s all they care about.” In terms of the tension, Bülent and Mehmet have seen first-hand what it can look like. “We have a lot of fights with the people here who don’t live in Germany. It’s been like that for years. They think that we shit money and are stuck-up.” Mehmet adds: “Here we’re regarded as Germans and in Berlin we’re foreigners. You’re never at home. But here, us Germans stick together, regardless of whether we know each other or not. There are a lot of Germans here in the summer.”

Meanwhile, it’s not only the locals giving them a hard time. As Kurds, both Bülent and Mehmet know what it’s like to be placed under pressure by the state. In Ayran, people are prohibited from proclaiming allegiance to Kurdistan, or even from wearing jewellery with Kurdish symbols. “It’s a bad time to visit Ayran because of the problems with the authorities,” says Bülent. “People who voice an affiliation to Kurdistan are regarded as terrorists.”

Despite some of the tension, it appears that the connection between Berlin and Ayran still runs deep. Mehmet and Bülent tell me that there are still people from Ayran who want to strike out a new life in Berlin, while on the other hand, there are also some in Berlin who want to trade the hustle and bustle of the big city for the quiet life in Ayran. “It’s a funny thing,” says Bülent. “People don’t want their kids to end up in prison, so they often come here where it’s safer,” he says, noting that the temptations of a big city like Berlin can often lead young people into a life of crime. An example of this was seen about a year ago when Bekim Barış, a young man from Ayran, was shot and killed by the police in Berlin during an attempted burglary. There was a big funeral ceremony at the Şehitlik mosque in Neukölln. The body, followed by Barış’ family and friends returned to Ayran for the burial.

Meanwhile, like a lot of small towns, Ayran is filled with plenty of local stories and folklore. One popular tale is the case of a local woman who some say was possessed by a jinn – an evil spirit. “Stuff like that gives me the creeps,” says Mehmet. “We don’t know if it’s superstition or if it’s true. But her two children died and her husband as well. She went to the graveyard every evening, then one time a car came along and she just jumped out right in front of it.” Back at Hadice’s cousin’s house, I hear another about the first Ayran local to leave for Berlin in 1964. According to the story, he went to work for Mercedes and had nine children. However, like many from the village, he married a relative, and a number of his children had disabilities as a result. The man apparently even made the local news in Berlin back in the 1990s for attempting to throw one of his children out of the window. “That’s how it is here,” Hadice tells me. “There are hundreds of such stories. Everyone has a disabled child.” Sitting on the roof, drinking tea and chewing tobacco in the warm night air, an emotional Hadice reminisces over her early years in Ayran. There are the good memories, such as tending to the sheep and making bread, going from door to door to share it with the neighbours; and the bad ones, like her marriage to her cousin, which she was forced into, kicking and screaming, so much so that she needed to be sedated with tranquillisers to get through it. Although she has been a Berlinerin for 30 years, Hadice says that she still has strong feelings for Ayran, and the trips back here during the summer help her deal with her homesickness.

The next morning roosters bring in the dawn. The ezan – the call to prayer – lingers in the air. Today is Kurban Bayramı, the annual Muslim festival known as the ‘Feast of the Sacrifice’. Outside, cicadas hum and chickens peck about the empty lot opposite the house. The goat next door munches leaves, then bleats, perhaps suspecting what lays in store for it today. A neighbour fetches some bread and comes back with two loaves under his arm. This is the Ayran life, I think to myself. Hadice says her cousin pays just €150 a month for rent, and for a moment I catch myself thinking that I wouldn’t mind moving down here, sustaining myself with writing articles and teaching German – Germany is still the promised land for many here, after all. But even though no one has work here, they seem to have a lot that anyone would wish for. “Here, the people are happy,” Hadice says. “Look at them. It’s a great life. They screw and make children. There is enough land for everyone. What else are you going to do here? In a way it’s an ideal life of harmony.”