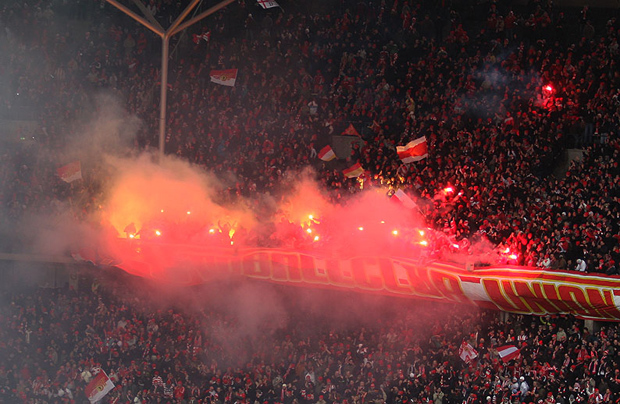 On Saturday, as Santi Kolk finally found himself a bit of leeway to wriggle through the right-hand side of Hertha’s defence, the Union fans were singing their favourite song “Dem morgengrauen entgegen, ziehen wir gegen den wind”. It was apt, they were playing two opponents. Not just the Bundesliga hopefuls Hertha, but the conditions.

The Olympiastadion is made for drama, its historic façade somehow enhancing the action despite the huge distance of the stands from the pitch, but it is also bastard cold and windy. The conditions are amplified by the open end, but the atmosphere was rocking – 74,244 people crammed the old place to the rafters.

Kolk’s beautifully weighted slide rule pass, square to Mattuschka, was perfect. Paced like Steve Ovett, it languorously rolled, taunting the Hertha defenders. One of them clattered Mattuschka and immediately, as he sized up the free kick, the song from the fans in the corner changed to the inevitable burst of “Torsten Mattuschka”, sung to the tune of Andy Williams’ “Too Good to Be True”. They were imploring their captain to do what he has done so many times for Union and just rifle the free kick home. In the peculiarly used words of Richard Keys, “to smash it.”

‘Tusche is known for his free kicks, the winner against St. Pauli last year was perfectly executed and shot through the eye of a needle into the corner. This time, though, he was under pressure. Since being stuck in hospital at the end of the Hinrunde with a worrying wound in his leg and a weird virus he hasn’t been the same player. Although Uwe Neuhaus always demurred on the subject, there was talk that he could have lost his place. His song wasn’t even being sung as regularly.

He hit it true, and with that goalkeepers nightmare, bouncing once in the six yard box. Aerts should have saved. He got a hand to the ball, but only as it was too late and it slipped inside his near post. He’d done it, Torsten Mattuschka had put Union in the lead in the Olympiastadion.

As the flares in the stands burst into bright life and their smoke was quickly rushed around the stadium all that could be heard was that song. Union were 2-1 up against Hertha, the big club who disdain them so. 2-1, Auswärtssieg. They had been clinging on in places. Rob Friend hit the post when scoring would have been easier and Adrian Ramos side footed wide. There were times, particularly in the opening 20 minutes, when it looked like Hertha would have destroyed Union. Their pace and width forcing the Köpenickers backwards and into making errors.

Peitz, though getting a medal for playing with the broken nose that has kept him out for two weeks, made a stinker of what should have been a simple clearance for the opener, gifting the ball to Mijatovic. He crossed and Roman Hubnik headed home, unmarked at the far post. It was too easy. Marcel Höttecke’s nervous kicking didn’t help. He made a couple of vital saves with his fast hands, but when the ball was on the floor there was an intake of breath every time he went near it. The wind wasn’t helping anyone with nerves.

But Union are strong inside. If you excuse the pun, they have mettle. The 4-1-4-1 formation was not designed to flow and charm. It was designed for pragmatism. To stultify Hertha’s attacking play at the source. With Raffael drawn into a midfield battle he couldn’t be arsed with, it also worked. As the first half went on Union had a glimmer of hope. And then more so.

Christian Stuff, an indefatigable centre half found himself in space on the right and humped a long ball in the direction of Mosquera, working a tough shift on his own up there. The Columbian controlled it with the top of his shoulder (my Hertha friends say it was his arm) letting it drop before spinning and hitting it first time into the far corner. It was a beauty. A joy. A classic centre forwards goal from a centre forward that doest get nearly enough.

The game was on, the flares were out and the Union fans sung their hearts out.

At the final whistle, as Peitz took over the megaphone he had forgotten his mistake for the first goal. All was forgiven. Hertha were inconsolable, they had lost a game that Union shouldn’t have had a hope in, and (as seems still likely, despite Saturday’s result) when they go back up to the Bundesliga, they will be reminded for a very long time that they still haven’t beaten 1.FC Union in the league.