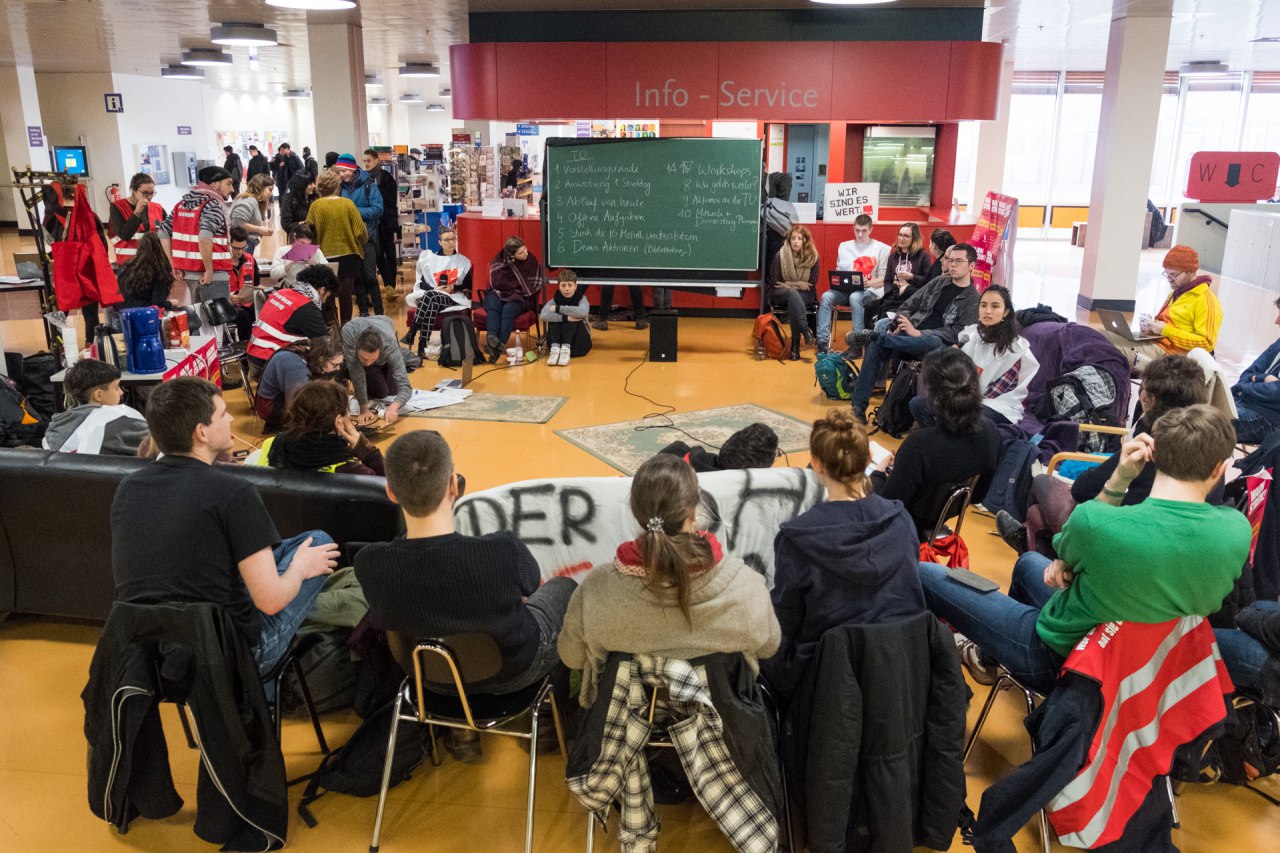 I’m not a student anymore. But when I need to write, I still go to the CampusBibliothek at the Free University, the Grimm-Zentrum at the Humboldt University or the Volkswagen-Bibliothek at the Technical University to write. These are just three of Berlin’s many university libraries, and they provide a warm, quiet space to think and read.

Well, normally. Last Wednesday at noon, a hundred people in front of the FU’s main library in Dahlem blocked the revolving door while chanting: “Tarifvertrag – jetzt!”. Many more libraries closed at 7pm, even though they’re supposed to be open to 10pm or even midnight.

What’s going on? As we reported two weeks ago, Berlin’s student employees are on strike. The 8000 Studentische Hilfskräfte or SHKs are students who do part-time jobs at the university. They work 10 or 20 hours per week, making €10.98 per hour. They keep the libraries open in the evenings and on weekends, as well as assisting professors and doing all kinds of administrative jobs.

The SHKs haven’t gotten a wage increase in 17 years – that’s why they’re fighting for a new collective bargaining agreement.

There was a first strike two weeks ago with over 1000 people gathering on Bebelplatz opposite the Humboldt University. And a three-day strike took place last week. On Thursday afternoon, 1000 demonstrators gathered at the zoo and marched to the Technical University. I can’t remember a union protest where people were still shouting slogans after two hours.

When you walk into the Free University, you can normally walk right up to the info counter to get some orientation. But it was closed for three days. The same thing with the computer laboratory and the printing service. They all have signs: “Do you want to complain? Please send an e-mail to [email protected]”.

Some students complain about these small inconveniences. But strikers point out that the university presidents could end the strike at any time by offering decent wages. The trade unions ver.di and GEW, representing the SHKs, are demanding €14 an hour to make up for the decline in real wages since 2001. Does €14 seem like a lot? This just makes up for inflation over the last 17 years.

Every day, strikers hold assemblies, go through the lecture halls with megaphones and demonstrate through the cafeteria. An assembly at the FU demanded to continue the strike for five days next week. They have gotten a lot of support.

Last Tuesday, the striking students from the FU visited striking metal workers. Their union, the IG Metall, is in its third week of “warning strikes”. They want six percent more pay, as well as the option to work part time for up to two years and then return to full time work.

I was worried: Would the metal workers like the students? I imagined bulky men with mustaches chasing off the offer of solidarity: “Get a real job! Get a haircut!” Maybe my image is from the 1970s…

It turns out that students and metal workers have a lot in common. As strike activist Yunus Özgür from the Free University pointed out, “Rents are increasing for us as well as for you.” And academia, just like industry, is using limited contracts and temporary labour in order to lower wage costs. That’s why it made sense to stand together.

So yes, the strike is a bit of an inconvenience for me too. But even when I’m trying to write, I enjoy being interrupted by a flashmob. The people keeping these libraries open deserve a decent wage. So far the universities haven’t budged. That’s why I’ll be at the next strike this Friday.