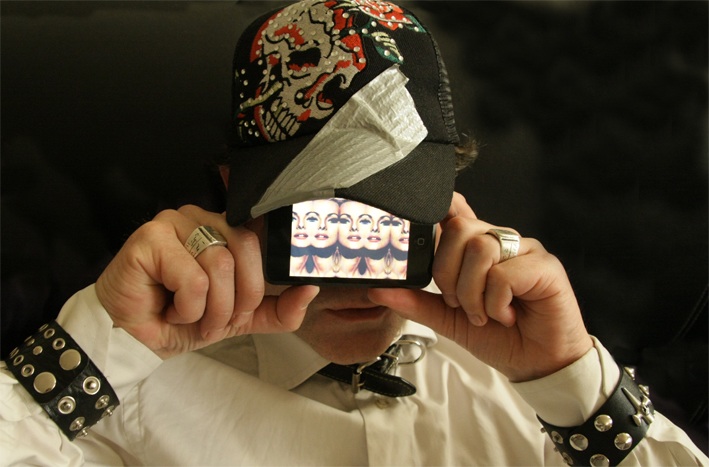 VJDJ Purio, writer, experimental filmmaker, video/DJ, and artist, is a staple of the Berlin club scene, being an active influence and witness to much of its development since the early 1980s. Through the years, he has been involved as a MTV master of ceremonies, a VJDJ (combined party performance of DJing and video projection), a historian through video and writing, as well as being a regular in Cornelius Opper’s lineage of clubs in the city.

The Rio Club Experience Video Book, which he made in the early 2000s about Opper’s epic club can be seen at Art Village at the Berlin Festival. The video book is the nucleus of the Berlin-based music festival, showing the origins of a party-people movement that marked itself a decade ago and grew into what the festival has become today. Fridey Mickel talks with him about the video and his thoughts about the festival.

What’s the story with the video?

Back in the day, I sat down and started to write a book about the Rio Club on a typewriter. I had become this kind of musical writer, I was writing about the music scene and especially about the art-angle of Conny Opper’s beautiful doings. When it was finished, I went to this copy shop on Kastanienallee and made the one and only copy of a fantastic piece of work.

My friend Nigel read it and said, “You know Natz, most of the people won´t read the stuff, Ravers are not into books these days. Why don´t you make it into a video?” Since I was also an experimental filmmaker, I thought, “Great idea. How about creating a video book on DVD,” and thus it was called: The Rio Club Experience Video Book. We got ic!berlin as a sponsor, printed a run of 1500 and did a book release party at Rio.

With this DVD, suddenly the Rio Club was on the music mental map and the club was the birth-giving idea of the Festival later on. You could see this handheld footage of a regular wicked and normally crazy Rio Club night, while listening to my analytical music business mumblings, coming from my experience as a music video person and my experience on tour with bands like the Simple Minds, Depeche Mode, the Chameleons, the Name, John Cale and what have you.

The Rio Club Experience Video Book started to make the idea of the Rio marketable, because it was wrapped in a nice way. If you look at the girl’s eye on the cover, she is having the white cross in her eye and that was invented by us. If you look at the Berlin Festival bear on the posters and flyers, the bear has a black cross in his eye, touching on the essential idea.

Why should the ART VILLAGE be so chaotic?

It’s more about the underlying mental attitude and virtual performance.  I went around the Art village several times and it seemed to me more like a circus, where strange people try to attract maximum attention by doing weird things. I could not find my monitor, where the video book was being screened, but that’s the whole point.  You don´t need to propel proper fine art at a disused airport or within a rock and roll art village context.

It’s extraordinarily important to appreciate the Art Village angle of the Berlin Festival. It’s an honour to me, that Conny says, “Hey, let’s screen your video book at the village”, because I tried to get onto the big stage with my VJDJing and I kept pestering Opper for four months, but they just won´t get it, that somebody like me is the next big thing on a classical stage gig, remixing and editing off Soundcloud, projecting animated 2D pictures on top, all being fired off of two Ipods.

How, in your eyes, has the dream developed?

If you look at the line up one must say it’s great, they have done a very good job, because the people really come here for the sake of the music, so that’s that. The Berlin Festival has made its mark, it’s on the map, but quality-wise, if you look at what you get for 99 bucks, with the battling public address systems: why are they so small and the sound so borderline?

And how could it be better?

This is Berlin. Instead of building new quality housing, can´t we just rock the boat big time so that half the town can hear it, ignoring the festival mafia kind of thing, Rock am Ring and all the wannabes, so that even the best kids will say, I went to THE FESTIVAL and I lived there for three days in front of the mega stage.