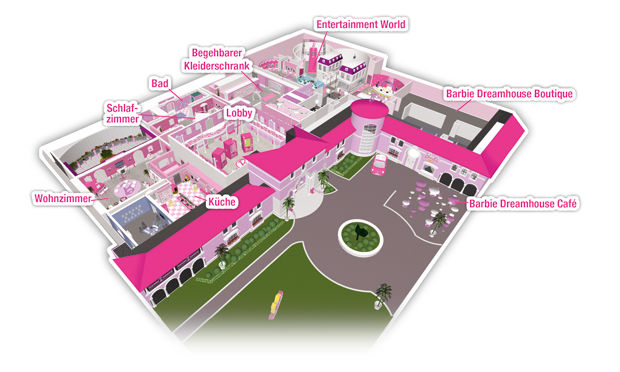 Friday saw the “unveiling” of the Barbie Dreamhouse to members of the Berlin press. The temporary building behind Alexa had already been hailed as a tacky and rather tasteless way to inundate German girls with Mattel’s multimillion dollar “dream machine”. Barbie’s fantastical, anorexia-inspiring body measurements aside, everyone there seemed curious about what Thomas Lüdicke, the businessman behind the project, had in store for the girls of Berlin. And we had some real fun, although maybe not of the type the PR team had dreamed up for the dream house!

After the press were greeted to Barbie’s half-built world, with only three rooms of puke inducing pink (one was actually blue, but it’s oversaturation had the same nauseating affect), the round of press questions turned into a minor scandal as Michael Koschitzki, 27, of “Occupy Barbie Dreamhouse” (self-appointed nemesis of the plastic blonde) made a surprise appearance. After questioning the intent and purpose of such an “interactive exhibition” for young girls, Mattel reps and EMS (the company behind the Dreamhouse) were visibly on the defensive:

“Barbie presents many options for girls as a role model… there’s a president Barbie,” the Barbie lookalike Mattel rep countered.

“Yes, but where is that represented here? The first thing people see here is the kitchen!” Koschitzki said, referring to the half-built Barbie dream kitchen where little girls can make “virtual cupcakes”. Other career options presented in the Dreamhouse sum up to pop star or fashion model…

Being a Barbie Girl in a Barbie World may be what the Dreamhouse wants to offer girls, but there’s trouble in the world and justifiably so. I for one, am glad we live in a city that serves that up.