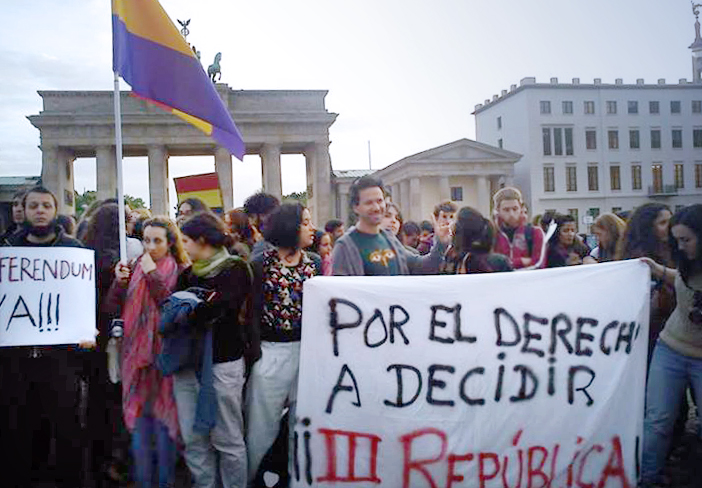 On June 2, King Juan Carlos I of Spain announced he was abdicating the throne to his son Felipe. That very evening, 300 people gathered at the Brandenburg Gate in Berlin to demand that the son and the whole family leave as well. There were dozens of demonstrations across the Spanish state. The young peopled called for “the right to decide”: they want a referendum about the “Third Republic”.

Back in 1931, Alfonso XIII fled Spain when the Second Republic was proclaimed. Even though Alfonso supported the fascists in the Civil War, the new dictator Francisco Franco didn’t want the royal family to return. Only at the end of his life did Franco begin to groom Alfonso’s grandson, Juan Carlos, as a successor. He became head of state in 1975 and has stuck around for almost 40 years.

Spain’s monarchy is at the nadir of its popularity. In the midst of an endless economic crisis, with unemployment over 25 percent and hundreds of evictions every single day, the aging monarch went to Botswana to hunt elephants. Son-in-law Iñaki Urdangarin and daughter Infanta Cristina have been charged with corruption. And the monarchy represents the keystone of the political regime of 1978, which has been challenged by millions of young people occupying plazas and demanding “real democracy now”.

Just a kilometre away from the demonstration at the Brandenburg Gate, construction is in full swing for Berlin’s City Palace. It was supposed to cost €590 million. It might end up closer to several billion. And what is this for?

It’s not entirely clear if Berlin’s current rulers have noticed that the Prussian monarchy has been gone for quite some time. On November 10, 1918, while his capital was in the throes of revolution, Kaiser Wilhelm II left for the Netherlands and took his dynasty with him. While there are still a few monarchists in Germany who want Wilhelm’s great-great-grandson to restore the House of Hohenzollern to power, there are still no plans to have a member of that dynasty move into the new palace.

Now is there any danger of the Prussian kings returning? Might sound like a crazy idea, but think about it: why would the German government spend a billion euros to re-build an imperial palace? If all we needed was a space for museum exhibitions, there was already a perfectly good “Palace of the Republic” in the spot which had been cleared of asbestos yet was demolished out of pure historical spite. With the limitless popularity of Game of Thrones, perhaps people in smoke-filled rooms have decided the time is right to turn back the clock of history.

So will the Spanish monarchs be invited to Berlin? Would it make sense for the House of Bourbon, like so many of their countrymen, to move from the Manzanares to the Spree? It is in this context that I think the guillotine has gotten a bad rap. The guillotine was invented during the French Revolution as a means of execution that was both humane – at least compared to strangulation by hanging or decapitation by axe – and equal for all citizens. It might sound gruesome, but the swift drop of the blade seems preferable to being ruled by an aristocrat, right?

Then again, let’s not be bloodthirsty. Back in 1993, the Canadian acapalla band Moxy Fruvous produced a roadmap for precisely this situation. Their “King of Spain” tells the story of a monarch who decides to leave his position in order to work for minimum wage at a pizza joint in Canada. “So next time you drool in the pizza line, remember, slower pizza’s more luscious. The King of Spain never rushes!” I think when Felipe survey’s his options he’ll see that pizza selling isn’t so bad.

* Correction: In the original version of this article, the name of Infanta Cristina was incorrect.